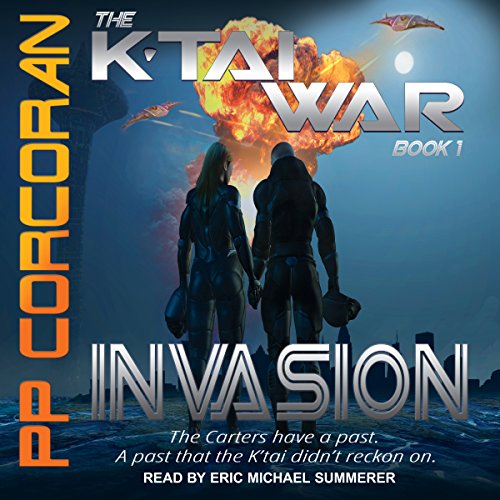 By: PP Corcoran
Narrated by: Eric Michael Summerer
Try for £0.00

Humanity, previously dependent on the K'Tai for its Redlazore, discovers vast resources of the most valuable mineral in the galaxy on Agate and is now free to expand across the stars: Redlazore is also the key component to faster-than-light travel.

The planet Agate is, however, the human colony-world which lies perilously close to the K'Tai Imperium, and the K'Tai resolve to put the upstart humans back in their place.

The K'Tai Imperium invades Agate. On the ground, in the midst of the whirlwind conflict is the Carter family: Dave, a mid-level exec, is working in downtown Gemini City; his wife, Sue, a high school teacher, and their teenage twins, Jodee and Chris, are on a school trip to a Redlazore mine.

The K'Tai soldiers of the infamous Black Legion descend on Agate, opposed by the meager, poorly armed militia and a sprinkling of regular marines. The planet and those upon it are engulfed in the flames of war.

The K'Tai, however, did not count on the Carters. For the Carters have a secret. A secret which will cost the K'Tai Imperium dearly.

The Carters are Agate's human population's only hope.