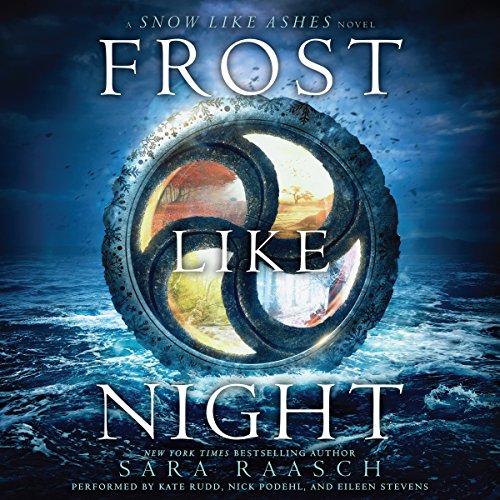 Game of Thrones meets Graceling in this shocking and action-packed fantasy - the highly anticipated final book in the New York Times best-selling Snow Like Ashes series.

Angra is alive, his Decay is spreading - and no one is safe.

Meira will do anything to save her world. With Angra trying to break through her mental defenses, she desperately needs to learn to control her own magic - so when the leader of a mysterious Order from Paisly offers to teach her, Meira jumps at the chance. But the true solution to stopping the Decay lies in a labyrinth deep beneath the Season Kingdoms. To defeat Angra, Meira will have to enter the labyrinth, destroy the very magic she's learning to control - and make the biggest sacrifice of all.

Mather will do anything to save his queen. He needs to rally the Children of the Thaw, find Meira, and finally tell her how he really feels. But with a plan of attack that leaves no kingdom unscathed and a major betrayal within their ranks, winning the war and protecting Meira slip further and further out of reach.

Ceridwen will do anything to save her people. Angra had her brother killed, stole her kingdom, and made her a prisoner. But when she's freed by an unexpected ally who reveals a shocking truth behind Summer's slave trade, Ceridwen must take action to save her true love and her kingdom, even if it costs her what little she has left.

As Angra unleashes the Decay on the world, Meira, Mather, and Ceridwen must bring the kingdoms of Primoria together...or lose everything.

excellent plot, excellent characters, excellent narrators - everything you could want for in a book.

Not the best book series I've ever read, but still worth a listen if you have some free time. It's quick and easy and doesn't require much thought (brain candy). There are some really nice undertones despite not being very long or descriptive. I would definitely recommend to younger girls looking to get into the fantasy genre.

Frost Like Night did not fail in finalizing the fate of the Winterians. This novel brought the Snow Like Ashes series to an end in a satisfying way. I let out a long sight of relief at the finale. There was a heart-breaking moment in the novel that moved me to near-tears, but I had to hold myself together.

I was nervous throughout the entire time. Like many times I read, I could not help but wonder, "who will the author kill off?" That constant anxiety kept me reading more. I will not reveal any details about whether Raasch did so or not. I will let you figure that out on your own. Just note, that like the previous two novels, the author does an amazing job!

In all, this entire series was amazing, and I cannot wait to read more of Raasch future works. I know she has another novel out, The Rebel Waves, so I will have to check that one out as well. I extremely enjoyed Raasch writing and the way she captivated my attention with her Snow Like Ashes series.

Rudd and Podehl returns to narrate the final part of this series and does an excellent job. They are joined by a third narrator, Eileen Stevens, and this change in narration from the first and second novels  gives the listening experience a fresh flavor each time. I extremely enjoyed listening to the entire series. For those of us who like to multitask and listen on the go, I recommend listening at a 1.5 speed, so one does not miss anything. For those who are listening while reading the book, I found 2.0 and 2.5 speed to be the best speeds. 3.0 was too fast for me, and I was missing a lot of what the narrator was saying and had to eventually slow down the narrator's reading speed.

Entertaining with a few surprises. It keeps you reading even tho you know how it’s going to end (and you are glad for that!) but how the adventure unfolds captures your imagination. The characters are especially engrossing and well developed.

A beautiful and wonderful ending to the series!!

AMAZING fantasy trilogy and was beautifully narrated (but I did not care for Ceridwen's narrator). Despite all of the loss and chaos that a war brings, happiness endured. Super impressed with the world and character building along with the unique twists and turns in the plot. Loved the use of magic in this trilogy. Out of the three, the first book was the best anf my favorite, but every book brought such vivid color and detail that it was hard to feel unattached to the story. I am so sad that I will not be reading about these characters any longer. Well done Sara Raasch.

After the first book, I did not realize how much this world affected me. I had to get the second and third book Immediately. I truly enjoyed this world.

Overall I loved this series!

There were some spots where I was like, oh come on and you know what you should do, but I still loved every bit of it!

Good, but a teenage angst feel

Narrator was fine. The story was good but I felt like it was Moore approriate for a younger crowd.

enjoyed all 3 books & the narrator's - only thing I'd change is having each narrator know how to pronounce a characters name - example in book 2 I believe it was Lakin but Seredwins narrator in book 3 calls him Lincoln - listening to the books rather than seeing the written word which is it???

Good conclusion to the series...

This is the third and final book in the Frost Like Night series. I enjoyed it but not as much as the first two books in the series. There wasn’t a lot here that I found surprising and the majority of the book is focused on the coming (and final) war between Angra and the other Kingdoms. I am not a huge fan of “war” books in general.

I listened to this on audiobook and it was okay. I liked that the three different viewpoints (Mather, Meira, and Ceridwen) are done by different narrators. However, most of the book was from Meira’s POV and I thought her narrator was a bit annoying to listen to; she was just a little too desperate and dramatic sounding about everything.

The book itself is fairly predictable, but I enjoyed the journey. I do like that Meira was smart and decided to take time off to train in her abilities (rather than instantly learn how to use them). Although the fact that Meira masters both her emotional issues and her magic abilities in a week is pretty unbelievable.

We hear quite a bit from Ceridwen in this book as well. I enjoyed her as a character and thought she counterbalanced Mather and Meira’s stories nicely.

I continued to be impressed by the world-building here; this world blew me away in the first book and the impact is less now that we are familiar with this world but it is still av ery creative world that I enjoyed reading about. I am not going to say much about the whole Mather, Theron, Meira thing because of spoilers.

Again, I don’t know if it was the narration or what but everything in this book was just a bit too dramatic for me. There are lots of speeches by the characters and you get to listen to them angst over everything that is happening over and over again. This was probably what annoyed me the most about this book.

Overall this was a good conclusion to the series. Things are wrapped up nicely and readers should be happy with how everything ties up. I do think it got a bit wordy and overly dramatic at times; there are a lot of speeches and long ramblings by characters on their thoughts and feelings about things that didn’t need to be there. I would recommend this series to fantasy fans; the first two books in the series were spectacular and this one (while not as good) did a good job of wrapping things up.

I enjoyed this series. I liked how she tied up the loose ends. But I found myself having to relisten to parts because it wasn't keeping my attention.