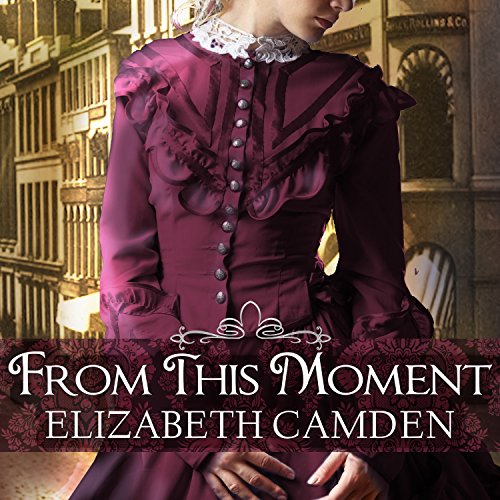 By: Elizabeth Camden
Narrated by: Justine Eyre
Try for £0.00

Romulus White has tried for years to hire illustrator Stella West for his renowned scientific magazine. She is the missing piece he needs to propel his magazine to the forefront of the industry. But Stella abruptly quit the art world and moved to Boston with a single purpose: to solve the mysterious death of her beloved sister.

Romulus, a man with connections to high society and every important power circle in the city, could be her most valuable ally. Sparks fly the instant Stella and Romulus join forces, and Romulus soon realizes the strong-willed and charismatic Stella could disrupt his hard-won independence.

Can they continue to help each other when their efforts draw the wrong kind of attention from the powers-that-be and put all they've worked for at risk?

What listeners say about From This Moment

Love the story. Very well written, great plot, great characters. Did not like the narration at all. The voice was distracting and quirky.

An interesting premised ruined by preachiness

I was intrigued by the premise of Elizabeth Camden’s book “From this Moment” as it takes place in Boston, a place I know well. The book begins with the construction of the first subway system in the US, the Boston T. The first half of the book was very entertaining, I liked the characters and enjoyed the mystery. However, halfway through the book, it began to lag, it also started to get preachy.

I’m not a religious person, though, I do enjoy Proper Romances. I think stories that have a universal moral message such as forgiveness, compassion, redemption, self-betterment, etc. can be quite enriching, however, I’m not looking to be preached to about Christ. It’s just not my thing.

Unlikable characters whose described behavior contradicts the author's descriptions of the characters themselves, The plot and most character's behaviors are silly beyond salvation. And, speaking of salvation, the author keeps veering into most pompous and derogatory preaching at every corner, for the most part, grossly inappropriate for the situations at hand. I welcome characters who have and practice faith when it is shown organically and believably, but this is downright unnatural and disgusting force-feeding of faith to the reader. The preaching has the subtlety of a sledge hammer, while the relationships in the book have no ground to stand on. It's rare that a book disgusts me so thoroughly, but in this case I found no redeeming qualities to this waste of Justine Eyre's narrating talents. And I had such high hopes for it based on the description.

Loved the storyline. Had a balance of suspense, love and mystery. I can only say repetitious thoughts from midway on is the only reason I am giving it an overall 4 stars.

I really enjoyed Elizabeth Camden's writing style in a different book of hers that I listened to. I found the characters in this book, however, to be unlikable. Maybe they deserved each other. I will say the narrator caused the characters to seem even more annoying than they probably would have been had there been someone else reading the story! I began listening to Elizabeth Camden's books because a different reader compared her to one of my favorite authors, Lynn Austin. While she displays a talent for story-telling, there is no trace of the depth of Christian message you see with Lynn Austin! I would call this "clean" reading with an occasional mention of God or prayer. It will not change your walk with Christ.

I loved this book and couldn’t put it down though I tried. To make it last longer.

Good story but it was a little slow moving for me until over halfway. Both of the main characters were too shallow and vain for my taste. I enjoyed the side story of his cousin and her husband more.

Love Justine, but I prefer my preaching in church

the premise was interesting, but the all the bits about faith added zero to the advancement of the story or characters and just served to make an already too long story longer. there's a lot of covert sexism in this that rubbed me the wrong way. The author continuously implies that all women must be motivated by the desire to be a wife and mother and it's grating and offensive. This story went on way too long and honestly I wish books like this came with a warning label because it does feel like a dirty trick when I'm already several chapters invested and then these weird references to Christianity start sneaking in. it sucks because there are a lot of little interesting bits about Boston and this time period that were overshadowed by the irritation of feeling I was being stealthily preached at.

I found this book to be very interesting and enjoyable. The way in which Stell searched for the truth about her sister's death was a bit different. She was stubborn, head-strong and went about things in a bit of a gruff manner. Not typical for a woman of that time period. The romance between Romulus and Stella was a bit different too. He was a confirmed bachelor, made no secret about it, yet he and Stella fell for each other. The villain was very much a surprise! I really liked how the author brought him out into the open.
One of my favorite parts was when Stella faced her biggest fear head on and realized she should be thankful for everything in her life.

The narration at normal speed was slow, very breathy, and almost boring, I sped it up to what I considered normal speaking speed, maybe a little faster, and it was much more enjoyable to listen to.

I have loved many of Elizabeth Camden's books and look forward to reading/listening to more.

I finally gave up trying to listen to this woman’s voice. She whined! I don’t recommend this book!