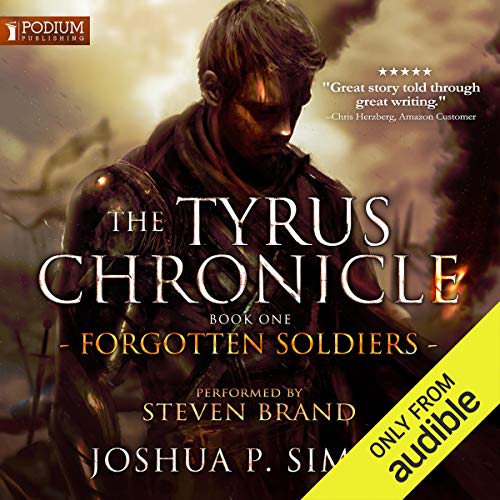 A great war. A changed world. A soldier through it all.

The Turine army is on the brink of victory against the Geneshans. Sergeant Tyrus and his unit are tasked to steal an artifact from the enemy that some believe has the power to destroy the world. Taking such power from the Geneshans would end the decade long war.

Upon their success, Tyrus' unit is among the first wave of soldiers discharged from the army. War has robbed him of time with his wife and children, but now the life he has dreamed of every day for the last 10 years is just a long journey away.

Traveling home, Tyrus finds the world he left behind changed in ways he never expected. His own countrymen view returning soldiers as a threat. His own townsmen want to forget he even existed. Danger is everywhere. His dream is in jeopardy.

What listeners say about Forgotten Soldiers

I’ve always liked Steven brand following the Anthony Ryan books. This book is fantastic. Plenty of action and drama. Some real tear jerker moments too. Was not sure what to expect looking at the reviews, but am so glad I went for this. Top quality writing.

Slow build to what I hope is a great series

Where does Forgotten Soldiers rank among all the audiobooks you’ve listened to so far?

On my list of books I'm impatiently wait for the next in the the series. the character development is slow but done at a pace where that allows you to connect with them

What was one of the most memorable moments of Forgotten Soldiers?

the journey home stuck with me being a former soldier I can identify with the emotions of return home after war.

Enjoyed the book can't wait for the Next in the series

WHAT I ENJOYED:
-This is unique among the other fantasy novels I've read in that it focuses on the story after the percieved war ends and soldiers begin to trek home to their families. Had I read that last sentence before purchasing I might be inclined to stop and move along; however, the story is well worth the journey!
-The worldbuilding is interesting and the magic system curious.
-The human component of the novel is my favorite element. Central themes of family and friendship are well done.
-I'm a fan of Steven Brand and his narration here was strong, as usual. I fell in love with his work on Anthony Ryan's Blood Song series.
-Lastly, the plot pacing was well designed and had a nice balance throughout.

WHAT I DISLIKED
-More detail of the environment, magic systems, etc. would have made the world come alive a bit more.
-Some plot points were predictable and/or cliche but the overall story was not much affected.

Great story with a great narrater!

I would and already have. It has a catchy story, drama and a lot of feelings.

What does Steven Brand bring to the story that you wouldn’t experience if you just read the book?

Hes voice fits very well in the role as an old soldier, an just brings the story to life.

Not even hell can be as bad as this.

Great storytelling at it's best!

If you could sum up Forgotten Soldiers in three words, what would they be?

Characters, characters, and characters. The author does an amazing job at the depth he gives each one. The unfolding of the story creates a deep relationship that has grown between the main character and his fellow soldiers but also his struggle to reconnect with his family.

Tyrus's loyalty and strength shining throughout the story.

Steven Brand is by far one of my all time favorites. I only chose this book based on his excellence in previous performances. His voice IS the ultimate soldier, fighter, antagonist, and leader. Narration is the key to all audible books and as a listener, it needs to grab you from the start. Playing the audio samples is the only way I chose my books (well subject matter too). Anything Steven Brand narrates, I'm in.

The disappointment and death for the soldiers as they tried to reach home.

This was a great first novel to read by Mr. Simon and I look forward to many more!!

I love audiobooks. This book is one of the top the story was excellent the performance was even better and I can't wait for the next one to become available on audibles.

This is a very well written story, from plot and story, to character development, to excellent narration, this is the whole package.

War is hell but afterwards sucks too

First, this is definitely an adult-themed novel what with the constant indifferent references to whores, rapes and beatings thereof. There is also one reference of burying an enemy-side baby alive for expediency sake. Ostensibly, it's a story about soldiers and the inhumanity forced upon men from both sides during battle. However, it's more about a group of soldiers, Tyrus, the primary protagonist, his sister Ava, a sorceress and his squad who have survived the 10 year long Iliad-like battle with the Geneshans. In the aftermath of the war, Tyrus, Hamath, Dekar and Ira were released from their military service and, along with other soldiers were traveling together back to their homes. The trip back was a mixture of travels and travails, as most of their homeland townships wanted little to do with them and more than a few reacted violently to them.

The magical aspects were mostly common place but there was one type of people who had the ability to resist spells cast upon them but also a rather unique ability to also be able to draws spell effects from others who were affected but only by making constant contact with the inflicted person or persons until the spell effects dissipated.

Tyrus was pressed into the service when he was married with 2 children. It wasn't immediately obvious but theirs was a mixed-marriage with him being fair-skinned and her being dark-skinned and her race was mostly referred to as &quot;exotics&quot; and were some of the most preferred whores. I came to see this term as a similar pejorative as Asian people being referred to as &quot;orientals&quot; even though it seemed that the author hadn't meant it that way.

I wasn't able to garner much interest in the characters nor the plot. The reasons for the townsfolk disdain, hatred and violence toward the soldiers on returning home wasn't very well developed and was unrealistic. Then the army's reaction to the violence was way over the top.

I was also disappointed when the novel ended with too many story arc left dangling. The narrator was okay but could have come across with a bit more enthusiasm.

Regrettably, I don't expect to continue with this series.

The story and characters are amazing. We just need more of what is in the beginning more often through the books. Less of what was towards the end. (Avoiding spoilers) it's worth the read. And worth the credit.

This is a good one.

Great story and great narrator. I have a theory about narrators. The better the narrator the better the book. I enjoy Mr Brand, but I understand others may not. I can't wait for the other books in the series.

captivating,gut wrenching, couldn't stop listening. The performance and characters make it easy to stay in engaged with the emotions the story stirs.