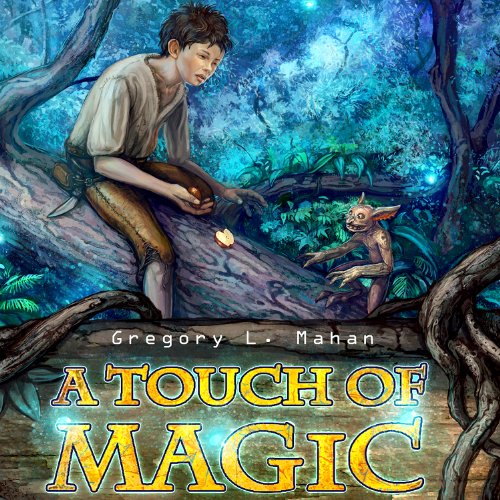 A Touch of Magic

What's a young mage to do in a land where magic is illegal, and the penalty is death?

At the age of 14, Randall Miller is surprised to learn that he has the talent - for magic! Tricked into apprenticeship by a powerful Mage, Randall is forced to leave everything he knows behind. When his mentor is killed by Aiden, head of the secret police, he flees for his life, stumbling from one misadventure into another. Teaming up with a trio of greedy traders and a capricious imp along the way, Randall must learn to master his budding power, or die at the hands of the Rooks!

What listeners say about A Touch of Magic

A Thoroughly Enjoyable YA Fantasy Listen

Frankly, I enjoyed Earl the most. There was so much more to him than just his volatile reactions-- a character whose waters ran deep.

My Thoughts: I thoroughly enjoyed this book. I was remarkably entertained with Randall’s journey into being his own person. Even though it is a YA book, probably for a young person between 13 and 17, the plot and story kept me engrossed in its telling along with its excellent narration. Sometimes life lesson’s need repeating for us oldies. (smiling)

Randall’s journey began just before he turned 14. He was small for his age and had always been ridiculed, not quite as good as the other boys in the village. He wanted to apprentice with the militia so he would be taken seriously and the prestige belonging to men who could reeled their swords and ride horses would only increase his stature and hopefully with one particular girl. But he was apprenticed by a man named Earl who won his family over and paid them handsomely, his wages in advance.

Earl was an interesting individual who had secrets of his own and rode Randall hard. He helped build his character and his body, for Randall was apprenticed to be a caravan guard – as close as he could get to the militia he thought with chagrin. Earl wasn’t who he appeared although his cover for his real talent kept him safe. He was a mage, well-respected among his peers. In the times this story plays out, mages were hunted down. I thought it quite interesting his way of teaching Randall about magic and how to use it.
The people Randall met were not always who they appeared to be, however wary of them, he chose to trust them until they became untrustworthy. Without the lessons of magic he’d had, he would not have survived. He utilized these lessons, saving his life more often than not. He befriends a small sprite along the way and this friendship keeps him sane when he was completely alone.

Randall’s journey is full of lessons, hurt, danger, and yes, even finding the good where many see it not.

David Stifel’s narration was excellent; well told, getting into the very essence of the characters and their personalities. His emotional tone captured perfectly, the cantankerous Earl who had a fiery spirit and short fuse. As Randall moves through his journey, he changes with his learning and we hear the changes in Randall’s character through his inner dialog which David Stiffel so very well narrates.

I never noticed any extraneous noise or shifts out of character during the telling. So no sloppy editing here. The story ended with an ending and yet a new beginning preparing the reader for more of this adventurous fantasy. I would very much enjoy continue reading or listening to more of the series.

What would have made A Touch of Magic better?

What was most disappointing about Gregory L. Mahan’s story?

It was fine and didn't detract from the story.

If you could play editor, what scene or scenes would you have cut from A Touch of Magic?

I wouldn't have had the bursting people. I would have the demon transport him to another place or find out that the demon wasn't a demon at all. Most people don't befriend demons.

If you are looking for fantasy for the younger set it would be better to steer them to Rick Riordan for any Percy Jackson books or his Kane Chronicles; J.K. Rowling for Harry Potter, Brandon Mull for the Fablehaven series or Michael Scott for the Alchemist: The Tales of the Immortal Nicholas Flamel. These are action packed fantasy adventures. For 14 crowd girls or boys Colleen Houck's Tiger's Curse books would be great, but it is a romantic fantasy.... entirely clean though. This one plods. It does have a decent magical system and I thought it was interesting, but it wasn't well-done. Hundreds of other books would be better choices.

From my amazon.com review of the kindle edition:

I really enjoy epic fantasy, and find myself often really appreciating the building up of 'ordinary person destined for great things'. However, this took far too long to get out of that portion.

Randall is trained (lectured) extensively by his mentor, so I found myself thinking that nothing really happened in the first third of the book. It seems like a decent magic system - with common enough elements to be familiar, but blended in a fairly unique way. However, I would have preferred a more engaging approach to introducing the reader to it than pages of lecture.

I also felt there were discrepancies presented at times. For example, Randall at times is angry & confident, but bawling at other times. Maybe this was intentional, as he is an early teen, but it wasn't executed very well; it was too jarring and not believable to me. There are also other little things, like his hometown being so small it's basically not even a dot on the map. But, later, Randall remembers homeless children in the streets. Seems disconnected to me.

I quickly realized that whatever Randall was thinking, he was going to be wrong. It was so obvious as to be annoying and I felt he was just a little dim-witted.

I found the dialogue to be unnatural and odd at times (though now I can't really remember any details to give). It just didn't flow well. I'm not sure if that is related to the narrator (since I actually ended up listening to this from audible.com after I picked up the kindle edition).

The second book in the series pretty steep for me: $4 for less than 200 pages. In addition, it was released 14 months after I picked up this book (though the publication date of this title is now the same as the next, somehow). That's a little slow for me, considering how short the books are (I expect that much delay with 800+ page sequels).

In all, it has potential, but I'll be pursuing other reading entertainment.