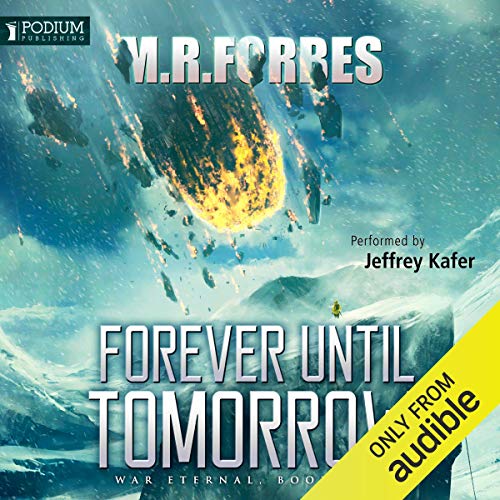 Major Katherine "Peregrine" Asher of the United Earth Alliance has never heard of the Tetron. As the pilot in charge of guiding Earth's first interstellar starship into space, she has enough to think about already.

But when a standard meet-and-greet with the global elite goes sideways, Katherine finds herself front and center in a war she has never heard of and doesn't understand. A war where the enemy can be anyone, and her only hope of survival rests on finding a soldier who doesn't exist.

What listeners say about Forever Until Tomorrow

Much slower than I expected

As an avid MR Forbes and Jeffrey Kafer fans, I have to admit this was a little slow. The other books in this series were really good. The swapping of timelines, and the mix of tech, AI development, treachery and more, so intricate that it kept me on edge, but the start of this book just wasn't working for me. It felt confusing, and just too long.

The latter half of the book of course picked back up the pace, things started to come together, and we could see the where and why we went about everything as we did.

Jeffery Kafer really helped with this, his wonderful narration always does the job, I just wished that finally getting back into this series, the book on the whole was a lot better.

A little let down, but I wanted more. So went onto the next in the series... which was much better. :) Still thank you very much to the guys for the entertainment and onwards.

Just when you thought you had it straightend out...it all goes convoluted again, poor mitch..

Another Smasher in the Series

feels like forever since I started this series and the characters trials are forever awesome.

this series has gotten pathetic. Nothing happens and the story does not progress. Humans are dumb and pathetic and they created an Ai race that wants to destory all humans. Oh this was stated in the second book? yeah well that is what is going on. and this is book 4 or 5 now? hard to keep track when it is the same exact story and sequence and pretty much the same characters, just some of them have different names. dont bother with this book. if you want to see where the story goes, probably he will finish in about 3 or 4 more useless novels.

good performance on a bad book

this is the worst book in the series. the first 1/3 of the book nothing happens. then it OK after that but still slow and boring compared to the previous entries to the series. if I knew it would be this bad I wouldn't have bought it.

just seemed to be nothing but a entire book on backstory.

looking forward to the next book and hope it is better.

Meh. Don't bother with this one

Boring and pointless. Just skip this book. It does not seem integral to the overall story...

The eternal war continues with a return to it's beginning...at least to the beginning of this recursion.

MR Forbes is by far one of my favorite authors. I do suggest with this series to read the books in order because there is a lot of time bending that our characters can get confusing without having recent time changes stick in your mind!!!

if you got this far might as well jump in.

narrator was great in the others but not in this one. he probably new the ending. which was like someone coming into the room and saying hey guys wrap this up I got a dentist appointment to get to. But truthfully I really liked this book up to halfway through chapter 51. i probably will not be reading any more from this author after this

Series is jumping the shark

This latest installment reeks of the previous storyline and does not smell good. The plot is overly complicated and hard to follow, which is exactly what the last book happened to be.

No qualms about the narration as it is as good as can be expected.

This story is so good. Best line "Mom dad, stop flirting" can't wait to hear how it ends.

A bit haphazard but still a fun book

Well, once the riggers were defeated Forbes stopped with the annoying "Rig-GERS!" appellation and in now settled on the marine, "uuh-RAH". While I preferred this over the previous one, the narrator sort of, matter-of-factly, utters it without any enthusiasm, coming off as "why bother?" moments.

As with the previous novels, this one sets us into a new timeline back sometime in the past. The only characters that made it back are Mitchell and the Kathrine and Watson and other tektrons. There are a lot of head scratching in the beginning since much of what transpires in the beginning doesn't make much sense until much further on in the book and some of it isn't revealed until the very end.

What's not clear is whether this is the last book in the series or not. I'll not indicate why since in doing so I would reveal not only a few spoilers but also ruin the ending for anyone wanting the read/listen to the novel. I'll just say this, I hope this isn't the end of the story.