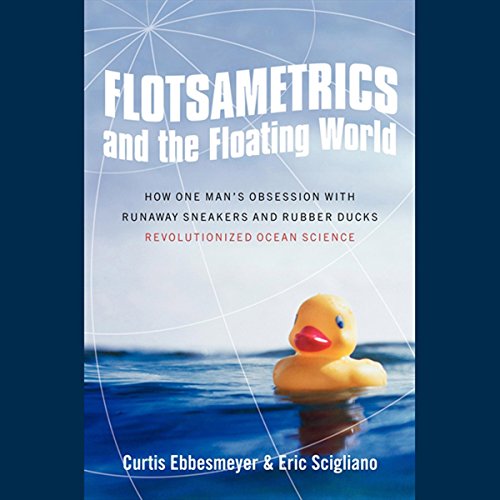 Flotsametrics and the Floating World

Flotsametrics and the Floating World

Pioneering oceanographer Curtis Ebbesmeyer unravels the mystery of marine currents, uncovers the astonishing story of flotsam, and changes the world's view of trash, the ocean, and our global environment.

Curtis Ebbesmeyer is no ordinary scientist. He's been a consulting oceanographer for multinational firms and a lead scientist on international research expeditions, but he's never held a conventional academic appointment. He seized the world's imagination as no other scientist could when he and his worldwide network of beachcomber volunteers traced the ocean's currents using thousands of sneakers and plastic bath toys spilled from storm-tossed freighters.

Now, for the first time, Ebbesmeyer tells the story of his lifelong struggle to solve the sea's mysteries while sharing his most surprising discoveries. He recounts how flotsam has changed the course of history - leading Viking mariners to safe harbors, Columbus to the New World, and Japan to open up to the West - and how it may even have made the origin of life possible. He chases icebergs and floating islands; investigates ocean mysteries from ghost ships to a spate of washed-up severed feet on Canadian beaches; and explores the enormous floating "garbage patches" and waste-heaped "junk beaches" that collect the flotsam and jetsam of industrial society.

Finally, Ebbesmeyer reveals the rhythmic and harmonic order in the vast oceanic currents called gyres - "the heartbeat of the world " - and the threats that global warming and disintegrating plastic waste pose to the seas...and to us.

"Light and lively...Shoes, messages in bottles, and floating rubber ducks have kept Ebbesmeyer's eye on the big picture. Besides, as readers will readily agree, they've been a lot of fun to study." (Natural History magazine)
"With a whimsical mood overlaying serious science, Ebbesmeyer's work will appeal to the environmentally minded." (Booklist)

If you're a fan of the coast and beach combing this book is worth a listen.

Interesting flotsam on the waves

This books is rather like his subject matter - full of fascinating tidbits floating on a undulating sea of interesting and less interesting backstory, autobiography, self-promotion and gentle rant. It would be better if it had slimmed down on the autobiography (particularly in the opening chapters) and increased some of the background hard science, with more reference to, and explanation of, the work of other oceanographers. The stories of following the flotsam, such as the sneakers and tub toys were fascinating, and the talk of beach comber fairs made me want to get out there and beachcomb, but I felt that the overall there was a much better book inside here somewhere.

Painful to listen to

Between the author adding a bunch of unnecessary information, and the narrator's robotic voice, as much as I tried I couldn't get more than three chapters into this book before I decided cut my losses and stop listening.

What made the experience of listening to Flotsametrics and the Floating World the most enjoyable?

This book presents Ebbesmeyer's research on the ocean with great humor, making it enjoyable to get this piece of science education. I plan to listen to the book again.

What was one of the most memorable moments of Flotsametrics and the Floating World?

What about Eric Michael Summerer’s performance did you like?

Summerer's performance was "invisible", i.e., we weren't conscious of the narration as we listened during a two-day drive. No distracting or annoying quirks. So his presentation was great for this type of book.

Yes. Fascinating and entertaining, while addressing profoundly worrisome issues such as the great garbage patches in the ocean.