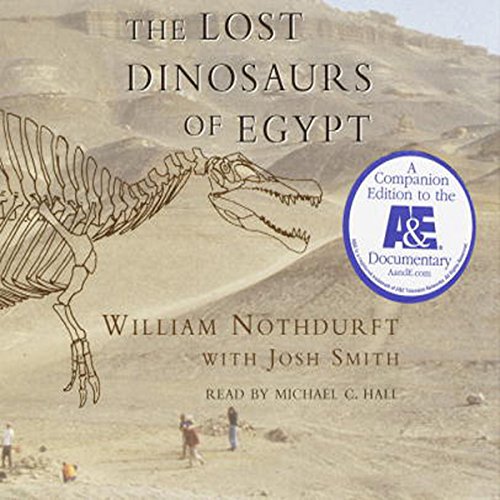 The Lost Dinosaurs of Egypt

The date is January 11, 1911. A young German paleontologist, accompanied only by a guide, a cook, and four camels, reaches the vast Bahariya Depression after a long trek across the western desert of Egypt. Ernst Freiherr Stromer von Reichenbach hopes to find fossil evidence of early mammals. At the bottom of the Bahariya Depression, Stromer will find the remains of four entirely new dinosaurs, along with dozens of other unique specimens. But there will be reversals - shipments delayed for years, fossils shattered, stunning setbacks. Then, in a single cataclysmic night, all of his work will be destroyed, and Ernst Stromer will slip into history and be forgotten.

The date is January 11, 2000 - 89 years to the day after Stromer descended into Bahariya. Another young paleontologist, American graduate student Josh Smith, has brought a team of fellow scientists to Egypt to find Stromer's dinosaur graveyard. After weeks of digging, they fail utterly. Then, just when they are about to declare defeat, Smith's team discovers a dinosaur of such staggering immensity that it will stun the world of paleontology and make headlines around the globe.

Masterfully weaving together history, science, and human drama, The Lost Dinosaurs of Egypt is the gripping account of not one but two of the 20th century's great expeditions of discovery.

What listeners say about The Lost Dinosaurs of Egypt

I really enjoyed this book. It's great how the two story lines are interwoven the science is brought to live. I learned much more about paleontology that I expected and found it fascinating.

Not as exciting as I'd hoped

I am interested in dinosaurs, in Egypt, and have actually been to Bahariya. I also think Michael C Hall is a good actor, and I chose this partly for his narration.
For whatever reason, this book never took off for me. I found the writing plodding and the narration didn't breathe any life into it for me. I sincerely hope this is just me and that other listeners will enjoy it more.

I thoroughly enjoyed listening to The Lost Dinosaurs of Egypt. The authors interwove the stories of two excavations in the Egyptian desert into a very interesting mystery. It?s rare to be entertained while learning a great deal about archeology, paleontology, geology, and history at the same time. Plus the narrator is terrific.

This paleontological adventure-mystery crafts a story in a fashion similar to "The Lost City of Z" and "Into Africa," weaving between modern day research in Egypt and the history of a 20th century German scientist who pioneered research in the same area.
A couple reviews say it is slow. Perhaps it starts slowly, but the beginning provides context for the field of research. But the beginning sets up the rest of the tale, and the story soon moves along well. Also, the narrator's voice is well suited to tell it.

A riveting look at science and history.

What was one of the most memorable moments of The Lost Dinosaurs of Egypt?

Listening to the description of Earth's history was amazing. As a geologist, I know all the information but I have never heard it told like a science fiction story. It shows how phenomenally interesting natural history is.

I enjoyed when the book described how statistically difficult it is for a fossil to form and be found in-tact enough that it can also be studied. I think people can take fossils for granted, and this book really showed how significant it is when you can look at a skeleton in a museum.

This was a book I looked forward to listening to but was also ok with putting down when needed.

Overall, this book tells an interesting and unique story. It shows how science and history can interact and how fascinating both can be. In addition, Michael C. Hall brings the story to life with intense, but subtle drama.

Both my 4 year old son & I enjoyed this book!

I found this book to be entertaining, enlightening and a joy to listen to. The narrator is well matched to the subject. I heartily recommend this book to any one interested in paleontology, dinosaurs, archaeology, geology, historical environments, the European science community of the early 1900's, Egypt and/or the history of those subjects.

My 4 year old son and I were listening to this book on a long drive to meet up with my folks. We met half way & were in the process of transferring my son to his grandparents when I offered the CD's/book to my parents. They refused saying they were listening to the Adams book. My son over heard this exchange and threw a *fit* saying he wanted to listen to the rest of the dinosaur book.

Once accustomed to the minor recording quality, this audiobook is stuffed with related history, geology, and paleontology information. This is a great and dense work, presenting thorough research of the subject matter.
Michael C. Hall reads engaged and showcases (probably unknowingly) some of his hallmark intonation. An awesome listen!

If you like paleontology, geology, paleobotany, or dinosaurs; or if you simply enjoy hearing about exploration and discovery, you will like this book.

Everyone who loves Dinosaurs

Everyone who loves Dinosaurs and Paleontology will love this story.
They will particularly enjoy the background history and detective work that goes along with the dig and discovery of these fossils in Egypt

Terribly informative and boring. The author picked an excellent event in history but fails to put adventure or any kind of excitement in it.

WARNING: This Program May Cause Drowsiness

It's not that the story isn't interesting, or even that it's not well told--for the most part it is. The problem is that the narrator's voice is a bit on the monotonous side. I suspect I would have enjoyed this title much more if I had read the print version.

I will say this though: after persevering through the first couple of hours I noticed that the story was beginning to grab me despite the unfortunate deficiencies of the narration.

If your circumstances permit, I recommend you check the print version out from the library and read it. If not, it's probably still worth listening to, but make sure you aren't operating heavy machinery when you do.

If like me, you often suffer from insomnia, this is just the thing! A very entertaining way to put yourself to sleep.

This is by far one of the most boring books I have ever listened to. I have tried to listen to "Lost Dinosaurs" two times and both times I have had to fast forward or just end the audio. I enjoy books on discovery, especially on Dinosaurs but my god, the book just drags, and the narrator, no life and monotone. It is to the point of irritating.