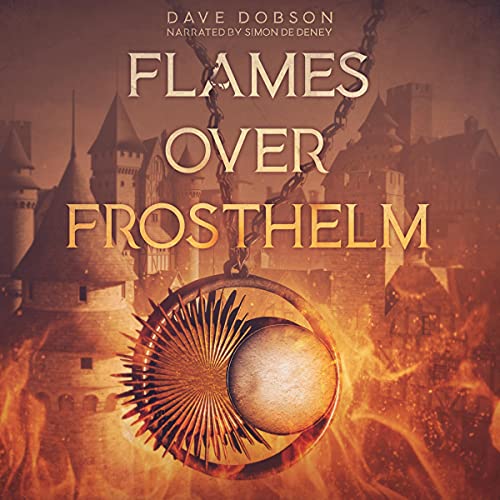 By: Dave Dobson
Narrated by: Simon de Deney
Try for £0.00

Sometimes, your case takes a left turn. Or three or four. Marten Mingenstern and Boog Eggstrom are provisional inspectors, fresh out of Inquisitor’s Guild training and eager to prove themselves. Assigned the mundane task of tracking down stolen jewels, they instead uncover a mysterious cult set on destroying the city. After a thief explodes, they earn the enmity of a vicious noble, the Chief Inquisitor gets bought off and goes rogue, they are seized by barbarians, and they are sentenced to death at least a couple of times. In a final, frantic race with prophecy, they face ruthless fanatics, a city turned against them, and terrible forces long buried.

Flames over Frosthelm is the first novel about the Inquisitor's Guild, the investigative arm of the government of Frosthelm, a medieval city-state where criminals thrive, nobles scheme, and dark secrets lurk. Expect intrigue, mystery, swordplay, adventure, politics, romance, and the strong bonds of friendship. And a little magic along the way. Described as Princess Bride meets CSI, this new novel is a tale of classic adventure with a healthy dose of humor.

Flames over Frosthelm is a full stand-alone novel. Beginning, middle, and end, and no waiting for sequels to find out how the adventure ends (hear that, George R.R.?). There is swordplay, violence, death, and some romance, but the audiobook does not include anything terribly hardcore. Think PG13 or Harry Potter and you're probably in the right place.

What listeners say about Flames over Frosthelm

I was given this free review copy audiobook at my request and have voluntarily left this review.
This was a little confusing at first but once I caught on with who was who, I finished book super fast! I was so enthralled with the story, and subtle romance, and interesting magical aspects. This was a really great fantasy book I enjoyed every minute of it.

When Marten and his apprentice run into sorcery while investing a jewelry theft they get thrust into an adventure they weren’t looking for. Soon they’re hot on the heels of a cult and always at death’s door. Can they put a stop to evil in time to save everyone they hold dear?
This is a wonderful epic fantasy, filled with intrigue, danger, humor, and mystery.
The narrating style was true to genre and flowed freely. If you like fantasy, you’ll love this!

STORYLINE IS WELL WRITTEN AND EASY TO FOLLOW WHILE BEING HUMOROUS AND ENTERTAINING. FOLLOWS MURDERS, CULTIST, EVIDENCE OF DARK BLOOD RITUALS .
HAS GOOD HUMOR, ADVENTURE, INTRIGUE AND SUSPENSEFUL FEEL.
ACCEPTABLE FOR TEENS AND OLDER AGES.
NARRATOR IS GOOD AND EASY TO FOLLOW.