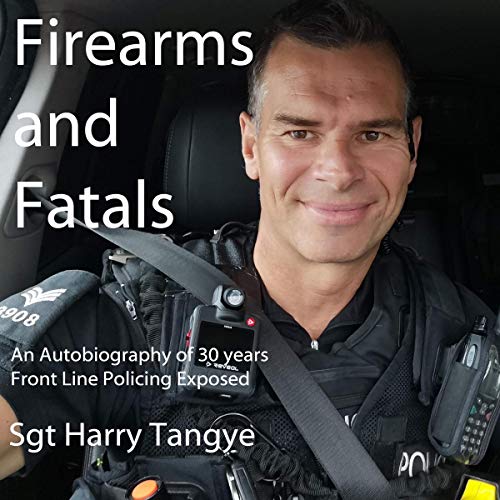 When regaling numerous hilariously funny, some beautifully sad and some utterly tragic accounts from events over 30 years of policing experience, many a friend and colleague of Sergeant Harry Tangye has said, "You just have to write a book!", and so he did.

The author has worked as a frontline police officer in the Devon and Cornwall police with the Armed Response Unit and traffic department for 23 of those 30 years with the others spent on the beat in areas such as Torbay, Exeter, and Plymouth. He was an operational firearms commander, a firearms tactics advisor, a VIP protection officer, and pursuit tactics advisor along with investigating many a fatal road traffic collision being regarded as an expert in his field on many aspects. Allow yourself to be taken along with him on a journey from adventure to adventure, covering all emotions possible, covering how policing was done in the past, to how it is done today.

Harry has tens of thousands of followers on his award-winning police Twitter account, which has allowed him to become an influential voice within policing and politics and is often described as "controversial" by media outlets. He is straight-talking, to the mark, and cannot abide policy for policy sake but prefers the individual and personal aspect on everyday life. "Treat every person you meet as if they were your own mother," he says, "and then you won't go too far wrong."

What listeners say about Firearms and Fatals

I have really tried to enjoy this audio book - I love to listen about the careers of others; doctors, those who work in prisons, paramedics, ect. I thought this would have been a good listen too.
Some of the stories are, of course, incredibly interesting and I have great admiration for him being able to serve in the police for a number of years.
However, I find his attitude as quite self important, bordering on arrogant. It is absolutely not politically correct. The author very much gives the impression that he has put all members of the public into certain boxes and already knows all about them, not showing a huge amount of empathy. Further to this, it doesn't flow very well either.
I think I am bowing out with 4 hours left.

Disappointed with this book

I found while listening to this book getting annoyed at Harry’s soap box style views on a lot of situations
I only managed to listen to half as I just got bored with the self opinionated story line.

lots of repeated lines ruined the book for me. the story itself was interesting but nothing ground breaking and it's fair to say that if Harry Tangye was a chocolate bar he'd eat himself. wildly self indulgent and poorly edited

Gripping Incite From Start to Finish….

Firearms & Fatals will have you on the edge of your seat!

This is a great book, I loved it. It was read very well by the author. This gives you a true insite into policing and just how difficult it is today. They books ideas mirror the thoughts of myself the everyday public as iv asked other readers. Harry the auther should be in charge of Britans police force as far as I'm concerned. His ideas and experance really do make sense. I was always taught that honest people have nothing to worrie about and this book upheld this idea to me. I thank Harry and all his colleagues and the police force for all they do and have done over the years. Let's hope one day policing changes to surport the officers and the honest people of this country. I would love to read more from this author. Thanks

Lots of repeated lines spoiling it for me

I was lured in by the title and just wanted to hear war stories if I'm honest. He should have called it 'Houses, Cars, Firearms and Fatals' as there was a lot of that as well! I am disappointed at the amount of personal stuff I'm having to wade through although I expect the fanboys and fangirls love that aspect.

There are a huge number of repeated sentences throughout which I find distracting His pronunciation of certain words is annoying too. FRARMS instead of Firearms is the most annoying.But there's MAL for male too.

He was obviously an excellent officer with loads of charisma but I expected a different book and the narration faults are poor and should have been picked up before the audio was released.

Loved this book from a man that has given his service to us for 30 years, I really liked that he talked about his childhood and how this drove him to do this career in the first place. The policing years where really interesting and I liked the honesty about about how it really in on the thin blue line. Great book for anyone that's interested in the subject.

this book is amazing and I hope you write another. Thank you for giving me a look into the work you did. and thank you for your service Harry.

Harry gives an amazing insight into a busy career! It’s a quick trip through his life and progression within the police. The only negative is that it’s a little short than I would like. I hear he’s writing some more soon!

what else can I say. an amazing book from an amazing officer. hope i can be as good as him in my career