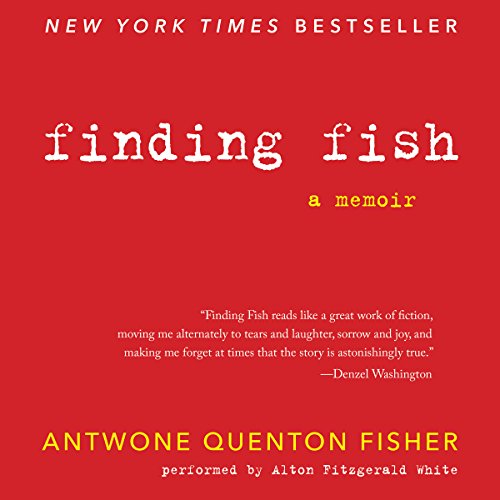 Antwone Quenton Fisher was raised in institutions from the moment his single mother gave birth to him in prison. As a foster child, he suffered more than a dozen years of emotional abandonment and physical abuse, until he escaped and forged a life on the streets. And just as his life was about to hit rock bottom, Antwone enlisted in the U.S. Navy, a decision that would ultimately save him. There, he became a man and discovered a loving family he never had. Through it all, Antwone refused to allow his spirit to be broken and never gave up his dreams of a better day.

A miraculous true story of one courageous man's journey from abandonment and abuse to extraordinary success, here is a modern-day, African-American Oliver Twist you will never forget.

this was an moving account of his life and the difficult childhood. pleased to hear his adult life and his success.

If you could sum up Finding Fish in three words, what would they be?

Finding Fish is a great and captivating read. I have enjoyed reading it with many of my students

I disliked that this version of the recording cut out parts of the text. In purchasing this version to be able to use in my reading-based class, I was hoping that the whole book would be included in the recording. Much to my surprise, pages upon pages were cut out and skipped, making this almost useless in my classroom.

An inspiring look into a life that is at once both tragic and triumphant. Thanks for inviting me in Antwone

I cringed and cried a bit through this book and felt the sad moments like a punch. It was such a beautiful journey through the author’s childhood so purely written I couldn’t be sure I wasn’t there myself.

God bless Anyone Fisher... what an amazing story of resilience, determination and love to never give up!

A hard book to read (listen), but inspiring.

This book was a hard read, only because of the context of the book. The story was good and was inspiring. The narrater did a good job at making the story come alive. The only negative thing I found in the quality was the sound, it almost sounded like a tin can but it was not that bad. The story was good but I wanted to hear more at the end, I guess you could say that it was so good that I didn't want it to end; but it did seem to end too soon.