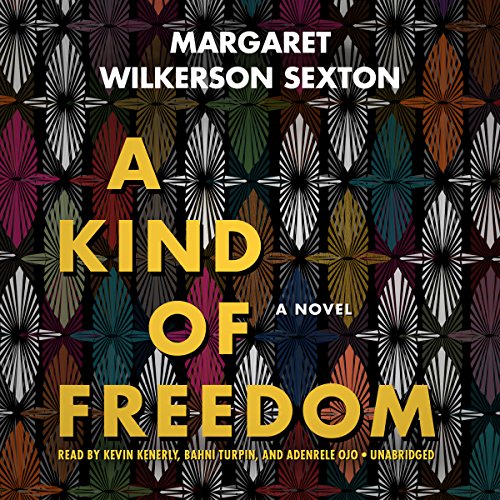 A Kind of Freedom

A Kind of Freedom

Evelyn is a Creole woman who comes of age in New Orleans at the height of World War II. Her family inhabits the upper echelon of black society, and when she falls for no-name Renard, she is forced to choose between her life of privilege and the man she loves.

In 1982, Evelyn's daughter Jackie is a frazzled single mother grappling with her absent husband's drug addiction. Just as she comes to terms with his abandoning the family, he returns, ready to resume their old life. Jackie must decide if the promise of her husband is worth the near certainty that he will leave again.

Jackie's son T. C. loves the creative process of growing marijuana more than the weed itself. He finds something hypnotic about training the seedlings, testing the levels, trimming the leaves, and drying the buds. He was a square before Hurricane Katrina, but the New Orleans he knew didn't survive the storm, and in its wake he was changed too. Now, fresh out of a four-month stint for possession with the intent to distribute, he decides to start over - until an old friend convinces him to stake his new beginning on one last deal.

For Evelyn, Jim Crow is an ongoing reality, and in its wake, new threats spring up to haunt her descendants. A Kind of Freedom is an urgent novel that explores the legacy of racial disparity in the South through a poignant and redemptive family history.

Storyline was great, just left me hanging and feeling short changed though. You know how when a book ends setting you up for a sequel? Well it was not that type of ending at all. It just left me saying, what the heck?

What a beautifully written, engrossing book!

Loved this book; one of the best I've read all year! And I was delighted to learn that it was written by a young alumna of Dartmouth College, where my husband coaches. I couldn't stop listening to this compelling story of three generations of a New Orleans family. It was terrific from start to finish, and is absolutely deserving of the National Book Award nomination it received. Kudos to the narrators, who also did a fantastic job.

Made me miss my home and how I'd grown up.

This book made me miss the home I've been separated from for 13 years. If you love NOLA, you will love this book.

But it ended too quick. I have a lot of questions! Dang it! Good read tho

The story itself is important but it lacks anything new or exciting. You can pretty much guess the entire thing. If you are well-accustomed to “black stories,” you may as well skip this one.

Freedom is a lived experience

Fantastic Debut!! I love this family, their struggles and their triumphs.
Great narrations.
I look forward to more from Ms Sexton

I was very intrigued by the story plot and who it went in and out of different eras. However the ending left much to be desired. It felt like the story wasn’t completely finished. Like a cliff hanger.

I had to go to the book to try to understand how the characters were connected. The dates were helpful but I wished to know before near the end of the book who Alisha was and that Jackie was Evelyn’s child. And what happened to Ruby? Listening to this novel was frustrating. Perhaps it is a better read than audio .

A Kind of Freedom from what? A great story that fell into nowhere

I am so disappointed in this book. The characters were rich, the narration superb (I love Bahni Turpin) and the story had so much going for it. Until it didn’t. The ending was so abrupt that I was actually in disbelief to hear that I had reached the conclusion. I have so many unanswered questions that I thought would surely be answered and the story woven together eventually. What a waste of time. I feel so unfulfilled.

I read “Their Eyes Were Watching God” immediately before “A Kind of Freedom” and here, the language is less poetic, characters less developed, depth of feeling not there. I am not a fan of POV hopping. I prefer to get inside one character, which is not this novel; I felt confused and frustrated as the story hopped generations and personalities.

Still, there is much to like about this story: family relationships; dating angst; competition among siblings all contribute to a thoughtful tale worth being told.