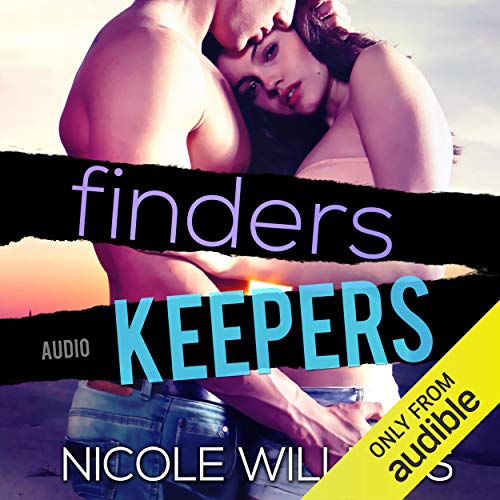 By: Nicole Williams
Narrated by: Zachary Webber
Try for £0.00

His life has been a constant carousel of tragedy and disappointment, including his love life. Of course, applying the term "love" to Garth's conquests is a gross misuse of the word. Some people were made to give and accept love, and others weren't. Garth Black redefines the "others" category. He's made a vow that the day he meets a woman who could sucker him into falling in love will be the day he runs away.

What listeners say about Finders Keepers

Enhanced by the amazing voice

If you could sum up Finders Keepers in three words, what would they be?

What was one of the most memorable moments of Finders Keepers?

The terrible beating Garth sustains in the middle of the book.

Have you listened to any of Zachary Webber’s other performances? How does this one compare?

My first of Zachery Webber's, want to find more. Best narrator so far in all my audible listens.

A really sweet listen from a lovely series. I could detect the goodness hidden inside Garth in Lost and Found. Thankfully he's still enough of a bad boy in this book to stay true to character.

I've had this book in my wish list for months and finally purchased it, so glad I did and wished I had sooner, but it's all about timing. Above and beyond my expectations! Purchased it mainly because of the narrator, Zachary Webber, who is absolutely flawless! Zachary's smooth, amazing voice and his exceptional acting through his words, bring the books he reads to life, like an IMAX theatre in my head!! In addition, I got a great story line, characters I want to know and a love story so well written it will take me a while to float back to earth! Felt all the emotions and more! Don't wait! Credit worthy!! Enjoy!

Oh. my. gosh. I listened to the audiobook of this book and I think I may have a crush on the narrator. He has the most perfect voice for the male POV in a romance novel. His voice is sexy in that bad boy way. He fit Garth's attitude and personality PERFECTLY. He just WAS Garth.
Not only was this book hot as hell, and my heart clenched all over the place while listening to this book, but the audio version kept my attention the entire time. I sometimes have a hard time with the focus aspect of books when I listen to audiobooks if the narration isn't right. This narration couldn't have been any better.
I have read the first two books (actually I listened to the audio for book 1, and read book 2)and I really didn't think that I could get over my distaste for Garth after he was such a jackass in the first ones. But, not only did he redeem himself when I was able to get into his sexy and dirty mind, but I think he may be my new favorite character in this series. And that is saying something since Jesse Walker is the perfect gentleman and I swooned so hard for him.
I love that Garth let us in to his dark and sad mind to see his serious love he had had for Josie since he was just a little boy, and how tortured he was in his life. Tortured both by Josie as well as from his drunk of a dad.
I spent more than half of the book with that feeling you get, you know that heart clench and stomach turning because you are hearing the feelings of a guy who is falling in love. And the tortured feeling he gets over it. I just loved it all. This book and those feelings are the reason I read love stories. I don't think I could get a more perfect book for that. Everyone must read this book. Hurry, go read it now.

Thank you for making Garth Black human! It was a great story and heartfelt addition to Jesse's story! I loved the performance and was bought to tears many times!

I started this book at work and drove home to finish it.. I love Zachary voice 😍

Prepare to have your heart strings pulled in all the right directions. One of my favorites stories to date. top notch narration that brings the story and characters to life. A must listen.

Enough into it to finish the series

In my "Near and Far" review I mentioned that I wasn't into the series enough to read "Garth's" books. I had already purchased it on audible and on a long drive thought what the hell. It surprised me how sucked in I got to this book. It was helpful in understanding both Garth and Josie to hear about their past and what made them who they are today. It was also nice hearing bits and pieces on how Jesse and Rowen were doing, they too seem to be coming into their own as a couple. I like both the main characters and wanted to hit Colt Mason myself a time or two in his arrogance. He's going to have an awful long fall off his metaphorical horse. I thought the narration was lacking. It's unfortunate because a bad narration truly can ruin a fantastic book. He paused for far too long in curious spots in the book, mid sentence for example. And it was so long often I had to check my phone to make sure it was still playing. You could hear a lot of background noise like shifting and movements, I'm also pretty certain at times you could hear him take a drink. On that note, the next two books aren't on audible so I ordered them on Amazon. I'm excited to read them at my own pace and create my own voices and emotions. Although I read a TON of reviews and it's predictable what will happen in the next two books I'm very excited to see where everyone ends up! I would recommend this series and read it again myself! :)