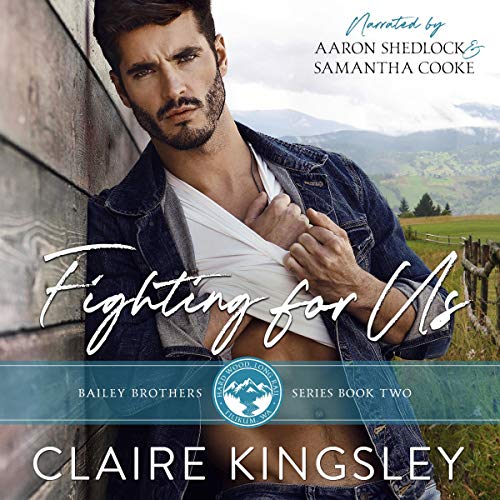 By: Claire Kingsley
Narrated by: Aaron Shedlock,Samantha Cooke
Try for £0.00

How long would you wait for the love of your life?

The Asher Bailey who comes home to his quirky small town isn’t the same man who put a ring on Grace’s finger. He’s bigger, harder, haunted. Forced to give up Grace and everything else that was good in his life for a prison sentence he barely survived.

Now that he’s home, he finds himself aggressively welcomed by his brothers and gleefully gossiped about by his neighbors. He’d counted on both.

But he never expected to see Grace still wearing his ring.

Grace’s fairy tale didn’t end. It was interrupted. She’s spent the last seven years living her life while waiting for one man. Now that he’s back, she’s got her work cut out for her. He’s scarred and angry, and stubbornly convinced they can’t be together. She’s more than happy to educate him otherwise.

Every beer, every prank, every kiss brings him closer to where he’s always belonged. In her life. In her arms. In her heart.

Asher fears the darkness inside him can’t be contained. But Grace won’t give up on him without a fight.

Author’s note: A brooding, wounded hero and the woman who won’t give up on him. A pack of unruly, prank-loving brothers. A wild neighborhood rumor mill. Spectacular BFF banter. This is a love story about soulmates that delivers the heat and all the feels. The Bailey Brothers series is meant to be heard in order and Fighting for Us concludes Grace and Asher’s happily ever after.

What listeners say about Fighting for Us

5*
We return to the story of Asher & Grace from protecting us.
Grace is upset to find Asher has been released without anyone letting her know. Asher refused contact with everyone in order to cope so has had no idea what's been going on while he's been away.
I've waited patiently for the conclusion of Asher and Grace's story and as usual Claire didn't disappoint, the story had all the feels, the frustration, the laughs, the hot scenes and the tears.
Brilliant loved it

Strong men and the women who love them

This series has all that and more!

A spin-off of the wildly addictive Miles Family series, the Bailey Brothers series does not disappoint. The beginning of the series, Protecting You and Fighting for Us, is a two-part introducing to the Baileys, their unique hometown, the generations-long feud with another family, squirrels on secret missions, a hidden treasure, and the story of Asher Bailey and Grace Miles whose love endured through years of hardships.

The narrators for the first two books of the Bailey Brothers series were absolute perfection in their roles. Aaron Shedlock voiced a completely believable 11-year-old Asher's take on his relationship with Grace, a 21-year-old Asher realizing he's in love with Grace, and an almost 30-year-old Asher facing a different life than he imagined. Samantha Cooke was amazing in voicing the pivotal scene of the first book - the confusion and fear experienced by Grace in this scene were palpable. And, in the second book, voiced a more mature Grace with determination, hope, and anger.

I highly recommend this series!

What an emotional conclusion to Grace and Asher's story. There are lots of highs and lows in this one that will have readers feeling all the feels. I liked that the conflict was more internal for this couple, as they tried to confront and overcome their personal demons. I felt that the story unfolded in a realistic way and appreciated that there wasn't some magic bullet that righted all the wrongs. Our characters struggle and stumble, but that only made me root for them harder. Plus, the chemistry between Grace and Asher is scorching hot and some of their scenes will leave you a little breathless.

I will say that my favorite character of the book though is probably Cara. Any time she was on the page she completely stole the show. Cara brought some wonderful comic relief to the story and I loved all the sparks between her and Logan. I'm hoping to see things progress between them as the series goes on. The narration by Aaron Shedlock and Samantha Cooke was outstanding again and they were the perfect Asher and Grace. Fighting for Us sets up future books very well and I'm looking forward to getting to know each of the Bailey Brothers better. The epilogue has me dying to start broody and grumpy Evan's book right away!

Note: Fighting for Us is not a standalone and should only be read after enjoying Protecting You first.

“Sometimes when a man goes to war, he has to make himself forget the people he leaves behind. It’s the only way he can become the warrior he needs to be to survive.” - Gram

Fighting for Us is the story of Grace Miles and Asher Bailey. It starts as Asher is unexpectedly granted clemency and released from prison one year sooner than expected.
Coming back home to stay with his Grandmother, Asher struggles with the transition and the fact he did not have time to mentally prepare for his release. He has a lot of pent up anger and many anxieties as he reintegrates back to life outside of the confinement.
Grace has been relentlessly working on remodeling hers and Asher’s “dream” house and awaiting his return back home. What she did not expect, was the rejection she received when they first see each other again. Asher is no longer the man he was when he first proposed to Grace and he did not expect her still wearing his ring.
Throughout this masterfully told tale of adjustments and second chances we get introduced to all Bailey brothers and Grace’s feisty best friend Cara; and we catch up with our favorite characters from the beloved Miles family series.
The narration of this audiobook enhances the story and allows us to connect with all the characters on a very personal level.
We have been anxiously waiting for Asher’s and Grace’s story for some time, and Claire Kingsley did not disappoint! She has a gift of extraordinary story telling and paints a vivid picture of the characters that has you feeling the feelings alongside with the protagonists.
Fighting for Us has it all - love, heartbreak, humor, steam and swoon and the story is EVERYTHING!!!!

Same story as Release by Aly Martinez. Lacks originality, character development. Story not cohesive. Also, author states this is to be read after Book 1; however, audible does not carry book 1. What's up with that? Aaron Shedlock did a good job narrating. UPDATE: I see that Audible posted Book 1 the following day. If you're going to risk this read, probably should start there. I'll pass.

I love the push and pull between Grace and Asher!

I first read Fighting For Us when it was released back in May, and it was even better the second time around, on audio!

Technically, Fighting For Us is a standalone, but it's so much better to read with the context of Grace and Asher's origin story in Protecting You. Plus, you get to meet the wild Bailey brothers in Book #1, so there's that. Trust me, you want to know these guys!

After seven years in prison, Asher is released from jail -- and doesn't know what to do with himself or his life. He's had zero contact with his family -- not even Grace. It broke his soul, but it was the only way he was able to survive being locked up. And Grace never gave up on their love, even when people thought she was insane for staying faithful to Asher.

Seven years ago, they had a fight... or was it a break-up?

I loved how even though these two came back together, but he was still holding back. Asher was so afraid that his demons (as a result of being in prison) would destroy Grace even worse than when he turned his back on her all those years ago. But her love for him is just so big, her faith in them as a couple is just so strong, it brings Asher through his darkest hour. And dirty-talker Asher is so freaking hot!

Another great aspect of this book was how Claire Kingsley shows how Asher's prison sentence affected his whole family. It wasn't just Asher who had to deal with being locked up. His brothers and Grace and even Gram suffered while he was gone. We saw some of what the brothers went through, but there will be more to come as the rest of the Bailey boys get their due. I legit screamed at the end of the epilogue with that tease for the next book to come!

Like in Protecting You, narrators Aaron Shedlock and Samantha Cooke nailed their performances of Asher and Grace! Aaron perfectly brought to life how haunted and lost Asher is upon his release, while Cooke brilliantly dug into all of the hopes and fears and crushed dreams that Grace has been holding on to for the past 7 years. When she finally lets go and lashes out at Asher -- I listened to that scene three times!

I know how much of her own heart and soul Claire Kingsley put into Asher and Grace's story, and it shows! This is an epic, tragic, heartfelt, healing love story, and a fantastic start to a new series by one of my favorite authors!

You know he's something special. You just have no idea how much he's worth fighting for.

He's so good. And loving.

He just has trouble expressing that these days.
And I don't blame him.

He's not the same man from seven years ago.

He's lost some of that innocence. But he's worth every single minute you spend with him.

Wow, I haven't cried this much i think for any book. My heart ached for Asher and Gracie, fighting for and against their love. I thought protecting you was heart wrenching but the 2nd book was even more so. Ashers anger and PtSD and reentering society after trying to survive in prison and the anger he kept inside. Gracies faith and love for him was eternal. The narrators did an awesome job, don't forget the tissues. The only negative was the Epilog it had nothing to do with what their future held, the final day they were married or the children and home the created, it was disappointing, even if it set you up for Evans Story, still think it should have showcased Asher and Grace's HEA

This is such a great story. Definitely worth the read/listen. You will not be disappointed.

I enjoyed this story so much!! It was a different love story. Highly recommend this series. I cannot wait to listen to the next one.

Audio as good as the book!

This audio book was so good I couldn't turn it off. The narrators were perfect! I almost think listening to it was better than reading it! I just love these brothers and Grace and Cara and even Grams!!