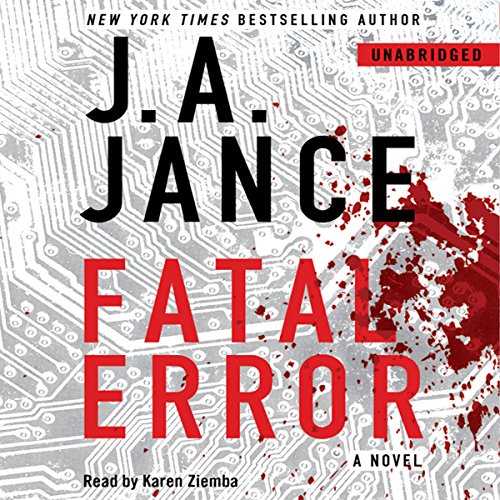 By: J. A. Jance
Narrated by: Karen Ziemba

New York Times best-selling author J.A. Jance delivers another pulse-pounding tale of suspense where no one is safe from a Fatal Error.

Ali Reynolds begins the summer thinking her most difficult challenge will be surviving a six-week- long course as the lone 40-something female at the Arizona Police Academy—not to mention taking over the 6:00 AM shift at her family’s restaurant while her parents enjoy a long overdue Caribbean cruise. However, when Brenda Riley, a colleague from Ali’s old news broadcasting days in California, shows up in town with an alcohol problem and an unlikely story about a missing fiancé, Ali reluctantly agrees to help.

The man posing as Brenda’s fiancé is revealed to be Richard Lowensdale, a cyber-sociopath who has left a trail of broken hearts in his virtual wake. When he is viciously murdered, the women he once victimized are considered suspects. The police soon focus their investigation on Brenda, who is already known to have broken into Richard’s home and computer before vanishing without a trace. Attempting to clear her friend’s name, Ali is quickly drawn into a web of online intrigue that may lead to a real-world fatal error.

I had been looking forward to reading more about Ali. The subplot was interesting, but mostly standard formula for thrillers. This story did not have the "punch" of the previous stories. I missed the family connections, her son, her parents and being in the diner, and her relationship with an old boyfriend. No true connection between the characters. Lack of romance or a hint of it. Also, the loss of her website or blog hurt the storyline. I kept waiting for the story to get better. Stay with the familar components of the character's past and relationships. I wonder if I missed an installment of the storyline.

if this was a free bonus download, you would still feel jipped. You high school math teacher could hold your attention better.

9 of 10 people found this review helpful

Fatal error in purchasing this Audiobook.

I've listened to two hours and quit. This belongs in the bodice-ripping "Women's Fantasy Romance"
category, not Mysteries and Thrillers.

13 of 15 people found this review helpful

Karen Ziemba does a good job reading this series. She has done all the books so far so she has become Ali to me. I was hoping this book would build on the last book. This story does have her in the police academy and graduating but then no job. I wished she did continue to work at the sheriff office. I hope this was just a side story and will get back to her as a local police officer. The only connection that was continued in this book was Ali helping out her parents at the cafe and the waiting for her grand child to be born. Jance did her usual fast pace writing and excellent command of the English language.

8 of 10 people found this review helpful

This was probably the worst audiobook I have ever listened to, but I made it all the way through. Bad book, bad narration.

always enjoy J A Jance books. Never boring. Keeps you on the edge of your seat the whole novel.

J A Jance does it again!!

Am constantly amazed at how J A Jance keeps coming up with new but captivating fictional novels. Each plot well planned out and the research done in them is exstensive. Fatal Error, as good as all the others. I have read all the JP Beaumont and JoAnne Brady series as well as these. Simply great!

I love Jance's storylines, and the narrator is one of the best I've heard.
I'm hooked on the series!

GOOD BUT NOT GREAT

What made the experience of listening to Fatal Error the most enjoyable?

It was a good story . . . a story that dealt with current events and situations.

What was one of the most memorable moments of Fatal Error?

The parts where Ali and Gil let the FBI SAC know through sarcasm how wrong his thinking was. It is NOT OK for any agency local or federal to put peoples lives in danger to catch someone breaking the law.

I think the book's name says it all FATAL ERROR. Because everyone made errors from Ali, to her boyfriend, to the Grass Valley Detective to the FBI and the victims and bad guys!!!! Unfortunately those errors caused people to lose their lives.

J.A. Jance never disappoints me and this book continues that trend. Ali Reynolds is a well developed character for Jance. and the story holds one's interest.The person reading the book is excellent and the narration does not distract from the book as it can sometimes. I would recommend this book.