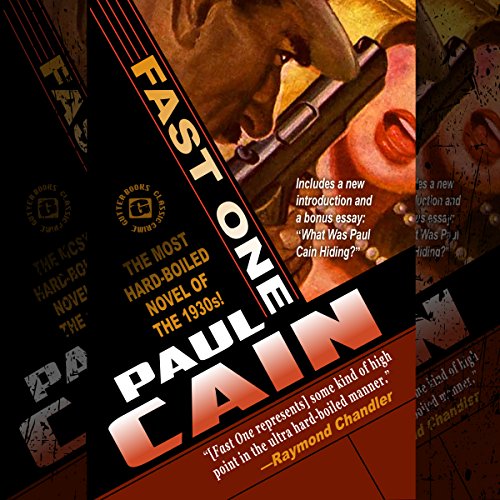 It's the last days of Prohibition and the first days of the Depression and East Coast crime bosses are vying for control of Los Angeles. Caught in the middle of the intrigues is Gerry Kells, a former New York enforcer now living a life of ease on the West Coast.

As the fiercely independent Kells rejects the appeals of various crime bosses who want to make use of his talents, powerful forces align against him. Being framed for a murder turns out to be the least of his troubles and as the stakes get higher, and the odds get longer, it's only Kells' nerve and toughness that keep him one step ahead of the law - and the reaper.

Featuring one of the most brutal finales in crime fiction history, this lost 1933 masterpiece took hard-boiled writing as far is it safely could. Some say too far.

What listeners say about Fast One

The introduction at the beginning of this book says that Paul Cain wrote the story by stitching together five of his earlier short stories into one novel, and that’s just how it feels, a long short story.

The plot is just a vehicle for moving from one action scene to the next so don’t expect any subtlety or sophistication here. There’s very little if any character development. It moves at a frantic pace with everyone trying to cheat everyone else. There are no truly good guys in this story, not even the hero.

Having said all that, I enjoyed it in a cartoon strip, “biff”, “pow”, “blat” sort of way and I think a lot of that was due to the excellent narration by John Bell. Although the story only rates 3 stars for me John bell gives a 5 star performance so I'm going to give the whole thing 4 stars.

If you haven’t read any “hard boiled” detective novels before then don’t start with this. Try “The Big Sleep” or “The Maltese Falcon” first. But if you’re a fan of the genre, then, while it’s no Raymond Chandler, you might find it entertaining.