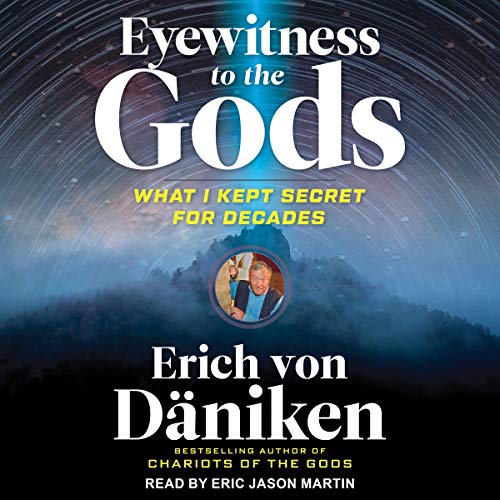 Eyewitness to the Gods

The father of the ancient alien theory with more than 65 million books sold reveals everything he has withheld for years.

In all his years of service, why didn't Erich von Däniken ever doubt his theory that inhabitants of other planets had come into contact with humanity ages ago, and that they still observe us today?

How could von Däniken in all these years say firmly that the UFO phenomenon is real and that people are being abducted by aliens? Why does he repeatedly criticize the official historiography and our religions and thus accept scorn and hostility?

The answers to these questions are: Because Erich von Däniken spoke to people who supported his theories. Because people who saw UFOs or were kidnapped by aliens trusted him. And because experts and insiders inaugurated secrets known to only a few people.

In this audiobook, the now 81-year-old presents selected eyewitnesses and insiders for the first time, reveals secrets and stories that he has hitherto kept private, and presents reports and revelations that leave one speechless!

What listeners say about Eyewitness to the Gods

Where are the new revelations? Same old stuff, gone over again, disappointing book, I'd give this one a miss.

Interesting Book.... Worth A read

I liked the bible related story, never heard that information anywhere before, eye opening.
Other interesting stuff as well... book is on the short side at 4 hours 14 minutes, but I enjoyed it a lot.
nice book, Daniken "The Ancient Alien theory grandfather" ;-)

Just a big ego trip absolute waste of my time listening to the book as it had no worthwhile contacting as far as I was maybe some Of his other books are much better?

Narrators pitch goes up at the end of nearly every sentence which gets to you when you notice it! Good book though 👽

Yet left with more questions than when I started

Was hoping they this book would have more information about present day discoveries. Was a bit disappointed. Should have done my own homework and read the reviews.

mostly a summery of thoughts and no new information. I was hoping for more new insights.

thank the US Navy for this one

you can tell he had this on the backurner just waiting for something like the navy saying UFOs are real.

Enjoyed hearing all about the ancient ones. Hope no one thinks anything more than a great story.

…it took some time to get past the way the reader says “nuh” or “yuh” after every word or phrase. Like he’s Smithers meets Rod Serling.
Once I got beyond that I had a great time listening.
Great to have an open mind.

Enjoyed yet another book by Mr. D. Very insightful and well narrated. would like to have heard Mr. D. do his own narration.

more great information from von daniken, highly engaging although the narrator had a mannerism that became annoying after a few chapters.

Narrator was horrible! Sorry but it was painful to hear his voice...almost always seemed like it was a condescending sound to it. Weird ending tone to statements/sentences.

loved it all his books are great , I wish there was more to say on the subject

Again, this is another outstanding book by the master himself. I am always amazed with the information that is given as it always makes me question the truth and or lies about the existence of other worldly beings. As always, another collection added to the library. Don't hesitate to check this one out!