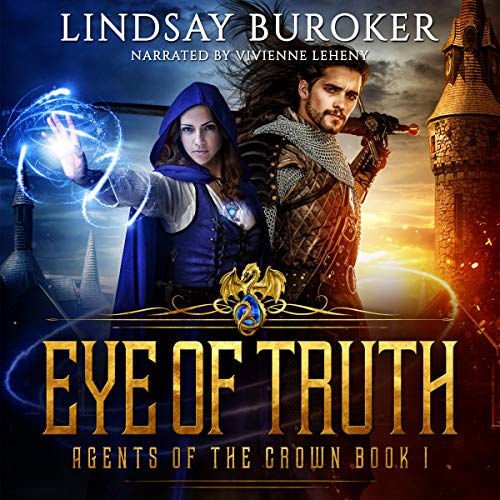 By: Lindsay Buroker
Narrated by: Vivienne Leheny
Try for £0.00

After 10 years at war, Jev Dharrow looks forward to hanging up his sword, relaxing with a cool mug of ale, and forgetting that the love of his life married another man while he was gone. But when his ship sails into port, a beautiful woman wearing the garb of an inquisitor from one of the religious orders waits to arrest him.

His crime? He’s accused of stealing an ancient artifact with the power to start another war. Jev would gladly hand over the artifact to stop more suffering, but he has no idea where it is or even what it looks like. The inquisitor woman definitely has the wrong person.

Inquisitor Zenia Cham grew up with nothing, but she has distinguished herself as one of the most capable law enforcers in the city, and she’s next in line to become archmage of the temple. All she has to do is find the Eye of Truth, and her superiors are certain Jev has it.

He tries to charm her with his twinkling eyes and easy smile, but she’s not letting any man get between her and her dreams. Especially not a thief.

If Jev can’t convince Zenia they’re on the same side, find the artifact, and clear his name, his homecoming will turn into a jail sentence. Or worse.

What listeners say about Eye of Truth

I really struggled to get through this book. I’d just finished listening to this author’s Death Before Dragons series which was excellent, and got this book hoping I could capture some of the same feeling with another one of her books. However, the main characters were either lacklustre or utterly annoying (in the case of the heroine), and the plot was just daft. Absolutely zero chemistry in the developing relationship either. What a disappointment.

This is a (future?) love story between Jev Dharrow, a soldier back from the war with both physical/emotional scars and Zenia, a paranoid Inquisitor who arrives to arrest him straight off the boat on his return accusing him of stealing an artifact. Jev is an easy going, witty and handsome man, of course, (they all are) who takes everything in his stride.

Not quite sure how this will go. It seems a little slow, but I will try Book 2 to see if it picks up.

underwhelmed by the book, unlike LBs Fallen Empire, all of her other lead male characters seem timid, even veteran soldier who fought in the war for 10 years. I really like the narrator, she did a fantastic job, too bad the characters didn't live up to her level. The male lead is not very smart for someone who was the Captain of an intelligence company.

This is an amazing audiobook with a great narrator and breath taking characters. I'll be reading the whole series!

Definitely an Author I'll be adding to my library

This had been a truly great book to listen to. The story had been compelling and the characters had been likeable and felt flawless within the world. I will have to be sure to add more books by this author and look for others with the same Narrator. The narrator had been phenomenal.

I have no idea if I liked this book or not. It was interesting, about a relic that was stolen and all that happened to find it.

I liked Jev and Zenia but not as a couple. I didn’t feel any kind of chemistry at all between them. So, if the author was trying to write a romance she failed. I’m not sure I’d want to go forward with this series.

There was nothing even resembling romance! AND no swearing to speak of, what was supposed to be swearing was just silly, “By the Founders,” “Four Founders, it was dark in these mangroves,” By the pointed teeth of the Founders,” maybe not silly as much as stupid.

As to the narration: Vivienne Leheny was just okay for me. Her voices were fine but sometimes she was sooo dramatic and other times she read like a robot. She wasn’t consistent.

A great start to a new series

I received the audiobook for free as a Patreon supporter, but I would have purchased it if it wasn't a reward and my reviews are always honest. I also read the first 10 chapters on Lindsay's blog, but I think the audiobook brings the characters to life and I'd highly recommend "reading" it that way.

The book started slowly for me and that's the reason for 4 stars rather than more. At first, I did not like the female lead, Zenia. Once Lindsay hit her stride though, I fell in love with the two main characters and the story. I'm very excited for the next book which will be out soon.

Most enjoyable. Good start to a new series. I like Jev Zinder Darrow's personality. Very steady and very sensible. Zinnia is excellent too. Both main characters are very likeable. Action wise not bad but I hope there will be more "zest" to it. The narration/performance is good. Vivienne Leheny brings the characters go life with the different voices. Lindsay Buroker is a very talented writer and I love her books.

love this beginning to series

this is the 3rd series I'm reading from this author. it started slow, but then I got hooked around chapter 3. I didn't want to stop listening..

Great story fantastic characters. I love the banter and can’t wait till book 2 is available

Lindsay Buroker writes the most likable characters. This book reminded me of the Dragon Age video game series in the best way, with elements of steampunk. I like how lighthearted it was but hope the next one includes some grit. Overall really amazing.

The storyline had potential, but my gosh, the romance plot was cringe-worthy! I think the plot would have done better without the fumbling romance, or at least, been allowed to develop more naturally at a later stage

Writing after finishing the series. I hope there will be more books from this world!

This story is well crafted, balanced, and engaging. The world is unique and intriguing (not quite high fantasy, there isn't a lot of back story to be found, but it is well described and paced). The characters are pretty well developed and relatable. There is a romance/love story wrapped in there, but honestly it is really well done. If you have read the Fallen Empire books, that love story never quite fit the setting. This love story is very similar, but actually works in this setting/with these characters (I guess what I'm trying to say is I have found other romances in Lindsey's books a bit of a distraction, but this one worked really well).

I liked the narrator, but I saw several people complained about her. If this is you, I recommend you increase the speed you are listening to, it will help.

P.S. Part of why I liked this series so much is because it is almost a fantasy mystery series (a vastly underrepresented genre).