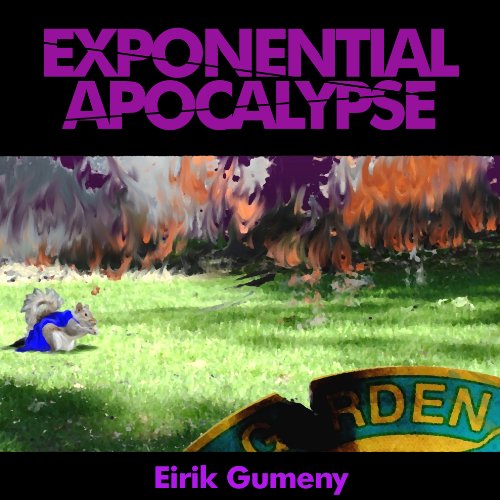 By: Eirik Gumeny
Narrated by: Lee Ann Howlett
Try for £0.00

There had been twenty-two apocalypses to date. There were now four distinct variations of humanity roaming the Earth - six, if you counted the undead.

It had been suggested that there really should have been a new word to describe "the end of everything forever," but most people had stopped noticing, much less caring, after the tally hit double digits. Not to mention the failure of "forever" in living up to its potential.

The last apocalypse wasn't even considered a cataclysm by most major governments. It was just a Thursday.

Exponential Apocalypse is the tender, heart-stirring tale of crappy jobs, a slacker cult, an alcoholic Aztec god, reconstituted world leaders, werewolves, robots, and the shenanigans of multiple persons living after the twentieth-aught end of the world. Fast-paced, frenetic, funny, and frequently fond of other f-words, Exponential Apocalypse is the only book that will have you looking forward to the end of the world.

What listeners say about Exponential Apocalypse

When the apocalypse becomes just another day

The simplest way to describe this book would be, delightfully silly, at times it evokes the irreverent style of the likes of Pratchett or Adams, albeit without reaching such heights overall.

This is not your typical post-apocalyptic book, the premise is that there have been so many that they become almost mundane and people just have to get on with things anyway, at some point in the past science disproved religion so one of the main characters in this book is Thor who now works at a rundown NJ Holiday Inn where the other staff are a regular human and their manager who is a cyborg. Other notable character in the book are some clones of former presidents and Queen Victoria along with a super-powered squirrel named Timmy, which sort of lets you know what you are in for with this book.

The narration was decent overall, but it didn't really manage to elevate the book in the way that some performances manage to do so for some reason, but equally it did not detract from the book either and the narrator still managed to give suitably distinctive voices to all of the main characters.

Overall this was a quick and enjoyable listen and I would definitely consider future books from this author as I enjoyed the distinctive style of it quite a lot.

[I was given this free review copy audiobook at my request and have voluntarily left this review.]

I don't think one more Apocalypse will kill us.

So you think what might happen after the apocalypse? Think again. Or, better yet, read this book. Not one, not two but 22 (and counting) have come and gone in this very funny story where we are initially introduced to a number of disparate characters before, in the latter third, we encounter the four horsemen and another battle to stop the end of the world.

Irreverent, silly and often laugh out loud numerous, especially in the earlier parts, this is a deliciously silly book to dip into with fallen gods and replication world rulers as well as a smattering of humans and zombies, all just trying to get by in a world not just gone mad but totally insane. Lucky that they are, too.

Narrator Lee Ann Howlett, unfortunately, was the wrong choice to read this crazy concoction, though she made a valiant attempt. She simply did not have the low range to cope with the numerous male voices (though I must comment her for her constant flat, deadpan rendering of Thor, throughout: marvellous) and a little more depth and warmth for the story would have made for a better listening experience.

I can't really say much more about this story other than read it yourself if crazy comedy is your thing. My thanks to the rights holder who, at my request, gifted me a complimentary copy of Expotential Apocalypse, via Audiobook Boom. It was an experience which has stayed in my head long after the final crack of doom sounded.

I did not think I would enjoy this book as much as I did; it was laugh out loud in many parts. It is not your typical post –apocalyptic book, it not only contains walking and talking zombies, robots, fallen gods, drones, werewolves, few humans, you name it their there. You will notice the take on some of the characters fiction and real. My favorite part was the doctor. Recommend if you want a different laugh. I was given this free review copy audiobook at my request and have voluntarily left this review. Thank you!

author has a great sense of humour, fun plotline and as this is my first audiobook I'm impressed with this book

Would you listen to Exponential Apocalypse again? Why?

Oh yes, I'm sure I will as there are plenty of things I probably missed the first time through.

What was one of the most memorable moments of Exponential Apocalypse?

The "morning after" awkward conversation was hilarious and well written. Also "are we there yet?" I'm not sure why I found that part so funny, but I truly did laugh out loud at all of that.

Which character – as performed by Lee Ann Howlett – was your favorite?

She does such an excellent job with Thor!!! Her droll intonation matches exactly to how I imagine Thor to be after transitioning from the exciting life of a mystical god into an existence that lacks....a lot...of everything.

If you could take any character from Exponential Apocalypse out to dinner, who would it be and why?

It would be Thor and I would both pay and do the ordering. Answer too short, word word.

Glad I picked this up and took a chance even though it had no reviews at the time. It's a fast fun listen.

So, this was both a hit and a miss for me. I liked the satirical, snarky feel of the story. I liked that there had been so many apocalypses that people took them in stride. It very much had a British humor feel to it, with the dry sarcasm. That being said, I was rather disappointed in the narrator, though, as the sound quality wasn't great, and she had a monotone delivery throughout the book. I can give her some ground, as that was probably on purpose for the style of story, but it just missed the mark for me. I think this one would be much better to read.

Douglas Adam in a Future Apocalypse?

Eirik Gumeny created Exponential Apocalypse a world of a humorous take on the apocalypse in the style of Douglas Adams. The story bounces around between 3 or 4 different stories within this 23rd apocalypse. I honestly struggled to finish this audiobook. I am a fan of post apocalypse fiction and Douglas Adam, Red Dwarf, and Hot Fuzz but for me, this just fell really flat.

The narration was provided by Lee Ann Howlett. Ms. Howlett voiced a variety of characters in this story. I may have been in the wrong mood to listen to the story but I just did not enjoy the narration, maybe it was the material for the voice actor who knows or maybe I was just being grouchy the day I listened and it affected my review.

This review copy audiobook was provided by the author/narrator/publisher free of charge via Audiobook Boom for an unbiased review.

This was a great tongue-in-cheek listen on a post-apocalyptic world. The book was well-written with many humorous takes on the world and its inhabitants. It deserved a better narrator.

The narrator failed to capture the cadence and the lilt needed to make this book work as an audiobook. I stopped listening and went to the Kindle version.

Odd book, had some difficulty with the narrator.


This book was provided at no cost for a unbiased review.

The narration killed this book

Sadly I expected much more from this book. I liked the premises, the world had so many apocalypses that one more is just routine. The book is written in a satirical tone that I expected to make me chuckle, but for some reason I didn’t care much for it. I just didn’t get all the jokes, and the fact that even gods “returned” to Earth was a bit ridiculous. I also didn’t buy all the different races that populated the planet.

I also had issues connecting to the characters, and didn’t really care for them.

I think one of my main issues was the narration. I probably could have finished the book if it was at least okay. The narration was delivered in a monotone tone with changes or inflections. I am not sure if it was intended, but it just didn’t work for me. I also didn’t notice any clear difference between characters, and this contributed to the fact that they were not very developed.

I really liked this story and the setting it took place in. There was a silliness to it that had a kind of Terry Pratchett / Neil Gaiman / Adam Douglas feel to it (definitely a good thing). My only complaint here is that some of the character narration felt a bit repetitious, e.g., repeating a characters name what felt like every sentence at times. I'm not sure if it was just me or maybe because of how they were voiced but there were a number of times i couldn't help but think &quot;how many times are we going to hear so and so's name?&quot;

On the narration front it was difficult to listen to at times. Part of it may have been the editing, i.e. the dialog felt a bit clipped at times, especially when the conversation switched between certain characters. It kind of felt like the recording was done at different times per 'character' and then were edited together (sometimes poorly). From the performer side (Lee Ann Howlett) I could not stand Thor's voice (sorry). Most of the other character narration was good but some characters did not feel right (for me).

Overall, i'd say this is worth a try. Definitely worth a read and worth a listen if you are flexible with your narrator style.

I received this book free from Belfast, the author and publisher in exchange for by unbiased options. It is a strange book, but pretty entertaining. I enjoyed it. the narrator could be better. but all in all a good book