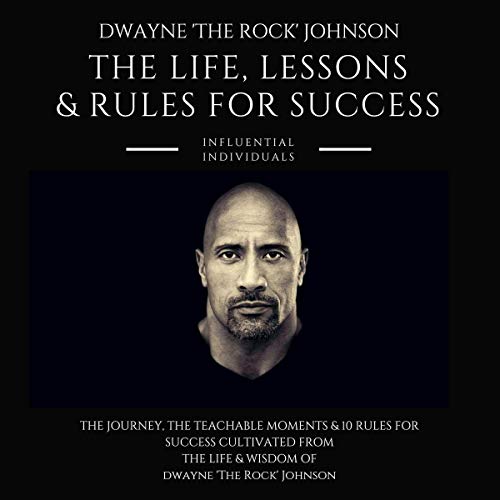 Dwayne 'The Rock' Johnson: The Life, Lessons & Rules for Success

By: Influential Individuals
Narrated by: Jeffrey Howard
Try for £0.00

If you’re looking to be inspired by someone who has truly made the most of life’s opportunities, then listen to this remarkable story of one of today’s most well-known celebrities.

Dwayne "The Rock" Johnson is best known as a former professional wrestler who later came to dominate Hollywood with a series of blockbuster movies. His powerful on-screen presence and strong physique give the impression that he effortlessly reached global success, yet Dwayne faced a series of challenges and setbacks as he rose to the top.

From being homeless as a child and later having little more than $7 in his pocket to facing the reality that his dream career in football was over, Dwayne’s life hasn’t always been a linear track of successes. However, rather than let this bring him down, he never gave up and pushed himself to be the best he could in everything he applied himself to.

If you want to discover the story behind Dwayne’s extraordinary success, this book takes you on a journey from his childhood to how he became one of Hollywood’s most well-known action figures. Strip away the glitz and the glamor, and you find a remarkable story of persistence, commitment, and deeply ingrained work ethics that kept Dwayne moving forward to where he is today. If you want proof that success is rarely served on a silver platter and the majority of successful people have to sweat blood and tears to reach their goals, then Dwayne’s life story will give you exactly that.

In this book, you will find:

Are you ready to take a journey through life in the shoes of Dwayne “The Rock” Johnson? Then buy now, and let's get started!

What listeners say about Dwayne 'The Rock' Johnson: The Life, Lessons & Rules for Success

This is not a book, it's an article

Was quite disappointed by this "book". I'd call it an article to tell people how great Dwayne 'the Rock' Johnson is.
Don't get me wrong, I think the guys great, hence buying the book. But this book isn't what you need to read to realise that

The narrator is terrible, extremely robotic and speaks at 100mph none stop.
I've tried by coming back to this audio book several times, but it's impossible to put up with.

I'd give it no stars if possible.

Seemed rushed. Wanted to delve more into Dwayne Johnson’s life stories and journey. Also, narration from Johnson himself would be a great dynamic.

Found the narrator very dull and uninspiring, gave up in the audiobook after two chapters.

Dwayne is not in it.

It might as well be fan mail. It absolutely sucks. I want my money back. maybe tell me how to change this for another book. I haven't figured out how to do that yet

This was just the motivation I needed for my run this morning. Didn't even realise I'd been running for over an hour!

ok for an hour

Mot much I didn't already know from interviews. won't be buying the auto biography

I have always liked Dwayne Johnson, but I must admit before listening to this review I would not have considered using one of my credits to buy his autobiography. Actually, I hadn't realised this was a review of his autobiographical works before I bought this book, but I think the author has done a terrific job condensing the key milestones and outcomes. My only complaint would be that the end of the first chapter starts to sound like someone just reading out an IMDB filmography list and isn't particularly value adding. However, this didn't detract from the overall review which I thoroughly enjoyed.

Typically I have avoided autobiographies in my reading, (moreover due to my own literary ignorance) however I will be getting more of the titles by Influential Individuals to see if the full book would be something I'd find interesting. These reviews are also short enough to act as a quick reference point.

overall, I would highly recommend this series of reviews.

loved it, at a time (covid-19) where I was low and needed motivation
thank you

A well told story of facts.

Narrator did a good job but it was too many facts without enough motivational content.

I feel like I just read a Wikipedia page

While the information is interesting, there's nothing here that can't be easily found on the internet. I was hoping for some insightful information from The Rock. there needs to be way more detail about the events of his life. A one hour read should have been a red flag.

Great info on The Rock’s life

I love the story and I truly identify a lot with his young life. Now if I can just manage to get the my adult life to have some similarities I will be on to something. The only thing I did not like is I wish he would have narrated his own story. I feel like authors who do that have more success with their books because listeners can feel the soul of the words coming through their voice.

i basically paid $5 for information I could read about on Wikipedia. not worth the buy.

I really thought this would be an inspirational book however it was more like the Rocks resume. A little bummed out about it.

It’s the same formula for all these successful people. Hard work and believing in yourself. It’s a short book but a great one.

Brief synopsis of his life

I made the mistake of not checking how long the title was. I was hoping for more of biography or memoir similar to Green Lights (Matthew McConahey) or Can’t Hurt Me (David Goggins) this turned out to be a brief summary of the Tv show about his life. I was really interested to learn more about his life and trials, I’m pretty disappointed I wasted my credit on this.

I love this. It really puts things in perspective. It's amazing what people go through only to rise up. This is a very inspirational story. 👏

Repetitive time-line of the Rock's career. More like his resume. If you're looking for motivation, look elsewhere.

Very inspiring! Short and simple but a very powerful message ! Time to get focused on my goals 😊