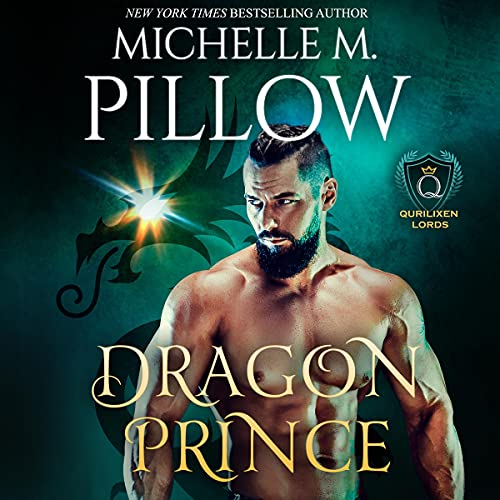 By: Michelle M. Pillow
Narrated by: Michael Ferraiuolo
Try for £0.00

Grier’s fiery passion for Salena might be everything his dragon ever wanted, but loving her might just lead to the destruction of everything he’s trying to save.

With all that is happening in his land, the upcoming shifter mating ceremony is the least of Grier’s concerns. Even though he is heir prince of the dragon-shifters, he doesn’t have the authority needed to help the humans stranded in dragon territory, nor can he banish those who ruthlessly control them. Yet honor demands he finds an opportunity to intervene, and he hopes that doing so won’t start a war the shifters can’t win.

Discovering his destined mate couldn’t have come at a worse time. Salena knows what it is like to be a pawn of the Federation. They might have kidnapped her and brought her to this strange territory, but she will never do what they want of her...what everyone wants of her. The last thing the fugitive needs is the very public attention of a fierce dragon prince claiming they’re fated by the gods - even if the sexy man makes her burn in more ways than one.

“Filled with intrigue and adventure, Dragon Prince: A Qurilixen World Novel is an exciting new spinoff in a rich and intricate universe. Michelle Pillow creates characters to cheer for, to hope with, while building worlds that are portals for the imagination. Truly, Ms. Pillow is a master of futuristic fantasy.” (Yasmine Galenorn, New York Times, Publishers Weekly, and USA Today best seller)

What listeners say about Dragon Prince

Book one of the Qurilixen Lords sees a return to the world of dragon shifters though now set in the future where the original kids are now grown up and facing their own fate. Prince Grier may be the heir but he not convinced that he is destined to meet his mate and is more focused on helping the people stranded on his planet.
Salena has been kidnapped and brought to Qurilixen, all she wants is to escape.
Another fabulous return to the home of the dragon shifters.

Fantastic new spin off of The Qurilixen World . This follows Grier who is the prince of the Dragon shifters as he finds his mate Salena . However things never go easy for the males in the QW and although everything is against them love wins out in the end.

Adventure and Romance with a Dragon Prince

Full credit to the author and her ability to draw you into the Qurilixen work! This is Grier and Salena’s story. Grier is a perfect gentleman, with a strong sense of duty and honour. He is patient with Salena and doesn’t push her into a union with him. It’s wonderful to see their romance blossom! Great narration and as is always a case with Michelle M Pillow’s books, a perfect blend of adventure, romance and as always, great storytelling.

I want a dragon prince!

Dragon shifter!!!! Enjoyed this story of paranormal romance. The characters are likable and entertaining. The storyline and world are interesting. The narrator did a great job with providing unique voices for each character and appropriate tone inflections for each scene. I received a free copy of this audiobook at my request and have voluntarily left this review.

Grier is the Dragon Prince. When his bracelet going off signaling his mate is near him, he looks high and low, finding nothing. His bracelet goes off again, when Grier goes looking he finds Selena. I like when Grier and Selena get to know each other. I also like how a different series was mentioned in this book. The steamy parts weren't very detailed, I liked that. This book was very enjoyable. I recommend it.

The Next Generation of Draigs and Vars

Grier, dragon prince and future king of the Draigs, has been watching the human refugees. He wasn't planning to find his life mate in the encampment.

Salena and her sisters have a special gift. Because of their gift, they were kidnapped to serve the Federation. Salena was lucky to escape the Federation. What she didn't expected was meeting Grier at the mating ceremony and to return to the Federation to rescue her sister Fiora. This time she has Grier and her new found shifter friends to help her.

There are moments in the story that is humorous. I love Grier's friends especially Payton. Payton is so hilarious. The good thing about it that their friends are supportive of Salena and Grier.

I love how the Draig Queen put the General in his place. I won't say how so you will have to listen or read the book.

I was given this audiobook by the author. I decided to voluntary write an unbiased review for this book. I was not compensated or influenced in writing this review.

Great dragon story linked by portal and pirate space ship to another of my favourite series by this author Michelle. This book is full of adventure , risk and of course happy ever after love. Very entertaining. I recommend it.

This is book 1 of the series and is a stand alone book with a wonderful HEA. Had to listen to it in one sitting, could not wait to hear what happened next. The narrator did an awesome job of bring each character to life and pulling you into the story. Looking forward to the next book in the series.

This is the first book in the Qurillixen Lords Series, a dragon shapeshifter romance, and a spinoff of the amazing Qurilixen World. This is a great start to this Series. Grier, the prince of the Dragon Shifters, and Salena's story is action packed, steamy, and entertaining. Salena's past is heartbreaking. I liked the humor, the fantastic characters, the intrigue, and the twists and turns. The supporting characters are intriguing! The world building is well crafted, intricate, and captivating. Michael Ferraiuolo did a great job with the narration. Looking forward to listening to the next book in the Series. If you like Paranormal Romance, this new Series is for you.

I was so eager to listen to the first installment of many in the Qurilixen world. I love how they all connect at some point. Grier is this sexy dragon shifter prince who doesn’t let his title go to his head. He’s loyal and fierce. He believes he is cursed by the gods. That is until Jaxx his brother has come across someone.
In this world we have the Federation that live alongside the dragon shifters and their peace is tumultuous at times. Grier must decide if finding his mate and holding onto her is worth the war that it may cause. Certainly a engaging book and the narrator does a wonderful performance portraying all of the characters.
If you enjoy dragon shape shifters romance then you will certainly enjoy this series.
I absolutely love Jaxx. He is so lovable.

Dragon Prince by Michelle M. Pillow
These Qurilixen shifters are soooo addictive!!
Grier and Salena's story is full of adventure, witty humor and steamy goodness! I couldnt put it down!
Great audio narration that brings the story and characters to life!

Michelle M. Pillow did a great job with this latest addition to the Qurilixen World. This was a great start to a new series within the Qurilixen World. The characters are well written and entertaining while the story line was engaging. The narrator brought this story to life and made this a joy to listen to. This book is fantastic for anyone that likes to listen to or read a book. I happen to love both.

I received an ARC of this e-book and a copy of the audiobook and I am voluntarily leaving my honest review.

What do you get when cross a truth sayer fugitive and a prince dragon shifter who believes the gods have cursed him?!!! Fun and adventure. This story is witty and fun. The fast pace keeps you completely engrossed and wondering what crazy is going to happen next. I love the mash up of shifter world and space because it gives this series such a unique vibe.

I couldn't stop listening. The world building was great and the characters are extremely likable. I also like the fact that the dragon shifters can half shift & that the Var are all different kinds of big cats.
The main female, Salena, has a backstory that will break your heart but she has a very interesting aspect. The main male, Grier, is sexy, gruff & sweet. I personally thought Jaxx was the funniest but I liked Payton's wild & defiant nature.
A must listen! I can't wait for the next audiobook!