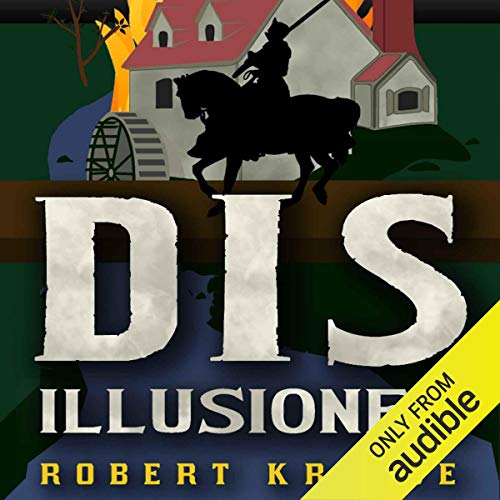 Disillusioned takes place a little over 100 years after the climactic Battle of Brandsvied at the end of Disenchanted.

The Battle of Brandsveid brought together every king and nobleman in the land in an epic struggle for the future of the Land of Dis, as the armies of the Six Kingdoms united against the monstrous army of Lord Brand. It was the event Vergil, a knight in the service of the Order of Avaress, had waited for his entire life. Unfortunately, he slept through it. In fact, thanks to an accident involving some magic powder, Vergil slept through the next 100 years as well, finally awakening in a world irrevocably changed by the outcome of that epic battle.

Finding himself suddenly an old man, Vergil must try to navigate this strange new world with only the help of his slightly dim but well-meaning servant, Handri. Despite the peaceful, civilized veneer of modern-day Dis, Vergil is convinced that a great evil still threatens the land, and he and Handri set about to uncover and vanquish it. But Vergil's prejudices and chivalric principles prove worse than useless in this strange new world, and he succeeds only in getting himself deeper and deeper in trouble while stirring up simmering animosities between goblins and humans. Can Vergil separate illusion from reality and uncover the true threat to Dis before it's too late?

What listeners say about Disillusioned

Okay but not as good as the first two.

The narrator is excellent as always but I didn't care about the main character until the very end.

It didn't engage me

This is so far the weakest book on the series. There are too much debating and not enough action and progress. The book never really made me care for the characters or the outcome of the story.

mind blowing and topical! Excellent and very subtle political satire...very dry humor and a fun read read. I highly recommend DIS series that isn't really a series but a place. Totally worth a credit!

A Poor Allegory for Race Relations

The books in the Dis series decrease in entertainment value with each installment. Disenchanted was great - lots of humor and fun adventure - and was followed up by Distopia, about which I had my complaints, but still overall found it engaging enough when it was funny. Disillusioned, however, lacks even the humor of its predecessors and feels completely disjointed from the series.

The characters were under-developed and thus uninteresting, and the plot was ridiculous, though not in the amusing way of the first book. Vergil is a fish out of water as a medieval knight suddenly thrust into an industrial era. Through his obstinate bigotry towards the "lesser" races in Dis and his general bumbling, he manages to cause all of the conflict in the book, and while neither of the protagonists in books 1 and 2 were written to be loveable heroes, I at least did not have to listen to hours of racism with them.

As an allegory for real society, the book falls flat due to the "lesson" on racism reading as though it was written by someone who thinks they understand a complex issue in which they believe they are not a participant. The racism demonstrated in the story is absurd not because it is antiquated behavior, but because it sounds as though the author has never talked to anyone who has actually been on the receiving end of racial prejudice.

I recommend skipping this one.