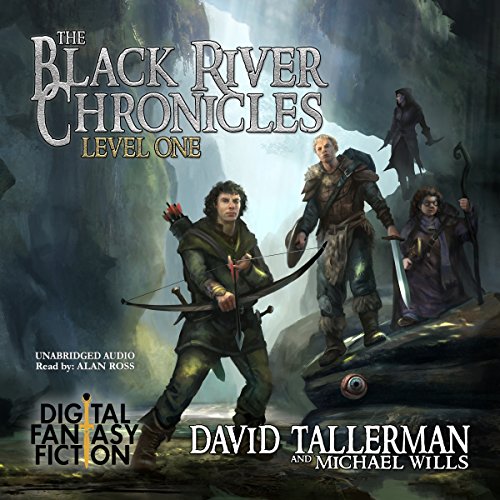 The Black River Chronicles, Level One

You know these characters: The ranger, the fighter, the wizard, the rogue. But haven't you ever wondered how they learned to be those things?

Three months into his studies at the Black River Academy of Swordcraft and Spellcraft, Durren Flintrand is shocked by the news that from now on he'll be assigned to a party and that his only hope of progressing beyond the lowly rank of level one is to succeed with his new companions. However, Durren has a secret that may make that impossible, and his three partners have problems of their own. Wizard Areinelimus is terrified of her own magic. Rogue Tia has no patience at all with others. And warrior Hule is just an idiot. In fact, when a disembodied, floating eyeball is your most competent party member, you know you have serious problems.

To stand a chance of succeeding, they need to work together, and that means learning to tolerate each other while surviving a world of angry rat people, murderous sorcerers, and homicidal unicorns. But even if they can somehow find a way to get along, dark and ancient forces are stirring, ones no level-one students should ever have to confront....

The Black River Chronicles is a new fantasy series from David Tallerman and Michael Wills. Set in an academy for young adventurers in training, the Black River Academy, our new dungeon crawlers set out to learn the ropes. Follow them in their adventures and misadventures and see if they save the day - or flunk out of school before earning their next level.

"[T]his book is a lot of fun. Surprisingly realistic fun. Enjoyable, immersive fun. 'I want more' fun. And there's a promise that this fun will be followed by more. At the same time, all on its own, this book tells a great tale that comes to a satisfying ending." (Ed Greenwood, The Archmage)
"[S]uperb pacing, competent writing, well-described action, fun situations, and appealing characters. The first in a series, the book remains a pleasant confection. Well-crafted fantasy fiction about a team of young trainees tackling dangerous missions." ( Kirkus Reviews)
"A fast-moving and energetic fantasy, packed with humour and magic." (Adrian Tchaikovsky, Arthur C. Clarke Award Winner, 2016)

What listeners say about The Black River Chronicles, Level One

Easily the best fantasy novel I have read in years

A perfect blend of mystery comedy and action while gently satirising all your D&D campaigns.

not the best but also no where near the worst

ok I won't hurry to get the next book but it was well worth a listen. liked the twist but had trouble adhering myself to the characters

I read the book a while ago and saw their was a second one out as well as an audiobook I get this and it's a really good performance but the ending stops abruptly without an explanation. The entire last part is just gone. That is really inexcusable.

The narrator was fantastic; saving me the tempting thought of not finishing this book. The story concept is interesting, but it is not written well. Heck, I was so bored during the introduction I thought about listening to something else. Throughout the book, there was a lot of "telling" and "explaining" when there could have been scenes that were "showing". To be honest, you don't really learn much about the characters and what you do learn is predictable and leaves you uncaring because it has nothing to do with furthering the plot. Whatever that plot is. Also the abrupt end left me rather dissatisfied. This book in a word: disappointing. I don't think I'll be investing in the series. If there is one. (Also, I did not get any feeling of "digital fiction" from this book. It felt more like someone poorly regurgitating their DnD campaign.)

fun, clean, and the characters were enjoyable. Highly recommend for anyone who wants a quick read!

This story was a lot of fun!

Good characters, nice plot. Is recommend this to any fantasy fans but especially anybody that plays role playing games.

The books ending was one of the worst I've read. battle ends. book ends seconds later. no wrap up at all.

We live the story line and are really hoping that Allen is reading the next.
However, What happened with Durrens father?
Did Durren finally figure out that Tia does trust him and grow up enough to apologize?
Hoping to find out as we start the next adventure.

I decided to listen to the book Because I had a long trip to make and wanted something entertaining. That being said I didn't have high expectations but it still lacked beyond what I really expected. There was no real character development, and the plot was severely underdeveloped. The end was incredibly disappointing, and it seems to me that the author pretty much gave up because they did not know how to end it. I honestly don't even see how this can become a series other than just a lot of unrelated stories. the characters themselves were not exactly original, they were somewhat intriguing, but all together did not serve much purpose other than having the traditional roles expected of an epic Tale

My daughter and I listened to this book together. We're both ready for book two. Please tell me that there will be a book two?

Boring. Prayed for a party wipe the whole time.

Pointless plot. Annoying characters. A narration that kept putting me to sleep. An ending that abrupt and offered no closure or resolution. so glad I got this garbage for only $1 on Amazon, instead of wasting an Audible credit... Hope there are no more books ever from this author.