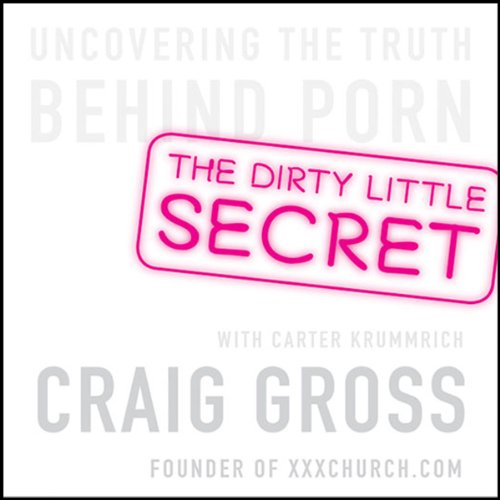 
Addiction to pornography has exploded in epidemic proportions, infiltrating churches and holding our pastors, friends, and family members prisoner. But no one – not even the Church – is talking about this dangerous and destructive addiction.

DIRTY LITTLE SECRET follows Pastor Craig Gross as he breaks the silence and begins his ministry, XXXchurch.com, a website devoted to fighting pornography. As he meets people in the industry and those addicted to porn, Craig exposes the very real human face of pornography and the destructive physical, emotional, and spiritual toll it takes. DIRTY LITTLE SECRET plainly reveals the addictive lure of pornography, explores the pain and brokenness it causes, and challenges us as individuals and as the Church to talk about and openly fight pornography. Its thesis: Don’t be tempted to keep this secret any longer, but roll up your sleeves and do something about it … to help at least one person break free.

Having once had a major issue with pornography, I am sadly familiar with much of the subject matter of this book. Gross writes about the harm of the porn industry in a matter-of-fact way, which cuts through all the stereotypes of the business and its workers and shows the raw truth of how horrible the world on the inside can be. The big glitzy stars in this world exist in only the top ten percent, and age is their biggest enemy. The countless other actors usually will do anything to just pay the bills. Drugs are a way of life to help most of these people get through a day on the set; women in particular are often treated like cheap cuts of rotting meat

“If I had just one person to confide in, this would all stop tomorrow,” he says. “I know it because I don’t want to do this any longer. I have kids now. I have a ministry. I have people who look up to me, and I feel like they don’t know me. Sin has controlled me and it sucks.”

Gross asks why this man and others like him just don’t tell someone and try to get help. The answer is almost always the same – the fear and shame of exposure, loss of employment and respect, the pain of hurting those who love him most and the emptiness of life without them

Gross goes on to write:

“Christians and other religious establishments send a cold message to sexual addicts. Sexual addicts are left with the options of accepting their behaviors and facing the emptiness or dealing with being pegged as a freak. From the point of view of a sexual addict, they only see judgment and harsh punishments when confronted with the options of confessing everything and changing. They fear being ostracized – like once they come clean, they need to knock on their neighbors’ doors or get up in front of a congregation and admit they look at porn and be forever branded a sexual deviant. What has happened to grace?”

Indeed, what HAS happened to grace? For instance, is it appropriate to fire pastors and youth pastors when they confess to looking at pornography as some churches have done? Does that help or hurt? Would we treat other types of harmful behavior this way?
Gross is writing to help the Church talk about a subject she by which she is ravaged, but thinks too embarrassing or dangerous to discuss. Christians, through fear, self-righteousness or ignorance, often demonize those touched by porn. Gross shows them (rightfully so in my opinion) as people made in the image of God—but also as hopeless and undone humans who, through their own inappropriate choices, now need His redemption.

Why did Craig Gross write a book that is certain to offend, yet hopefully enlighten? In his own words: