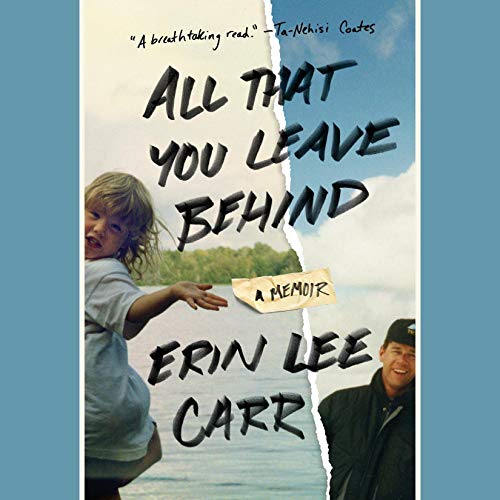 All That You Leave Behind

All That You Leave Behind

“A documentary filmmaker and daughter of the late, great New York Times columnist David Carr celebrates and wrestles with her father’s legacy in a raw, redemptive memoir.” (O: The Oprah Magazine)

“A breathtaking read...a testimony equal parts love and candor. David would have had it no other way.” (Ta-Nehisi Coates, best-selling author of Between the World and Me)

Dad: What will set you apart is not talent but will and a certain kind of humility. A willingness to let the world show you things that you play back as you grow as an artist. Talent is cheap. Me: OK I will ponder these things. I am a Carr. Dad: That should matter quite a bit, actually not the name but the guts of what that name means.

A celebrated journalist, bestselling author (The Night of the Gun), and recovering addict, David Carr was in the prime of his career when he suffered a fatal collapse in the newsroom of The New York Times in 2015. Shattered by his death, his daughter Erin Lee Carr, at age 27 an up-and-coming documentary filmmaker, began combing through the entirety of their shared correspondence - 1,936 items in total - in search of comfort and support. What started as an exercise in grief quickly grew into an active investigation: Did her father’s writings contain the answers to the question of how to move forward in life and work without her biggest champion by her side? How could she fill the space left behind by a man who had come to embody journalistic integrity, rigor, and hard reporting, whose mentorship meant everything not just to her but to the many who served alongside him?

All That You Leave Behind is a poignant coming-of-age story that offers a raw and honest glimpse into the multilayered relationship between a daughter and a father. Through this lens, Erin comes to understand her own workplace missteps, existential crises, and relationship fails. While daughter and father bond over their mutual addictions and challenges with sobriety, it is their powerful sense of work and family that comes to ultimately define them. This unique combination of Erin Lee Carr’s earnest prose and her father’s meaningful words offers a compelling listen that shows us what it means to be vulnerable and lost, supported and found. It is a window into love, with all of its fierceness and frustrations.

"Thank you, Erin, for this beautiful book. Now I am going to steal all of your father’s remarkable advice and tell my kids I thought of it." (Judd Apatow)

“Erin Lee Carr’s father, David, was an inimitable force in American journalism and a complex, boundlessly fascinating figure in her life. But what we learn in All That You Leave Behind is that Erin is just as much of an original as the man who raised her, and her sharp but tender-hearted debut memoir is perfect evidence of that. This book is wonderful.” (Lena Dunham)

“Erin Carr's personal story of finding her way with, and then without, her legendary poppa, the great journalist and mixer David Carr, is funny, touching, and entertaining. David was a wonderful, lively, involved dad, and he's still got something to teach us in these stories of their relationship, and in Erin's journey finding and creating a career in today's shifty media biz.” (Bob Odenkirk)

“Loved the father. Love the daughter. Love the book. How brave of Erin to tell her story of loss and found.” (Sheila Nevins, best-selling author of You Don’t Look Your Age...and Other Fairy Tales and former president of HBO Documentary Films)

What listeners say about All That You Leave Behind

Losing a parent is difficult, but losing a legend is devastating

This book spoke to me in a way that very few have. I also lost my father (Dr. Wayne Dyer)- an author, a speaker, a mentor and my true north. My father also struggled with addiction & recovery and I took that journey with him. From a very young age, we switched from a normal father daughter relationship to one of counselor, mentor and confidant - our roles often flip flopped, sometimes he was the mentors and sometimes I was the counselor. I miss our calls desperately. Erin’s words pierced my heart and I felt myself tense up as she struggled through that first year without the legend in it. Her honesty and vulnerability was heroic. Do yourself a favor and allow her to take you on her journey. You will be better for knowing her story. Erin and I were lucky to have such amazing fathers and when that amazing light goes out, the void is difficult to fill. I will watch Erin’s films with a new found appreciation and I will always be cheering for her success.

From one millennial to another

Brilliant and honest. This book touched my heart and soul in a way that is rare and comforting. Well done.

Uncompromisingly honest account of losing her beloved, accomplished father and finding her own voice and way. I inhaled it and loved every minute.

Loved everything about this beautiful, inspiring, and truthful book. Erin Carr is a force. I want to go back and write down all the lessons her brilliant dad bestowed unto her.

To be able to put all of those memories of her Dad into a beautiful and memorable book is breathtaking. Lost my Dad years ago and their teachings will always carry on--glad you were able to write it down

A powerful memoir that causes you to remember those you have lost the good and the bad, and reminds you of all the potential they have seen in you.

Having a relaitionship with a father is better than none. Especially if he's your hero and sometimes your nemesis. This story is captivating and intruding. It worms it's way into a space where one hasn't reconciled their own story or relationship with their father. It can heal but it can also tear you open. Be ready because it gets real.

Overall, this was a predictable, run-on sentence of a book of a self obsessed girl who relies too much on her father for everything. While there are moments of truth, and she dives into deeper issues like alcoholism and grief, Carr comes across as a spoiled, narcissistic millennial who squanders many opportunities and is more interested in name dropping celebrities than actually connecting with any real people. Some of her father's advice was inspirational and exciting to hear, but unfortunately it is like she never took it to heart. She's like a 13 year old brat with a better vocabulary. And why on earth did she narrate this herself? I can't but think that her entitled choppy way of speaking made this even more painful to listen to.

Loved her honesty & humility. So many life lessons tucked away inside! Got better and better....

Ok story if it relates to you. The reflection of a daughter going through the death of her father and the realization that she is an alcoholic.