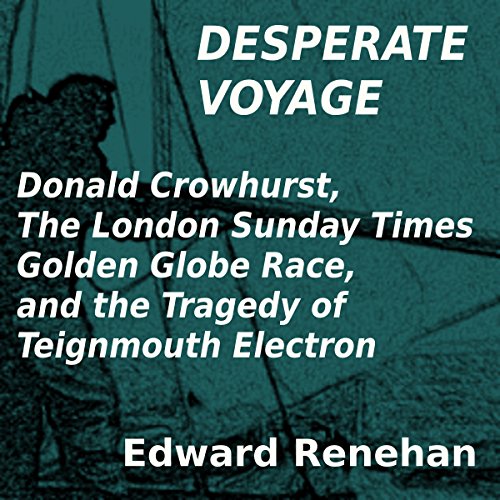 On a dismal day at the end of October, 1968, a weekend sailor by the name of Donald Crowhurst set out from England in a flimsy trimaran, hoping to win the London Sunday Times Golden Globe race and become the first solo sailor to circumnavigate the world nonstop. His was an exercise in over-arching ambition, delusion, and tragedy such as the world has seldom seen. Before it was over, the world media would be subject to a fraud of enormous proportions, and Crowhurst would die a madman in the middle of the Atlantic. What he left behind was a shattered boat, a shattered family, and this incredible story.

"I've been interested in the Crowhurst story for years. I'm old enough to remember the events unfolding as they happened. No one will ever know what really happened out there, but this book gives some previously undisclosed insights that leave little doubt. Desperate Voyage is a good read whether you know the story or not." (Neil Hawkesford, author of A Foolish Voyage: Self-Discovery at Sea)
"Ed Renehan's Desperate Voyage, the retelling of Donald Crowhurst's tragic voyage during the 1968/69 Golden Globe Race, is a finely honed account of what has become offshore sailing's most enduring story. Drawing on an array of sources, Renehan's Crowhurst is Shakespearean: narcissistic and reviled but also sympathetic, a flawed human consumed by ambition. Although I've known this story forever, Renehan's fresh, haunting narrative had me hoping for a new ending, a better outcome this time around. Alas, it's not to be. You just keep reading until it breaks your heart." (John Kretschmer, author of Sailing a Serious Ocean, At the Mercy of the Sea, Flirting with Mermaids, and Cape Horn to Starboard)

What listeners say about Desperate Voyage