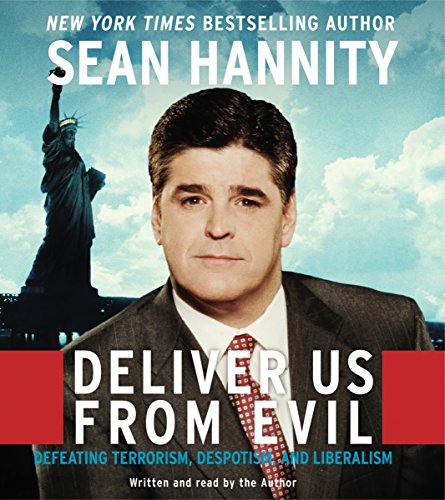 As Americans face the ongoing war against terrorists and their state sponsors around the world, Sean Hannity reminds us we must also cope with the continuing scourge of accommodation and cowardice at home. With his trademark blend of passion and hard-hitting commentary, he urges Americans to recognize the dangers of putting our faith in toothless "multilateralism" when the times call for decisive action. He believes that only through strong defense of our freedoms, at home and around the world, can we preserve America's security and liberty in the dangerous 21st century.

"Evil exists," Hannity believes. "It is real, and it means to harm us." Tracing a direct line from Adolf Hitler and Joseph Stalin through Saddam Hussein and Osama bin Laden, he reminds us of the courage and moral clarity of our great leaders. And he reveals how the disgraceful history of appeasement has reached forward from the days of Neville Chamberlain and Jimmy Carter to corrupt the unrepentant leftists of the modern Democratic Party, from Howard Dean and John Kerry to Bill and Hillary Clinton.

Hannity's first blockbuster book, the New York Times best seller Let Freedom Ring, cemented his place as the freshest and most compelling conservative voice in the country. As host of the phenomenally successful Hannity & Colmes and The Sean Hannity Show, Hannity has won a wildly devoted fan base. Now he brings his plainspoken, take-no-prisoners style to the continuing War on Terror abroad, and liberalism at home, in Deliver Us from Evil.

What listeners say about Deliver Us From Evil

Just the facts. Sean just lays out the facts in this book. There is suprisingly (for Sean Hannity) very little editorializing in this book. Sean builds a foundation of indesputable facts to show the connection between the religious left and certain leaders in the Democratic Party. It is obvious from many of the other review that they have never even scanned the book, let alone read it. Deliver Us From Evil is loaded with historical fact with a smattering of Sean's opinion.

This is a fine book and the only thing that would make it better would be to listen to it unabridged. Hannity has his finger on the pulse of what is happening in our world today. Very entertaining.

I have always been an open minded liberal in both fiscal and political areas. Sean has opened my eyes. As a liberal, I always felt there was something dishonest about liberal causes but knew they were the best approach for the underdog. Sean opened my eyes to the fact that liberalism creates the underdog with evil deeds done in the name of charity and peace. Well done Sean!

One's Political slant is obvious from the reviews.

In this book, Mr. Hannity makes a good case for many of the root causes for many of the problems facing both our Nation and our Society. Those who are willingly blind to them, or are participants in them will hate and villify this book. The book is cogent and carefully footnoted. From some of the reviews I can only conclude that the truth apparently does hurt.

Maybe the book has been out for a while but Audible just adds it to it's roster and there are already 50 reviews for this book? The average rating is 2.5 stars which probably means an even split between the extremists. This kind of soap boxing really makes (for political books anyway) the review section totally worthless.

Great book if you want to hear the truth about what is really going on--not what the liberal media wants you to believe. At 4 1/2 hours, it is not the type of book where the author wears you out so you forgot what he was saying--or not saying.

Can't wait for the next Hannity book!

Sean has delivered a book with clear vision of how to defeat terrorism and how we can win over liberalism.

Good read for the intellectually honest

Having read the hardcover version, I look forward to the audio version.
The thing I find humorous are all the reviews claiming to have started the book with "an open mind." Apparently, they were only open to the same liberal ideals that they've swallowed hook, line, and sinker. Sean doesn't equate liberalism with evil. He draws the parallel that liberalism can be defeated in the same manner evil has been defeated in the past - by standing up for what is right. It's easy to say that this book is "mindless drivel" and based on "lies upon lies" but never provide examples. Sean's book could be summed up by saying, Right is right, whether the rest of the "world" likes it or not.

The liberals just hate this one!

Great book! Even better that the first. Over 90 reviews so far. They love it or hate it and I am the latter! Sean is a master.

Deliver us from Evis

Good to see Audible.com making available conservative opinnion. Excellent listen and one all liberals should listen to. Even if they don't agree with Hannity, they will get an education on how those of us not brainwashed by the liberal media see things.