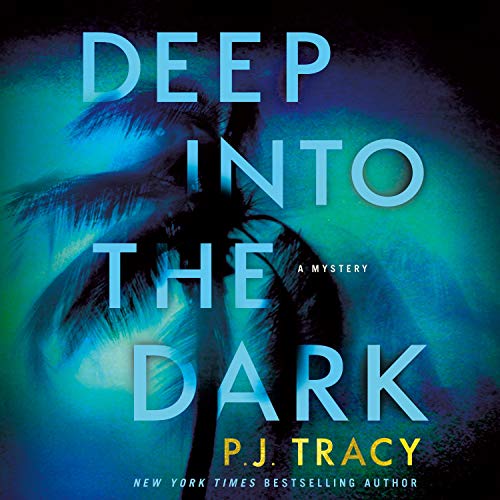 Deep into the Dark

Sam Easton - a true survivor - is home from Afghanistan, trying to rebuild a life in his hometown of LA. Separated from his wife, bartending and therapy sessions are what occupy his days and nights. When friend and colleague Melody Traeger is beaten by her boyfriend, she turns to Sam for help. When the boyfriend turns up dead the next day, a hard case like Sam is the perfect suspect.

But LAPD Detective Margaret Nolan, whose brother recently died serving overseas, is sympathetic to Sam's troubles, and can't quite see him as a killer. She's more interested in the secrets Melody might be keeping and the developments in another murder case on the other side of town.

Set in an LA where real people live and work - not the superficial LA of Beverly Hills or the gritty underbelly of the city - Deep into the Dark features two really engaging, dynamic main characters and explores the nature of obsession, revenge, and grief.

P. J. Tracy is known for her "fast, fresh, and funny" characters (Harlan Coben) and her "sizzling" plots (People); the Monkeewrench series was her first, set in Minneapolis and co-written with her mother. Now with Deep into the Dark she's on her own - and it's a home run.

What listeners say about Deep into the Dark

The characters are not likeable, nor are they developed. The story was 'okay' but I won't be bothering to buy any more by this author. There was no spark at all in this book, and I found it muddled and boring.

A huge disappointment after the Monkee Wrench books.

I also hated the narration, it was 'sultry, boring and soporific', she seemed to stuck the meaning out of the words! I would avoid her work in future.

It was entertaining even though the story was completely transparent so lacked suspense, I wouldn’t describe it as a thriller, but the narrator was very good. I would imagine this is the start of a new series let’s hope it goes on to be as entertaining as the Monkeewrench series.

I really enjoyed the Monkey Wrench series so was slightly apprehensive about a new series. However this makes a promising start. It was different to the other series but it made for good reading, and I'm looking forward to the next one.

I don't actually know how good the story is because I can't stand this narrator. I might be able to read it, but I can't listen to it.

I'm a definite Monkeewrench fan, but this is a whole nother can of tuna.
Just finished Deep.
I must say I was hesitant, but no longer.
Darker, yes.
Complex characters, yes.
Not at all Monkeewrench, but that's what makes it a success.
Brava !
Jump in and entertain your dark self.

Liked the book but not the preformamce

Ms. Craven has a sort of prissy, old fashioned intonation, which would work in other storylines, but not this one. I felt like Sam’s mother was narrating and found it very distracting.

That said, I am a fan of PJ. Tracy and really liked the story. Looking forward to what comes next.

slow to start but great second half