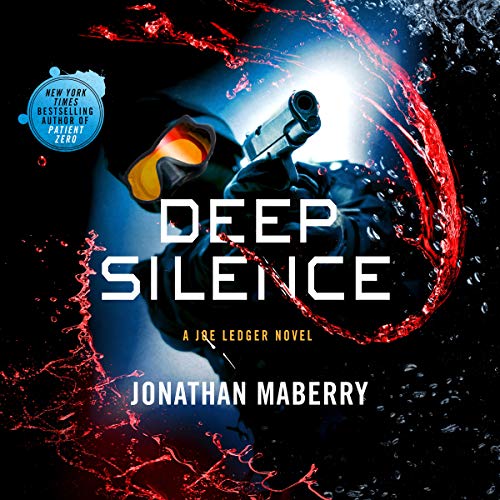 By: Jonathan Maberry
Narrated by: Ray Porter
Try for £0.00

Terrorists-for-hire have created a weapon that can induce earthquakes and cause dormant volcanoes to erupt. One terrifying side effect of the weapon is that prior to the devastation, the vibrations drive ordinary people to suicide and violence. A wave of madness begins sweeping the country beginning with a mass shooting in Congress.

Joe Ledger and his team go on a wild hunt to stop the terrorists and uncover the global superpower secretly funding them. At every step, the stakes increase as it becomes clear the endgame of this campaign of terror is igniting the Yellowstone caldera, the supervolcano that could destroy America.

What listeners say about Deep Silence

I love all Joe Ledger book... this ended great..but the first 50-60 chapters where drawn out and could have been 5-7 chapters. .. way too many interludes. but ray porter was amazing as always.

My favourite book series bar none and this one certainly didn't disappoint.

He moves the franchise on nicely, more so than any previous novel and it has a very pleasing conclusion.

You also get more character back story than usual, which opens many new doors.

Ray Porter simply Is Joe Ledger as always, so much so that I have banned myself from ever seeing a likeness of him.

Welcome to the war!
Such a great book in great series!
The only issuing bring it ends too soon.
I look forward to the next book!
Good hunting gentlemen.

He does it again

Jonathan Maberry never fails to deliver a great book. And Ray Porter is a fantastic narrator and perfect for Joe Ledger.

Bring on the new Chapter of the DMS

Continuing the story of the god machines, the latest adventure for Joe and the team is a nitrous-fuelled blockbuster movie that doesn't let up. An excellent series with great characters, political machinations, 7 foot lizards and more action than you can shake a stick at.

all ways a cracking read

Jonathan apparently hates our current president. unfortunately it seeps through into this book, poisoning the storyline. makes one wonder, how well does he understand his audience? how one can write about DMS and express disdain even to 2nd amendment? Jonathan, please turn off MSNBC for the next book effort.

Stay out of politics

Up till now the politicians have been generic but he clearly goes after the current administration, not a huge fan myself but enough is enough already. Not a bad book but will avail myself of Audibles awesome return policy. Keep it non party specific or wrap the series up.

I am really, really a HUGE Joe Ledger fan and this particular story had all the right elements. Once again Joe and company at the DMS have to uncover a plot to destroy most of the western world. This time, a version of the God Machine is wreaking havoc with a crippling impact. A really good yarn from start to finish with just the right delivery from Ray Porter who perfectly creates the voices for Joe Ledger, Mr. Church, and the rest. He especially captures the sarcasm of Joe to a tee.

Now, the downside. Mr. Maberry is obviously on the left side of the political view and it shows in his writing. As an independent thinker, I have no real issue with his views even when counter to my own. What I find objectionable is to label those on the right as bigots and idiots following the same approach as many in the media. There is a thinly veiled version of Donald Trump as POTUS who is a complete idiot. While I do not agree with all of Trump's views, he is far from an idiot and certainly would listen to logic when presented to him. With that out of the way, I really enjoyed the listen although through gritted teeth at times.

Looks like Jonathan M has let politics drive him a bit crazy as he suffuses this one with political messaging that detracts from the story.
It’s a shame... usually enjoy these for the cheesy fun that they are

Well Well just when you think you e seen it all..

from the DMS you have 😎 but fear not our hero’s are g going anywhere just yet. Fantastic book. You’d think plot lines would start to get stale and character development would lose momentum. You’d be wrong. How Jonathan keeps us on the edge of our seat book after book is beyond my tiny mind. Long live the Maberry/Porter combo. I’ll buy that ticket to ride every single time.

Could do without the lecture

Could do without the lecture on the politics. Its just sooooo tiresome, predictable and about ruins end of the story. I hope he's gotten it out of his system.

A team of monkeys and the Fonz

Up until now, I have always enjoyed the Joe Ledger series excellent storyline, creative takes on near-plausible science, and the uniqueness each book has brought while also tying into the overall storyboard. This book, however, I am certain was written by a team of interns who each read a single book in the series and decided to expand on a previous plot, but in a way that it becomes just ridiculous to the point of jumping the shark. The book never feels like it's being pulled together into a cohesive plotline or 'point' that it's trying to get to, Lastly, in previous books, the psychological horror was tastefully on the edge; in this book, it is graphically obscene. It almost felt like whoever wrote some of the passages simply wanted to see what they could get away with.

The book's 'voice' doesn't feel like Maberry's writing; it feels more like the last copout where the book was an amalgam of stories that Mayberry had other writers do. If the Joe Ledger storyline has been exhausted, please just put it to bed and spare us from this spiral of deteriorating quality.

What starts as a traditional story about “Ma Ledger’s favorite son” with all the fun-loving jokes and action; takes a turn about halfway through. The downward spiral starts with a small sprinkling of current-events political commentary and drops completely into characters making stump speeches by the end.

Ray Porter delivers on the characters as well as ever. The story however had to be the only real disappointment in the series, as of yet. They've been getting wilder and wilder for years now. However, this one missed the mark thoroughly. None of the action felt the same. The combat was lazy and sparse. I didn't feel invested in the stakes of the story, because maybe it was too big. It started well enough, but by the time the President storyline and Russian hacking and interference was introduced, the entire experience of the book was reduced to a grind. It plays on misrepresented current events and effectively manages to make me roll my eyes every few minutes. The end game of the book is also a considerable let down, and I'm hesitant to continue to read the series after whatever the new tale is released. I don't see it coming back from this. Mayberry hasn't written a book I didn't absolutely enjoy until this one. I think the Joe Ledger saga is ready to be laid to rest.

Unfortunately not as great as the others. A bit slow to action as the others seem to be. But the characters continue to be awesome & we’re getting more of their history & beliefs which adds so much to a JL ride.
I was annoyed by the way current politics (POTUS) infected it- distracted from the story, sad. Personally I use books to get away from it.