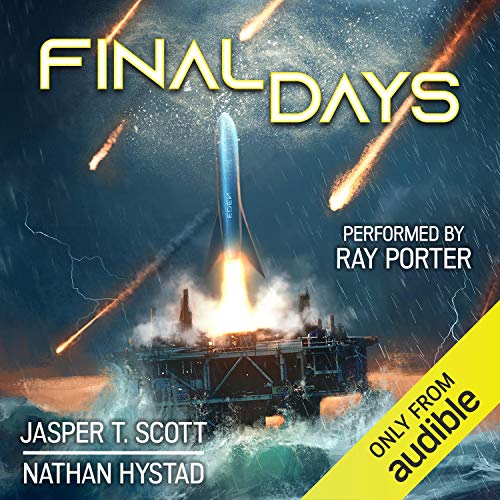 The countdown to the end of the world has begun.

A mysterious convergence of natural disasters threatens to destroy life as we know it, and people across the United States are going missing. With no one left to investigate, Special Agent Kendra Baker takes the case, trying to solve the disappearances before she’s out of time.

Among those abducted is Valeria Miller, the daughter of ex-Marine Corporal Andrew Miller, and he’ll stop at nothing to find her.

With the help of an unstable conspiracy theorist, they find themselves on the trail of a reclusive billionaire who just might have all the answers.

As the natural catastrophes escalate and the evacuations commence, it becomes a race against the clock to find the abductees before it’s too late.

What listeners say about Final Days

Great story that is thought provoking - builds up with the background story and characters coming together. Looking forward to the next instalment. Thanks to Nathan and Jasper for an enjoyable book

I was hoping for good things from this book – an exciting premise, many positive reviews and read by the inimitable Ray Porter. Unfortunately, it just does not deliver. The plot is paper thin, entirely predictable and without a single twist. Despite the fate of humanity being at stake, there is little genuine sense of tension or jeopardy. It seems that the authors have regurgitated pretty much every eye-rollingly dire cliché from the disaster genre template or James Bond; Billionaire entrepreneur builds sanctuary (called ‘Eden’ of course) to protect the genetic cream of the human race, ex-marine (replete with PTSD and drinking problem) in race to find kidnapped daughter…you get the picture. The characters are so one-dimensional, I found myself caring little for their plight and ended up rooting for the apocalypse. It also did not stack up as a complete book in its own right, and just serves as an introduction to the series. What could have been a potential surprise, is completely given away by the cover of the book! Unfortunately, even Ray Porter cannot elevate this yarn and I won’t be hanging along for the ride…

It was ok, but not enough to make me want to listen to the next in the series.

A good start to a series

The book was easy to follow and well paced. I enjoyed it even if one of the meet-ups between the small cast of protagonists seemed to be more than a little far fetched. Usual fantastic end of the world scenario that sometimes seems a little close to the bone, how they cover the greed and breakup of communities and the breakdown of law and order. I very much enjoyed the Marine character. I just wish the FBI agent had more spine, seemed to be a bit panicky at time. I appreciate that we don't want a cast of terminator like people. But with the training and selection process that the FBI uses and experience that an agent of her years in the field would have - I'd like to think that they would have a little more steel to their attitude.

Ray Porter did his usual fantastic narration. I listened to this probably too soon after listening to all 3 of the rise series back to back that a couple of the voices were rather close, but if that's the only thing I can say I guess that he's done a darn decent job.

Wow this is a great apocalyptic thriller that has action suspense and intrigue in abundance, Nathan and Jasper’s writing allows you to care for the characters so that you are rooting for them to overcome the adversity they encounter and still want more.

Ray Porter’s narration is as usual great and he provides a depth to the characters that only adds to the storyline.

I cannot wait to listen to the next in the series, we’ll done to you both on such a great book.

What a fabulous listen! This was a superb story, with action and intrigue, and an amazing ending! Highly recommend and will be onto book two now

I read the book before listening to the Audible version. I'm glad I did, and I wanted to listen to the book because I wanted to hear how Ray Porter, a narrator I am very fond of, brought it to life. Hystad and Scott do not disappoint with the story, and Ray Porter does a masterful job bringing this to life. Ray has some incredible voice intonations and inflections, and you can practically HEAR the characters shrugging, smiling, and etc. with his outstanding narration.

Even though I had recently read the book, I found that the audiobook was just as gripping, exciting, and entertaining as the written version. Maybe more. I listen to books mostly while I am taking my daily hike, which is typically about a three mile stint in the hills of Tennessee, so it is a HIKE. Final Days was so absorbing that I would find myself having climbed Heartbreak Hill and not even been aware of it I was so engrossed in the story. Even knowing the exciting and slightly cliff-hanging conclusion I was still enthralled. I picked up on details I had missed in the written book.

Nathan Hystad's great skill is in bringing characters to life, and painting pictures with words that actually bring you into the story and into the action. You feel what the characters feel, you see what they see, you relate intimately to their thoughts and feelings. Jasper Scott's epic story-telling ability is outstanding, and this mashup definitely works.

Usually, I have 3 tests that dictate whether or not a book will get top marks from me: Did I enjoy it, and did it take me along on the journey and provide lots of entertainment and escape? Next, Would I recommend it to others? Was the book well executed with no or few errors, typos, language, and grammar issues? And third, would I want to read or listen to the next book(s) in the series?

The answer to those questions is a resounding YES for Final Days, this first installment in the Final Days saga. I am also certain that I will listen to more from this outstanding author dynamic duo. They are that good.

I am a very hard man to impress, as those of you who read and follow my critiques and reviews know. I have high, perfectionist standards and a critical ear as an author myself, as a highly educated former English major and editor. So I don't hand out 5-star reviews lightly. If it sucks and should be completely overhauled for the next version (or scrapped), I am not shy about telling an author or readers that. Fortunately, this audiobook ticks all the boxes. Actually I was surprised to hear a few (literally 2 or 3) incorrect pronouns or names of characters in the narration, but they did not prevent any understanding, and I noticed them mostly because I was so startled to hear them. Most people will likely miss them.

If you are a lover of these authors, or narrator Ray Porter, and near future sci-fi stories that are fast-paced and driving, I recommend this audiobook without reservation.

Even my wife, a non-sci-fi fan, loved the book and the twists. It kept us enthralled through the whole book. We got to the end and are hooked, we need the next one guys! Keep them coming!

Very entertaining through out the escrow book. The huge suspension over coming impossible odds was not a reoccurring theme like you see a lot recently and that was refreshing. Will certainly get the next two books when released

The book leads up to the event, reading as a mystery following the disappearance of people. With different natural disasters going on all the while two people are trying to discover the missing. Eventually you figure out why the people are missing, but I must say it is an interesting lead up to the apocalypse. Yet I’m not sure where the ending leads the next in the series and if it’s something I’d be interested in. But all in all it held me into every chapter.

This book was gifted to me from a friend. they thought I would like it because I enjoy the Expeditionary Force series. I had some trepidation when I saw that it had few reviews and was already a few months old.
I am happy to report that my friend was 100% correct! this is a great book with a wonderful story line and character development.
I am looking forward to the next two books in the series.
Dont hesitate to get this book, you will not regret it!

Mystery Wrapped in an Apocalypse

As always, Ray Porter is a phenom. His performance alone can make a book. Fortunately this story is great and the narration is just a bonus.
A mystery/end of the world story, with interesting characters and a plot that moves at a good pace.

I was left wanting more and can't wait to start the next book. I'm an avid sci-fi/fantasy reader and was super surprised and pleased by how much I liked this book.

I'm excited for more story and character development in the next installment!

Hystad and Scott are Gifted, Porter is Masterful

Loved the characters! Loved the action and the suspense. The countdown, chapter by chapter was a really nice touch. I couldn't stop listening.

I love these two authors they never disappoint me. Awsome story from beginning to end. Alot of stories have a ton of filler that last 10 chapters while this one has great storyline from the 1st, 6th 13th etc. Of course the ending was top notch with a helluva twist and definitely makes you ready to buy the next in the series. These guys ha e now become my favorite science fiction authors!

Damn Hooked on Another Series

Grabs you from the start. the action is nonstop. a refreshing hybrid of the mystery and science fi genre