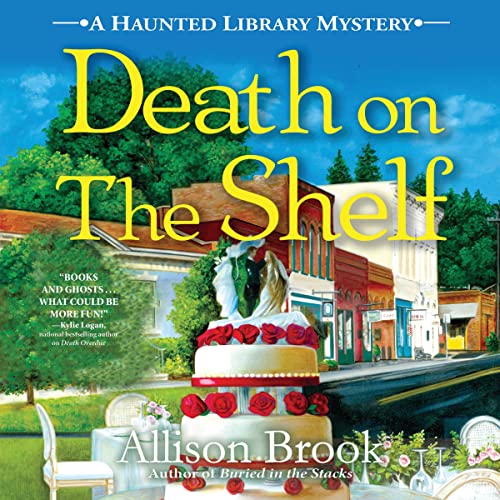 Death on the Shelf

By: Allison Brook
Narrated by: Mia Gaskin
Try for £0.00

Clover Ridge librarian Carrie Singleton is thrilled to attend her best friend Angela's wedding, but Angela's family can be a bit...much. Angela’s wealthy cousin Donna hosts an extravagant bridal shower at her resplendent home, but the celebrations turn to gossip as the guests notice Donna's surgeon husband, Aiden, spending a bit too much time with Donna’s cousin Roxy. At the wedding reception, the sweet occasion turns darkly bitter when Aiden topples into the chocolate fountain - dead.

The suspect list is as long as the guest list, and as difficult to sort out as the seating chart. A few of the top contenders on Carrie’s suspect list are the flirtatious Roxy, emotionally unstable since her recent divorce; Angela's grouchy brother, who feels Aiden betrayed him; and Roxy's scorned ex-husband. Even Donna may have had reason to want her husband dead. And Aiden's gossipy office manager has plenty to say about them all.

Then another member of Angela's family is murdered, making Carrie more determined than ever to find the killer. Can library ghost Evelyn and library cat Smoky Joe help Carrie solve the murders before she becomes the next of Angela’s wedding guests to head to the grave?

What listeners say about Death on the Shelf

I love listening to Allison Brook she is a wonderful author. Chan wait to hear the next book.

Great story and loved the ending

I was looking forward to read this book for many months and the author didn't disappoint me. I love all the books from this collection!

Love all of the haunted library mystery series but I find Evelyn the ghost low key annoying, usually she’s not but she was rude and super pushy in this book.

Paranormal? Not so much.

Just completed listening to this 5th in The Haunted Library Mystery series by Allison Brook; Narrated by Nia Gaskin in about a month. For some reason, I find Carrie Singleton's wacky personality easy to digest. Evelyn's ghostly presence is neither fearful, evil, nor eerie as I would expect in paranormal activities. Enjoyable reading.

I can’t wait to see where Carries going, and excited for her and Dylan. Such great likable characters, good mystery, and relatable storylines. Enjoyed it and highly recommend this entire series!! Keep them coming!! Also please never change narrators this one really brings the characters to life!!