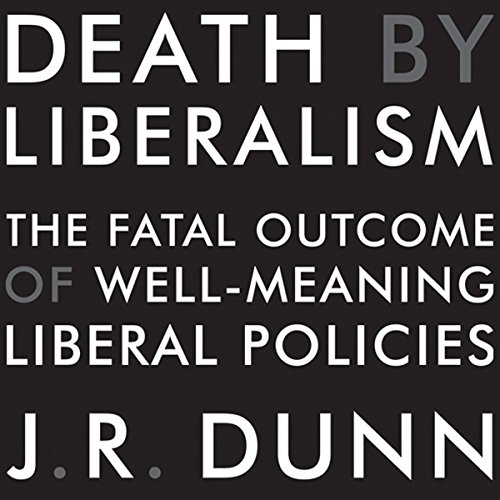 More Americans have been killed by well-meaning liberal policies than by all the wars of the last century combined. J. R. Dunn not only analyzes the unintended consequences of liberal policies, but argues that these consequences have resulted in millions of fatalities in the United States and around the world.

Liberalism sees itself as a rational and helpful philosophy that seeks to use the benign power of the government to improve our safety, health, and general welfare. In doing so, it relies on the authority of experts to devise the most rational means of realizing these goals. Unfortunately, when these well-meaning plans go awry, as they too often do, the results can be disastrous, even deadly.

As J. R. Dunn persuasively argues in this thoroughly documented book, death by liberalism occurs in all fields and at all levels of society. Motorists, workers, even children taken under the state's protection all have fallen victim to liberal policies. What's more, the numbers are staggering. Liberalism can be implicated in the deaths of hundreds of thousands in this country, and millions worldwide.

Dunn's detailed and deliberative account takes no cheap shots but relies on well-established facts to show liberalism's fatal consequences in numerous aspects of our lives, from crime and abortion to fuel-efficiency standards and the banning of DDT, from gun control to urban renewal. Dunn also pinpoints areas in which liberal interventions in the making are likely to produce more suffering and death, such as legal euthanasia, and identifies some of the leading liberals - including George Soros - behind the spread of these lethal initiatives.

What listeners say about Death by Liberalism

Being a liberal is "standing on your head and telling the world it's upside down". This book describes the liberal insanity very well, if you listen to this audio book and don't get angry then you have no soul and are a liberal.

It was refreshing to hear some of the information that is presented in this book, but it is heavy on facts and information, and the reader is very dry. I could only make it through the first couple of hours. A *.pdf download of information and stats would have been more helpful. Since I drive while I listen to books, I could not listen much longer...I was fighting sleep every time I listened to this book.

BTW, I am a former liberal, who is conservative, mainly because of all the unintended consequences that this book is speaking about.