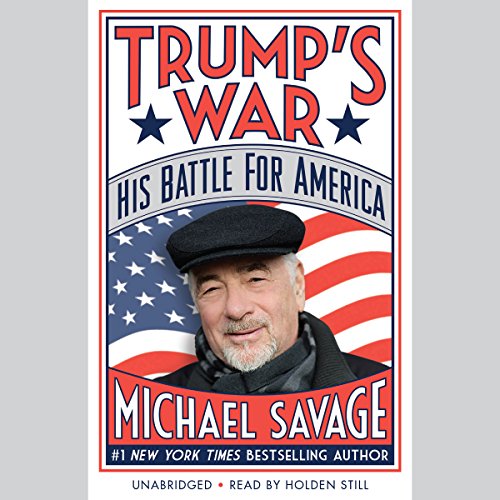 His Battle for America
By: Michael Savage
Narrated by: Holden Still
Length: 6 hrs and 48 mins
Categories: Non-fiction, Politics
5 out of 5 stars 5.0 (5 ratings)

The "Godfather of Trumpmania", Michael Savage, examines the initial appointments, speeches, tweets, and history of Donald Trump and offers his insights and analysis. The man many consider to be the determining factor in driving Trump over the finish line by motivating millions of undecideds and the "Deplorables", who would have otherwise sat out the election, provides a crucial first look at the early direction of the Trump presidency.

Savage has waged a 25-year war on the radio to save America's borders, language, and culture from a progressive onslaught that is already turning Europe into a socialist, multiculturalist nightmare, where violent gangs of radical Islamic refugees terrorize defenseless citizens on a daily basis.

While most in the chattering classes around the world dismissed Trump's campaign, conservative radio icon Dr. Michael Savage championed Trump's platform and helped him galvanize the support of disaffected middle Americans left behind by the globalist central planners in their distant capitol.

Savage's army of listeners on The Savage Nation was instrumental in electing Donald Trump to take the fight to Washington. But electoral victory was only the beginning. Trump now has an even bigger challenge in delivering on the promises he made to millions of American voters. He faces relentless opposition from special interests in both parties who stand to lose trillions if Trump's America First policies become the law of the land.

Dr. Michael Savage has been on the front line of this fight for decades and knows what Trump and his administration are up against. He lays out a path to victory for the new, conservative American revolutionaries in Trump's War.

loved it, must read great well together research presented by Dr Michael Savage. A must read for all including bleeding heart liberals.

Great insight from a legendary broadcaster.

Great insight from a legendary broadcaster, Savage understands and clearly outlines the Pros and Cons of a Trump alongside the battle Trump faces to save America. Let Savage back into the UK, not that he'd ever want to come back to our shores, with the political mess the UK finds its self in.

A pleasant change from the lies spewed out from TV, Radio and Newspapers these days.

TRUMP'S WAR was really good. Would have been better if Michael Savage had narrated it himself.

Another classic by Savage

I only wish Michael Savage had narrated it himself, but Holden Still did a fine job.

excellent insight to Donald Trump and some of the issues with the United States Government.

Should be required reading in High School

Loved it. I'll have my kids read it, listen to it. What a lesson for us. Dr. Savage knows his history, sciences and understands the secret combinations that seek to overthrow our freedoms. Not loyal to any party, but to our freedoms. Get it.

Michael Savage provides a unique perspective for the current political climate. Worth the read no matter what your opinion us of Donald Trump.

Get it and read it. The best researched book I've read bar none. You want regret it.

Enjoyed listing . Time travels while driving .
I like his point of view. Good

Michael Savage is one of or perhaps the only sane person in the media today! His insights are spot on.

This is a great book, read very well. loved it.

They story well we'll written. it was also read very well. I kept forgetting it wasn't the author reading. the narrator was very professional.