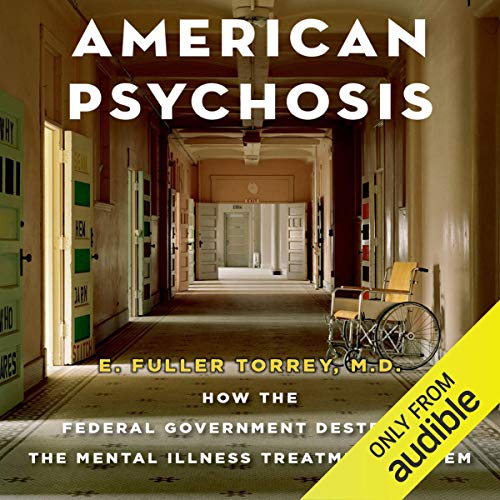 By: E. Fuller Torrey
Narrated by: Stephen McLaughlin
Try for £0.00

In 1963, President John F. Kennedy delivered an historic speech on mental illness and retardation. He described sweeping new programs to replace "the shabby treatment of the many millions of the mentally disabled in custodial institutions" with treatment in community mental health centers. This movement, later referred to as "deinstitutionalization," continues to impact mental health care. Though he never publicly acknowledged it, the program was a tribute to Kennedy's sister Rosemary, who was born mildly retarded and developed a schizophrenia-like illness. Terrified she'd become pregnant, Joseph Kennedy arranged for his daughter to receive a lobotomy, which was a disaster and left her severely retarded.

Fifty years after Kennedy's speech, E. Fuller Torrey's audiobook provides an inside perspective on the birth of the federal mental health program. On staff at the National Institute of Mental Health when the program was being developed and implemented, Torrey draws on his own first-hand account of the creation and launch of the program, extensive research, one-on-one interviews with people involved, and recently unearthed audiotapes of interviews with major figures involved in the legislation. As such, this book provides historical material previously unavailable to the public.

Many now wonder why public mental illness services are so ineffective. At least one-third of the homeless are seriously mentally ill, jails and prisons are grossly overcrowded, largely because the seriously mentally ill constitute 20 percent of prisoners, and public facilities are overrun by untreated individuals. As Torrey argues, it is imperative to understand how we got here in order to move forward towards providing better care for the most vulnerable.

What listeners say about American Psychosis

What made the experience of listening to American Psychosis the most enjoyable?

This audiobook starts pretty slow, but the historical preamble sets the stage for the more-concise facts that start pouring in during the 2nd half.

The topic of mental health, de-institutionalization, lack of accountability, and for-profit "solutions" are highly relevant. Just walk in the city and you'll encounter the consequences when you pass the homeless people muttering to themselves. And that's only the portion that are not incarcerated or in for-profit nursing homes (which should be used for the elderly).

Honestly took me a while to get used to, but the story makes up for it.

If you could give American Psychosis a new subtitle, what would it be?

In this book, the shutting down of State mental hospitals was based on ideology around society and mental health that sounded good but parts of it were simply not backed by scientific evidence (which admittedly was sparse during that time since psychiatry was still in its infancy). The movement had no chance of evolving during the Nixon/Reagen era: they not only supported privatization, they were hostile to psychiatry!

The narration is quite poor.

I mean, maybe this is a good book, but it's not a good audiobook. The narration is halting and unprofessional. Narrators often over-act, which is irritating, but here there is no intonation at all. Couldn't make myself listen through it.

now I know how much I didn't know about the topic

I heard this book recommended by dr. Drew on a periscope with Scott Adams. I purchased it that same day and have been making my way through the audible book as I drive here and there doing my job. I was unconsciously incompetent on the topic. I did not know how much I did not know. Now I am consciously and confident. At least I know how much more there is that I should educate myself on regarding this topic. I cannot thank the author's enough.

The book details the reason that mental healthcare in America is so dismal. This is a major reason for high costs for such poor return on healthcare dollars and it affects so many things like the acts of violence committed by some of the most seriously mentally ill. The world we live in is a dystopic future brought on in part by decisions made regarding the care of the mentally ill in this country and the ongoing poor utilization of our resources.

Loved this book. I learned a great deal. I believe every civic leader and Healthcare professional dealing with those struggling with mental illness must read this book.

I work as a tour guide at the old trans Allegheny lunatic asylum in Weston wv. I loved this book and found it very interesting and educational.

An exhaustive lesson in bureaucratic blunder!

What did you love best about American Psychosis?

An honest inside view of an enormously fractured social service institution! The picture could not be made any clearer!

What was one of the most memorable moments of American Psychosis?

The depiction of the suffering endured by so many mental health patients.

The portrayal of Joe Kennedy's struggle for acceptance by the societal elite and the effect his deep seeded insecurity had on his decisions.

Yes! I am now on my second listening and intend to engage for a third to assure I have grasped as much as possible!

The burden of knowing this truth is a weight that will change the reader. Hopefully, for their betterment. American Psychosis should be mandatory reading for all public servants in all levels of public service. A tremendously comprehensive study of an ailing nation that seemingly has lost it's incentive to seek effective treatment. The beginning of healing is the knowledge of it's need! Here in AMERICAN PSYCHOSIS that need is clearly spelled out!

This offers a fascinating journey through the history of U.S. treatment of Serious Mental Illness since the early 1950’s, the problems facing the US today and possible solutions for treatment, homelessness, imprisonment, and community centers that have been ineffective. The author brings up some important considerations and I think it’s something that many more people need to take the time to better understand.

Although the book is very educational, I find it intriguing. However, the narration is slow and monotone. I could barely tell where one sentence ended and another began. Otherwise, I am very fond of the book.

I didn't even want to listen to it between stop lights while driving. Very slow and monotone narration. I found myself having to concentrate just to understand the point made with each sentence.

Good Overview of the Issue

As someone who has worked been in and out of the mental health system over several decades, I was interested in what a medical professional had to say on the issue of US mental health policy. What the book does well is give a researched account of 65 years of mismanaged mental health systems happened in the US; from state run institutions to the inept federal reform, to the current system that has placed the mentally ill into boarding homes, nursing homes, and the streets. It also discusses how the topic of mental illness has become mandated instruction to law enforcement and prisons. It's a tragic story and I think one that really explains why people are reticent to reach out for help- because you are reaching out to an ill equipped system.

However, there is a bit of bias exhibited by the author as at times he seems uninterested in viewing the mentally ill as people, with rights, dignity, and free will. This comes off as dehumanizing and devaluing. I agree that there is a portion of the mentally ill who truly have nowhere to turn to, who cannot care for themselves, are a danger to themselves or others, and really need involuntary help but that is not everyone with a mental illness.