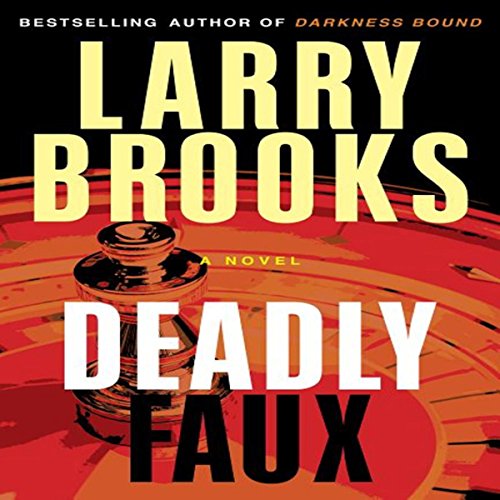 Set in the gritty allure of a Las Vegas casino, Deadly Faux is an unstoppable thriller of deceit and seduction.

Wolfgang Schmitt, ex-underwear model, self-proclaimed wisecrack, and cynical copywriter turned undercover agent, is biding his time, unsure how to spend the millions he scored after his recent undercover mission for the FBI. Complicating matters is the fact that he might be called in for a new mission; if it's off the books and calls for a touch of seduction, Wolf is the man for the job.

But, in Wolf's words, shit-storms come in threes. On the same day Wolf is visiting his mother in a nursing home, he makes three troubling discoveries: the place is going under and he may need to step in; the stash in his offshore account has completely vanished; and the promising new woman in his life is actually a Fed, vetting him for another undercover gig. His mission: To entrap a casino-owning couple suspected of involvement with the organized crime factions piping untold amounts of money through the gambling mecca's glamorous underworld. All of this seems nearly impossible to pull off, probably illegal as hell, and if this is anything like his last gig, nothing is as it seems.

Full of crime, passion, and betrayal, Deadly Faux finds Wolf cornered in a dangerous undercover mission in Sin City, forced to use his wits, charm, and gambler's luck to survive in the dark underbelly of Las Vegas.

A FANTASTIC thriller: VEGAS, THE MOB AND MURDER!

This is the first Brooks book I have bought, and was one of the best downloads I've chosen in ages. A great murder mystery set in Vegas, with the MOB, FBI, a femme fatale, and a wise cracking under-cover hero. This is Chandler-style plotting and characters with brooks well paced prose. Very addictable, if you like American noire, then Brooks can be added to the list including Michael Connelly and Lawrence Block.

The rest are on my Wish List, along with the first in the series.