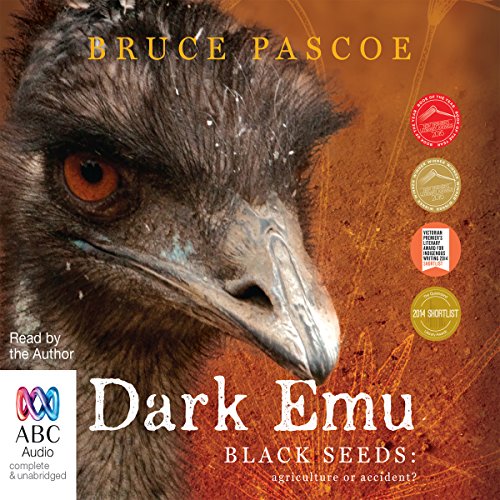 What you thought you knew about pre-colonial Aboriginal Australia is wrong. Learn the true history of Australia’s first people in Dark Emu. Author Bruce Pascoe lays out the compelling case that Aboriginal culture was far more rich and advanced than we’ve been led to believe, crafting a work that has won two NSW Premier’s Literary Awards, Book of the Year and the Indigenous Writers’ Prize.

Drawing from accounts from some of the first settlers to arrive in Australia, including Charles Sturt and Thomas Mitchell, Pascoe shares evidence of advanced agriculture, engineering and architecture that challenges the fraught concept of Terra Nullius. One of Australia’s most esteemed writers and an advocate for Australia’s Aboriginal people, Pascoe narrates his own work with heart, honesty and expertise.

Dark Emu argues for a reconsideration of the 'hunter-gatherer' tag for pre-colonial Aboriginal Australians and attempts to rebut the colonial myths that have worked to justify dispossession. Accomplished author Bruce Pascoe provides compelling evidence from the diaries of early explorers that suggests that systems of food production and land management have been blatantly understated in modern retellings of early Aboriginal history, and that a new look at Australia's past is required.

What listeners say about Dark Emu

I was so ignorant about indigenous Australia

I loved this booked, I finished it with mixed feelings of sadness for what has been taken from the real owners of the land, for the lies that have been told. But it gives me peace that more people like me who wasn't even born in this beautiful nation have now a better understanding of the real history and about the great achievements by indigenous Australians.
I thank the author of this book for helping me finding light into this beautiful, interesting book and I'll share this information with everyone to defend what should be told as the truth!

should be in the school curriculum, calmly unpacks some very important issues in a convincing and thoughtful manner

This should be compulsory reading for every child (& adult) in Australia.

Massive respect for our indigenous people! This is so wonderful to get this information out there. We need to be learning more from, and consulting with, our country’s traditional custodians.

Who knew.. and why weren’t we taught this during our school years?!

Well done Bruce Pascoe. I’m sharing this as much as I possibly can.

A truly fantastic audiobook narrated by the author Bruce Pascoe. I think I put even more value to his words as he was the one reading them and emphasizing as he would normally in conversation. He made it a pleasure to listen to.

The numerous examples of indigenous peoples farming the land was so refreshing to hear. FINALLY the truth is coming forward and I look forward to our shared history being reframed.

Whilst I loved the book, the reality is I came to tears on a number of occasions. To hear through the writings of those first settlers who gave such little value to our ways, how blinkered they were to our intimate knowledge of the land and how they systematically destroyed every opportunity to allow our peoples the right to care for boodja (country) is absolutely heartbreaking. I must admit I feel agrieved. I am going to need some time to process my initial reaction so I can channel that energy into helping to make a difference.

An immensely valuable contribution to the conversation

Thank you for reinforcing my respect for indigenous Australians and for expanding my knowledge on how our landscape has come to be.

A History I never Learned

I’ve grown up loving history, recent events inspired me to learn about our own, Australian Indigenous History.

Information in this book is exciting, captivating and something I will be sharing with people in my life

This is a eye-opening and mind-expanding history of Australia. It's exhilarating to learn vital new insights into Aboriginal society and technology, heart-breaking to realise how much has been lost and inspiring to consider what a future Australia could look like once we embrace and honour this history and wisdom. Essential reading or listening for every Australian. It's great to have the author reading it too, which is not always the case with audiobooks.

Provides an expanded of human history and future. The past is not what is taught in schools.

This books reveals what has been invisible and asks us to consider who ‘the story’ serves. I hope I live to see this kind of thinking integrated into the Australian consciousness. I am humbled by my own ignorance.

Essential listening for every Australian teenage upwards. If we can change we should . A timely reminder that it is not too late.

A tectonic shift in anthropology. Reveals knowedge of human history and development that should be known by all peoples of the world.

Another example of our commonly known history being false. This wonderful book goes someway in correcting that criminal fact.