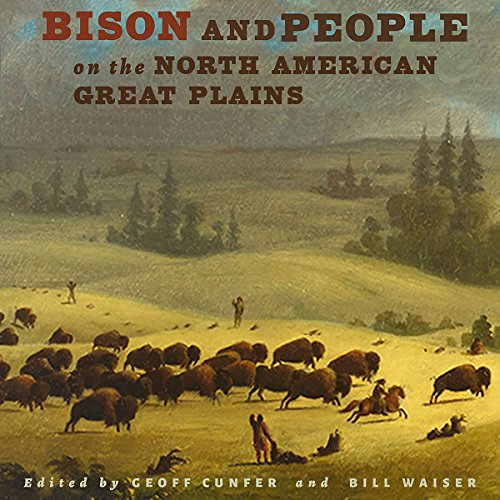 Bison and People on the North American Great Plains

The near disappearance of the American bison in the 19th century, is commonly understood to be the result of over-hunting, capitalist greed, and all but genocidal military policy. This interpretation remains seductive because of its simplicity; there are villains and victims in this familiar cautionary tale of the American frontier. But as this volume of groundbreaking scholarship shows, the story of the bison's demise is actually quite nuanced.

Bison and People on the North American Great Plains, brings together voices from several disciplines, to offer new insights on the relationship between humans and animals that approached extinction. Contributors include historians, archaeologists, anthropologists, paleontologists, and Native American perspectives.

This audiobook explores the deep past and examines the latest knowledge on bison anatomy and physiology, how bison responded to climate change (especially drought), and early bison hunters and pre-contact trade. It also focuses on the era of European contact, in particular the arrival of the horse, and some of the first known instances of over-hunting. By the 19th century, bison reached a "tipping point" as a result of new tanning practices, an early attempt at protective legislation, and ventures to introducing cattle as a replacement stock. Bison and People on the North American Great Plains, is a major contribution to environmental history, western history, and the growing field of transnational history.

The audiobook is published by Texas A&M University Press.

This book was sparked from an academic conference held on the American Buffalo. Conference members wrote the chapters. They point out that the history of North American bison was re-thought by scholars in the 1990s. The public, however, still believes the animal’s near extinction was government policy to subdue Indians, a 19th century fad for buffalo robes, and shooting parties from the East killing them from trains for fun. No so, write the professors. In the first place there were never more than 24-29 million animals on the plains—a great number, but not the 60 million or more that is often stated. Weather fluctuations meant some years there were less animals than others. The scholars’ number comes from computing how much graze bison need, the size of the great plains, and the time required to re-grow grass and sedges; 29 million is the maximum number possible. Contrary to popular myth, pre-Columbian Indians killed more bison than they needed each year by running them off cliffs or into corrals in canyons. Archeologists find butchered and un-butchered skeletons at these sites. The animals absorbed such wastage until Indians began hunting them from horseback, in full swing by 1700. Pregnant cows were the main target as they were fattest and sweetest, and this decreased herd numbers. Plains Indians wanted manufactured goods—steel knives, rifles, gunpowder, cloth, blankets, beads, etc. The extra slaughtered buffalo were converted into goods exchanged with merchant traders. Horse mobility coaxed more Indians onto the plains—it’s why Sioux and Cheyenne settled there from the East—all with families to feed and large horse herds that ate the buffalo’s grass. Inevitably, the enormous mass of animals shrank. Indians normally hunted them twice a year, in late fall and again in late Winter. Then in 1821 Canadian mixed-blood Metis moved onto the plains in high summer, with killing parties of several hundred coming every year for decades, manufacturing thousands of pounds of pemmican out of the buffalo for sale to the Hudson Bay Company in Canada, pulling heavy wagons to transport the pemmican back home. There was a terrible draught in the 1840s that reduced the herd still further. By the 1850s Indians noted the buffalo were less plentiful then before. By the 1860s herds had to be searched for. Complete collapse came in the 1870s with some 5,000 market hunters administering the coup de grace. There was never a government policy to wipe buffalo out that any historian has ever unearthed from records—it was buffalo hunters who stated there was to save face. Their market hunting was a business opportunity fueled by a large quantity of cheap raw material that lasted only a handful of years, until the raw material—the buffalo—disappeared. The truth is, according to the book, everybody exploited American bison by killing it. The intensity of harvesting just couldn’t be sustained. That, in the nutshell, is the book.

This is an interesting read/listen that takes into consideration climate, vegetation, bison habits, Great Plains topography, accounts from trustworthy eye-witnesses, and historical records of bison numbers and supplies kept meticulously by the Hudson Bay Company. It is narrated too fast. Slow it down to 75% on your playback device or you’ll miss a lot of information. For persons interested in this era it is well worth the listen.