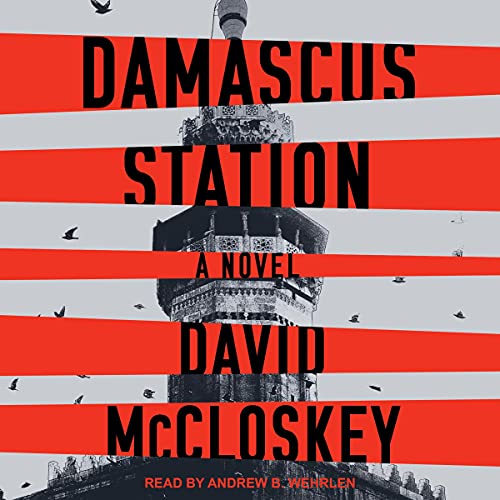 By: David McCloskey
Narrated by: Andrew B. Wehrlen
Try for £0.00

A CIA officer and his recruit arrive in war-ravaged Damascus to hunt for a killer in this pause resister that offers the "most authentic depiction of modern-day tradecraft in print" (Navy SEAL sniper and New York Times best-selling author Jack Carr).

CIA Case Officer Sam Joseph is dispatched to Paris to recruit Syrian Palace official Mariam Haddad. The two fall into a forbidden relationship, which supercharges Haddad's recruitment and creates unspeakable danger when they enter Damascus to find the man responsible for the disappearance of an American spy.

But the cat-and-mouse chase for the killer soon leads to a trail of high-profile assassinations and the discovery of a dark secret at the heart of the Syrian regime, bringing the pair under the all-seeing eyes of Assad's spy catcher, Ali Hassan, and his brother Rustum, the head of the feared Republican Guard.

Set against the backdrop of a Syria pulsing with fear and rebellion, Damascus Station is a gripping thriller that offers a textured portrayal of espionage, love, loyalty, and betrayal in one of the most difficult CIA assignments on the planet.

What listeners say about Damascus Station

Trying to read too much truth or policy into this story might take your mind off of a first rate espionage suspense story. Most certainly, the depictions of our involvement in Syria and its influencing factors are real enough. But it's the characters and twists and turns of the plot that make Damascus Station. The story takes a bit to develop but don't let that deter you. Once ramped up, the story is fast-moving with twists and turns that are not always predictable.

As for the characters, I liked that there were no "superheroes'" but rather believable yet colorful characters. In my opinion, the bad guys were just as rich as the good guys. The central figure, Sam, is a very likable character. Though he has a few flaws as a human being, he's a believable central figure. Miriam, Bradley and the extremely colorful Proctor are but a few of the characters that deserve an audition. On the other side of the ledger of "us against them," Ali is also a character that should endure.

Narration is always a hit or miss on new books but I thought Andrew Wehrlen did a very fine job. He managed voices for a broad base of ages, gender, and accents extremely well. I would like to hear him in another McCloskey book featuring the same core characters.

If you are considering this book, I would recommend buying it on Kindle or a hard cover. The book was ruined by the bed narration.

This was an awesome excellent book. Loved how real it felt. Best spy novel I’ve listened too in a long time. Can’t wait to see what he comes up with next!

An interesting story, but ruined by the performance -- one of the worst that I can remember hearing. The narrator tends to hurry through sentences then comes to an abrupt halt, giving the narration a choppy feel. The narrator has no knowledge of how to pronounce French and was given no direction. That's a problem because a good part of the action takes place in France and there are references to France throughout the book. A string of badly mangled place names is a good way to destroy verisimilitude.

Excellent Spy Thriller, on Par with the Best

A great book, great plot. Well crafted story. Could have done with a little less love story and more spy craft, but I guess the love story was integral to the plot. I look forward to David McCloskey’s next book.

The only drawback was a poor narrator. He slurred words and didn’t give clear cut-offs so sometimes I had to back up and relisten to figure out where one story line ended and the next one picked up.

Very interesting story . The author is obviously knowledgeably . The performance was poor unfortunately. He kept dropping the end of the words. I had to slow down the speed and frequently hit the 10 second repeat button. to understand his speech..

Most real and current spy novel

I wasn’t wild about the narration, but the story is great. Exciting, well crafted and with strong characters.

I have to be honest, I don't read a lot of non-fiction, but this was especially good! The author pulls you in with a compelling story all the while remaining realistic.

Really draws you in