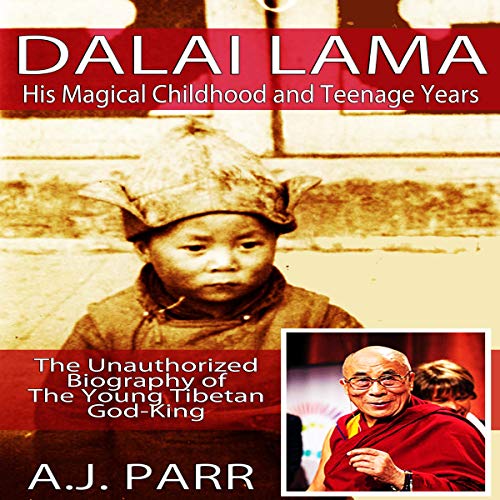 This audiobook reveals the main facts about the magical childhood and teenage years of the Fourteenth Dalai Lama, the youngest son of a humble farmer, born in a remote Tibetan village, who became the political and spiritual leader of his homeland when he was only a kid.

Its surprising content sheds light on the main facts and events that shaped his amazing early life, including:

Discover the magic and mystery behind the early years of one of the world’s youngest and most astonishing spiritual leaders of our time. Hit the add to cart button now!

What listeners say about Dalai Lama, His Magical Childhood and Teenage Years

I love this audiobook

1.I love this audiobook. It depicts the early years of His Holiness the Fourteenth Dalai Lama as he grew up in Tibet, up to his exile in 1959. Amazing!

I found in this audiobook

As a Buddhist I found in this audiobook countless gold nuggets that not only help to understand the life of the young Dalai Lama but also the many wonders of Tibetan Buddhism. I love it!

This is an extraordinary

I am quite shocked

I am quite shocked. The Fourteenth Dalai Lama grew up surrounded by magic, oracles, prophecies and reincarnated beings. Simply out of this world!

What an amazing childhood! Really wonderful! I am really glad I got this wonderful audiobook. Namaste!

I have always loved the Dalai Lama

I have always loved the Dalai Lama and his spiritual teachings. And this audiobook deserves my love too!

I did not know that the Dalai Lama had had such an amazing childhood. God bless him!

This is an awesome

This is an awesome audiobook about one of the world's most important spiritual leaders of all times. Superb!

I found so many things about the Dalai Lama thanks to this 1a audio book. I give it 5 stars!

I found this audiobook motivating and instructive about the Fourteenth Dalai Lama’s early life, his homeland and the people of Tibet. I think it is a magical place (or at least was when he grew up, before the Chinese invasion). I now have a better attitude about him and his little country for having heard it.

Ever since I saw

Ever since I saw “Seven Years in Tibet” I have always wanted to know more about the early years of the Dalai Lama. And this audio book is just what I was looking for.

A great text for anyone

A great text for anyone wanting to learn about the magical side of the Dalai Lama tradition, from how the candidates are chosen as reincarnated lamas and diligently educated as religious and political leaders of Tibet.

Such a magical childhood

Such a magical childhood! And what a tragic destiny for his dear homeland. Great buy. Highly recommended.

The author covers the basics of Buddhism at length and adequately, with a strong emphasis on Buddhist ethics. Mahayana philosophy is dealt with at some length.

Great story. Great man. I have listen most of the books written by the Dalai Lama and this one is a priced complement I am proud to have.

I enjoyed this audiobook

I enjoyed this audiobook. The content is simply written. It gave me such peace to listen to it.

It was very informative and I greatly enjoyed this as well as learned a great deal!

Now that I have learned that which I was personally able to absorb, I will definitely be listening again as I believe I have become more "absorbent" than before. Well done 👍

I love this audiobook.

I love this audiobook, based on the early years of the Dalai Lama, the Tibetan people and their astonishing culture. You will not be disappointed.