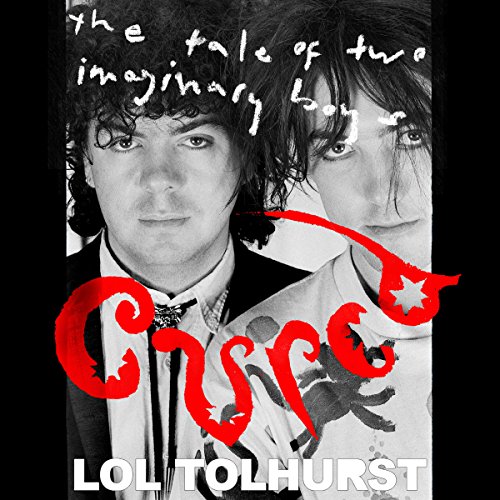 Coming of age in Thatcher's Britain in the late '70s and early '80s was really tough, especially if you lived in Crawley. But against the grinding austerity, social unrest and suburban boredom, the spark of rebellion that was punk set alight three young men who would become one of the most revered and successful bands of their generation: The Cure.

Cured is a memoir by Lol Tolhurst, one of the founding imaginary boys, who met Robert Smith when they were six. Lol threads the genesis of The Cure through his schoolboy years with Smith, the iconic leader of the group, and the band's most successful era in the 1980s. He takes us up to the present day, a riveting 40 years since the band's inception. The band's journey to worldwide success is woven into a story not only of great highs and lows but also of love, friendship, pain, forgiveness and, ultimately, redemption on a beach in Hawaii.

Cured highlights those parts of the creative journey that are not normally revealed to fans, incorporating many firsthand recollections around Lol's personal odyssey. From suburban London to the Mojave Desert, Cured brings an acute eye for the times to bear on a lifelong friendship, with tales of addiction and despair along the way. Cured is the story of a timeless band and a life truly lived.

What listeners say about Cured

Good read but some reservations

Great book, filled in most gaps about the Cure's early years. Lol is a great writer, perhaps nobody could of done a better job. My concern is the chapter where Andy Anderson gets sacked for umm basically being black and Andy having to deal with overt racism from hotel staff, which was apparently inconvenient to the band. If that's not what really happened, well Lol did not explain the situ well. My other comment is that Lol did not explain what it was like watching the Cure from 91 to the present day, he covers such a small proportion of the Cure's history and given by the time he wrote this book, he had made up with the band, why didn't he try and at least cover those missing years in some way, even as an observer or vicariously with conversations with the current band members? That aside, a great read, and encourage every Cure fan to do so

It's not that I disliked the book but, compared to other musicians' memoirs, this is quite a bland read. It has its moments, but they are too few and far between to make this book a worthy purchase for anyone other than an obsessive fan of the band. Lol himself sounds bored throughout.

Amazing book, loved every minute, made even better by the man himself telling the story. x

As a lapsed Cure fan who's been to see them 5 or 6 times years ago I wasn't sure if this would be that interesting to me but I absolutely loved it from start to finish. In particular it's wonderful how Lol's love for Robert leaps out from Lol's words again and again.
It was heartbreaking to hear the details of their fallout and I couldn't stop the tears rolling down my cheeks when they made up.
There are numerous moments of deep sorrow and many of soaring joy, both had me crying, I wanted to give Lol and Robert a huge hug after listening- and the rest of The Cure and the other characters!

I have of course been revisiting the music since I started the book and I've remembered why I love it so much.

Interesting and inspiring story of the Cure and Lol’s own rise, fall and redemption. If you’re a Cure fan or just need some hope then this is a great listen.

You've gotta love Lol but he really is a contradiction.

I had expected this to be about how music is the cure, Lol's passion for music and his life in music. There was more finger pointing, point scoring and me, me, me than music musing. A touch of Ringovirus.

Once such a mischievous, lovable rogue ... so much Lol could proudly tell music fans, a missed opportunity.

it should be the evils of becoming an alcoholic

this is the path of a sad lad and should be a cautionary tale to anyone that likes a tipple or two, it goes on a bit but accuracy is the name of the game, Robert comes across as perfect so maybe there's more to it than he's saying after all .

This is a really well crafted linear account of life before, during and after being in a band. Of childhood friendship, growth, tragic flaw and redemption. I salute Lol Tolhurst for his honesty, thoughtfulness and for reminding me of how much I love the creativity he's been involved with. He has the perfect narrative voice for the story, which really adds to the whimsy of many of the misadventures and earnestness of his confessional passages. I thoroughly enjoyed this book, highly recommended to those with an affinity or interest in the music of The Cure and it's offshoots

I was a staunch Cure fan from the time of the first album and saw them perform several times in the 80s. I would have liked to have heard a little more about the songwriting process the Cure used, and maybe a little more detail about the recording of the records, but what is told here is interesting.

The later story of Lol’s excesses and depression prior to leaving the band sounds honest and enlightening.

I listened to Lol narrating the audiobook version. Sometimes that seemed like a good thing, though considering he says he is now happy (and sober) I had hoped for a little more enthusiasm in his voice here and there.

I also thought he raised Sir Robert Smith a little too overtly a little too close to sainthood, but evidently he’s a good bloke and Lol’s best friend over years and years.

I won’t need to read/hear another book about Robert’s genius for quite a while, it is said quite often enough in this one.

Nevertheless, I very much liked the book and was very interested in Lol’s process of realising the mistakes he was making, realising he needed help and realising the problems he had caused others.

That plus the inside info on the origins, friendships and circumstances of the Cure’s early career made this book a very worthwhile purchase. Money well spent. Thank you Lol (Laurence).

loved the narrative,the cure are an iconic band, Robert Smith is my hero.Absolute class.