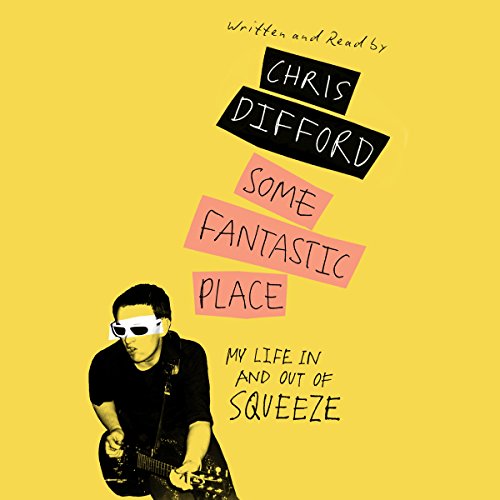 'King George Street in Charlton, South London, was my first home. Six prefabs, three pubs, a school, a church and a yard where the electricity board kept cables. Two long rows of terraced houses faced each other at one end of the street, and at the other, big houses with big doors and even bigger windows. There was a phone box next to one of the pubs, and when it rang everyone came out to see who it was for. It was a tiny road - at one end of which there was Greenwich Park. It was heaven being there; its beauty always shone on me from the trees at sunsets and from the bushes in the rain. I was there in all weathers. It was 1964, I was 10 years old and this is when my memory really begins. The previous decade is built up from vague recollections that lean heavily on the imagination.'

Chris Difford is a rare breed. As a member of one of London's best-loved bands, the Squeeze cofounder has made a lasting contribution to English music with hits such as 'Cool for Cats', 'Up the Junction', 'Labelled with Love', 'Hourglass' and 'Tempted'. Some Fantastic Place is his evocative memoir of an upbringing in South London in the '60s and his rise to fame in one of the definitive bands of the late '70s and early '80s.

What listeners say about Some Fantastic Place

well I have been a fan of squeeze for 30 yrs . I own every album. I'm a squeeze fanatic. seen them live prob 15 times and some acoustic sets too.... so too dip behind the scenes was marvellous.. always loved chris and glenn.. I must say brilliantly read by Chris .. I enjoyed this book so much. read over 3 days.. I just could not switch off.... brilliant too see Chris in a happier place with his wife and kids. and the love affair with squeeze back on full swing ..and his friendship with glenn as strong as could be.. God bless Mr difford.. I loved your story

With Chris Difford reading this book made it all the better, its not polished like an actor reading a story but what comes across as an honest account of his life, and what a life!
I would say for me this is the best book i have listened to since starting my audible membership.

I've been a Squeeze fan since I saw them supporting The Tubes at Southampton Gaumont, way back in 1979. Seen them around 40 times as well as both Chris and Glenn's solo shows. The book is an excellent read/listen. Chris is so open and honest about the challenges that he has faced over the years; from the alcohol and drug problems to the many relationship issues with Glenn, his partners and others. It is a real insight to the loneliness and pressures of being in a successful band.

A comforting listen from a great wordsmith

Heart on sleeve stuff. Chris has had some fantastic ups and serious downs. He crafts descriptions beautifully. Listened on commute each day. Recommended

Really enjoyable,well read by the author,things he got up to I hadnt heard about before! often moving & honest account of one England's /Londons great bands ..nice one Chris

Been a Squeeze fan since 1981 so a little biased but I loved this book from start to end. When an author takes time to narrate their own book I really appreciate It as it brings more emotion to it. It was honest, Frank yet very personal and left no stones unturned. Amazing what 50p can bring.

Chris Difford's brilliant lyrics echo through this open and accessible tour through his various adventures. There is the combination of wry humour, sharp observation and pathos that made a Squeeze song so different to their contempories in the charts at the time. To have Chris's low key delivery in this audio version is like all my favourite audio books where someone starts telling you their story in a quiet bar (albeit without the alcohol) and all you have to do is listen. Totally recommend this and now desperate to catch next solo tour.

Well I guess I would!

I found this story beautiful and in places brutally honest. It took me just over a day to finish it, I had to put my life on hold I was so besotted by it

I chose this book as I have enjoyed the music of squeeze and seen Chris perform and talk solo. In the uncomfortably intimate solo show he exhibited depth and melancholy which intrigued me and the penny dropped that behind the performer there is an accessible human story that I might relate to (not just a dancing monkey).

Chris’ voice is deep and dare I say dull at first - but you must persevere because while the range and delivery of the voice actor is not there - the emotion and honesty is - but you need to listen.

The book is an honest, humble and hopeful account of one of our iconic British lyrical poets which can’t help but cause you to get out your old albums / CDs and enjoy the Lyrics again - but this time in a different context.

Tried hard to persist with the offering as I was a big Squeeze fan but Chris's delivery is so morose and monotonous, I felt close to suicidal after half an hour. Might try again at double speed!

I enjoyed the beauty of this man's words.

I happen to be a huge squeeze fan and enjoyed the story about The Man Behind the words.