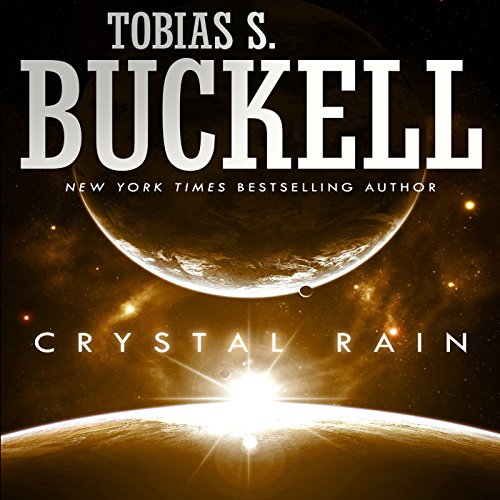 Crystal Rain is the much-anticipated debut novel by Tobias S. Buckell, one of science fiction’s newest and most promising talents.

Long ago, so the stories say, the old-fathers came to Nanagada through a worm's hole in the sky. Looking for a new world to call their own, they brought with them a rich mélange of cultures, religions, and dialects from a far-off planet called Earth. Mighty were the old-fathers, with the power to shape the world to their liking - but that was many generations ago, and what was once known has long been lost. Steamboats and gas-filled blimps now traverse the planet, where people once looked up to see great silver cities in the sky. Like his world, John deBrun has forgotten more than he remembers. Twenty-seven years ago, he washed up onto the shore of Nanagada with no memory of his past. Although he has made a new life for himself among the peaceful islanders, his soul remains haunted by unanswered questions about his own identity. These mysteries take on new urgency when the fearsome Azteca storm over the Wicked High Mountains in search of fresh blood and hearts to feed their cruel, inhuman gods. Nanagada's only hope lies in a mythical artifact, the Ma Wi Jung, said to be hidden somewhere in the frozen north. And only John deBrun knows the device’s secrets, even if he can’t remember why or how!

What listeners say about Crystal Rain

Looooooooooong lead in before the action starts.

If you read any of my other reviews, you will quickly realize but I have a short attention span. Most of the books I enjoy start off pretty fast and that's needed to keep me interested. Sorry, I'm just one of those kind of people. This book almost lost me, but I'm glad I stayed with it because it was actually a pretty imaginative story.

The plot about humans who have settled on another planet far in the future only to be cut off from the rest of the universe because of an ancient war among other aliens is an interesting premise. These humans are nothing but pawns to a superior alien race and are being used like soldiers and slaves. They have developed more like the people of the Stone Age, but with limited technology. Their are guns, steam engines and blimps, but not much more than that despite their ancestors coming through wormholes in starships.

The world building and introduction to the various characters took a really, really long time to develop. During the first two thirds of the book you could only catch glimpses of where the story was heading. Those small glimpses were enough to keep me interested but just barely.

Crystal Rain had less science as far as science-fiction goes, and focused more on cultures and ancient beliefs. If it wasn't for Pepper, who is a complete badass, I probably would've bailed on this story before finishing it. But he was an intriguing character with high-tech bio enhancements which made him almost superhuman and immortal. This technologically advanced human working among "primitive savages" was an needed dynamic.

The narrator was incredible. I could listen to him read the phone book. His baritone was just plain manly and his mastery of Caribbean dialect was spot on. The one small issue I had with him was the difference between women's voices and higher pitched male voices was difficult to discern. That's nitpicking because overall he was terrific.

Now, my biggest problem with the book was what another reviewer also mentioned. You had a planet full of human colonists who where descendants of the people of earth from nearly 500 years ago, give or take a century. But even that long past is still our future. I'm guessing the humans left earth sometime in the 23rd century, but the author never really says that. The various races of the story where primarily Caribbean Islanders and Aztecs. Huh? Aztecs? Where in the world did they come from? The were long gone before the 17th century, so how did they become the antagonists of the 26th century?

If I decide to continue the series I'm hoping the author has explained that somewhere in the 2nd book, because it just doesn't make any sense at all. He literally could've used any other culture from today and the story would have made much more sense. Why not Russians or Mexicans or Canadians or Kenyans. Why Aztecs?

If you can get past that weird and misplaced cultural inclusion in the story, you're in for a pretty inventive piece. It's a good start to what I'm hoping is a really fulfilling series. I'm not ready to jump right in the next book to just yet, but I will probably eventually finish the series. Call it 3 1/2 stars from me.

Creative and hard to put down!

Great book! Such a creative twist on some literary themes including classic old fashioned adventure novels combined with science fiction and other themes. And how often do you find a science fiction book that centers around Jamaicans and Aztecs! A fun listen and hard to put down, with a great narrator for the various accents. For other parents out there, I wouldn’t recommend the book for kids due to the violence (including human sacrifice by the bad guys) but on the positive side there are good and heroic people who fight evil, and it doesn’t have inappropriate sexual content. I’m looking forward to reading more by this author!

first things first. if you don't like the sound of a Caribbean accent then you should probably move on. For me I love the accent. In this book it is prevalent and the narrator seems to speak the language / accent perfectly. I don't know if the narrator grew up in the Caribbean or is just an expert in his field and can carry it off.
the story is just a really fun adventure. the type where you can just turn the book on and listen and Drift Away and not really think about much. you know it's a great book when you don't spend any time thinking about the book you just dive into the story and it carries you away. This is that type of story.

I struggled to finish this book. there are a few interesting fight scenes but never-ending uninteresting spaces between them. also you better have a very good imagination if you listen to this book as the tanks, guns, air ships, or any other thing of interests is hardly described

Great first story of a series

Very good narrator with a talent for accent and roles, which was absolutely necessary for this perticular story. Unique story style at least from any I've heard and read. I will follow this series for sure.

I found out about Tobias Buckell from the Metropolis series which is a very well made collaboration of several sci-fi authors made for audio book specifically as I understand it.

I and I enjoyed this story very much!

Bravo! -- This works on several levels. It's a great mix of the hyper-modern and the simple pre-technology worlds. The culture, story arc, plot, and characters are all fully fleshed out, consistent, and well described. The story involves war between two cultures we don't usually hear much about in Science Fiction, one with roots in the Caribbean Sea and the other with roots in the Aztec world, marooned hundreds of years ago and just beginning to rise back to a beginning industrial technology level on a planet as a result of a larger interstellar conflict.

The accents are well read and the characters interesting. An attempt is made to bring those cultures forward without losing too much of their identity. The story works fairly well at that and also as a terrific science fiction story about rebuilding and lost technology.

The only thing missing, in my opinion, was the use of the linguistic concept of "I&I" (pronounced eye-and-eye) that is unique to Caribbean cultures. I've read other places that its use is a reference to the combined nature of the individual and his God as a both separate and unified. I think it's a beautiful addition to language and that the author missed an opportunity to incorporate it here. In all other respects, this is a fantastic novel.

Enjoyed the story & the book's universe. Loved the interaction & the backgrounds on the characters Dihanna, John, Pepper, Oaxctyl & Hayden. The book moves at a great pace & there is lots of action & battles. Also the multiple points of view really work well.

Prentice Onayemi does a wonderful narration. I would definitely listen to other books narrated by him.


Disclosure: I received a free download of this newly re-released Audible book from the author. In spite of that, the views expressed here are my own & I did not commit to posting a review for the download.