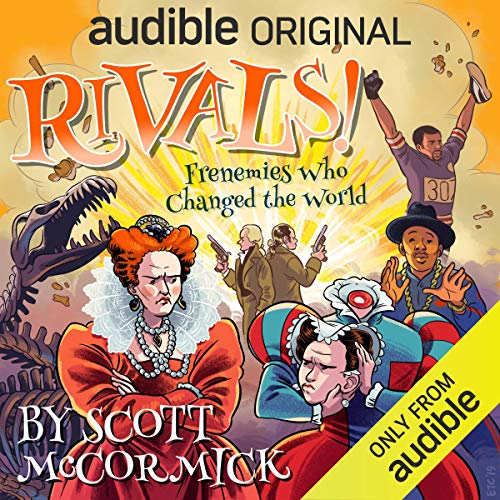 Rivals! Frenemies Who Changed the World

Exclusively on Audible, hilarious history for ages eight and up

Did you know that most of our dinosaur fossils were discovered because two grown men absolutely hated each other? It’s true!

Rivals! Frenemies Who Changed the World is a riotous audio exclusive, like if Monty Python taught your history class. Each volume of four 30-minute histories will dig into the petty name-calling and grumbling grudges that led to many of the world’s greatest advancements, all delivered with a cheeky sense of humor.

Choose sides: Cope or Marsh, the jerks who discovered so many dinosaurs; Hamilton or Burr, whose rivalry fueled American politics; Queen Elizabeth or Mary Queen of Scots, who fought to rule England; Adidas or Puma, whose rivalry changed the world of sports and fashion.

Kidnappings, rock fights, duels, and explosions, Rivals! shows world leaders at their absolute best and their worst, often at the same time.

What listeners say about Rivals! Frenemies Who Changed the World

Almost a 'Horrible Histories' but for the ear. Only available on Audible, I believe, and the sound effects and narrative asides will probably amuse the children listening (I found them a little annoying).

The stories, though, were great. While I knew the history of Queens Elizabeth and Mary, I hadn't heard the stories of the Adidas/Puma rivalry, or that of the paleontologists and American politicians covered here.

My favourite was the Adidas/Puma story, but each showed a fascinating insight into how feuding can lead to innovation and advances (though not always positive ones).

Each story gives background and complete history of the feud (certainly important when historical - the Elizabeth/Mary segment had fun with Mary/merry/marry wordplay). Each was also accessible enough for a 10 year old to follow.

Only 3 hours in total, I was certainly keen to learn more about some of these stories when finishing, and I believe young people may feel the same too. There are duels here, details about elections, royalty, dinosaurs, a wealth of topics to spark an interest in the true stories of history.

Personally, the silly noises ("Jersey!") didn't add to the listening experience for me, but I'm really not the listener the producers were considering when putting this together. The narrator is clear and speaks with enthusiasm, which is the most important aspect, as there is no written material for a reader to refer back to.

Short but enticing Terry Deary-esque look at historical arguments that made their mark - for ages 9-13.

that was so good. 👏👏👏 great fun and actually informative lol
like a guilty secret

Kids and I both enjoyed it

I couldn’t quite work out if this was meant for adults or children- I found the topics and content interesting and I thought that my children would moan about it (we were listening as a family time activity) but there were enough silly voice outbursts that the children were in fits of laughter which meant it was surprisingly suitable for us all. Give it a shot - I mean it’s free what’s to lose?

Awful book startlingly BAD. I HATE IT NEVER read it again! I don't like it!

It went into good detail about interesting rivalries. It was easy to understand but a bit weird if you arent american

I thoroughly enjoyed listening to these stories. It peaked my interest in these historical figures. I recommend picking it up.

Sorry I waited so long to listen to this

I put this in my Wish List quite a while ago but every time I reviewed my list I couldn't get excited about listening to it. Finally, when nothing else appealed to me I bought it. What luck for me because it was so entertaining and educational. Possible spoilers coming up! There are 4 "cases" - the first one I had never heard of - Cope v. Marsh, 19th century paleontologists. Sounds boring, right? Far from it. I think the next was Queen Elizabeth v. Mary Queen of Scots. I was quite familiar with this one but it was till entertaining and I got a few new nuggets. Puma v. Adidas was new to me and fascinating. Burr v. Hamilton we all know but I for one did not now the exact details. My only complaint about this is that it is only 3 hours - I WANT MORE! Hoping for a sequel.

This selection was marketed to children. It is very entertaining and educational, and my kids have enjoyed it. However, if I had known about the cursing, I probably would not have let my kids listen to it.

Bought this on a whim knowing I had some drive time for the holidays with my 8 year old son. This has been an amazing listen for all of us! We have learned some new things and been thoroughly entertained at the same time. Our kids are asking if there are more - and we certainly would love to see this become a series!

Such a fantastic book to listen to with all of my children aged 5 to 12. I learned lots and it piqued my interest to read some of their biographies!

I did like it a lot but my only nitpick is that the dramatizations were over the top at times. Overall, it is a quick read and audio to get through, and get those who are new to these stories interested in these historical figures and those who already are to renew their interest and refresh their knowledge.

Good for all ages

The author has done a wonderful job of turning chunks of history into great stories good for all ages.

I wish I had had a teacher like this in high school or college. I learned a lot while being entertained!
This would be great for almost any age.

The extra sound effects are distracting

The story is interesting and well done with some good humor but the extra effects of voices and sounds got old in the first story. Overall it’s a solid free original just lose the extra sounds and voices. I almost didn’t finish it when I kept hearing “Jersey” shouted in a stupid fake accent each time the state was mentioned.

Things I never knew I would like to know

I picked this freebie because it looked more interesting than the others. Truly, to my pleasant surprise I found myself VERY much entertained by this history lesson. Had this been the format for the history classes required during university studies I may have been convinced to switch to a history major. Listen to this offering, it will make you smile, teach you some scarcely known facts and fully entertain you for several pleasant hours!