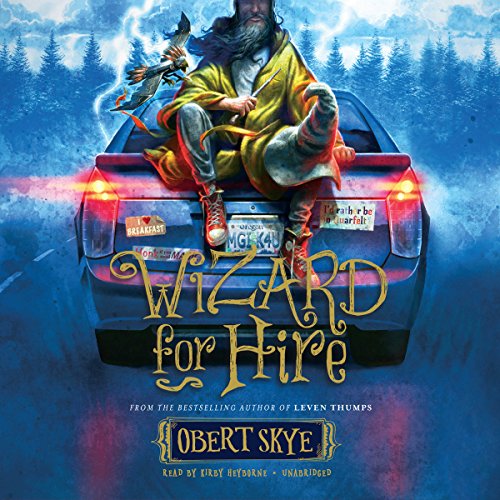 Fourteen-year-old Ozzy lives near Portland, Oregon, and is desperate for help. His scientist parents have been kidnapped after discovering a formula that enables mind control. Their work was so top secret that Ozzy is afraid to go to the police, but without help, he fears he'll never find his parents. Then he stumbles across a classified ad in the local newspaper that says "Wizard for Hire. Call 555-SPEL." Ozzy has read about wizards in books like Harry Potter, but wizards couldn't actually exist today, could they? After Ozzy meets the wizard Labyrinth - a.k.a. Rin - he's even more skeptical.

Sure, Rin dresses like a wizard, but the short robe and high-top tennis shoes seem unorthodox, as does Rin's habit of writing notes on his shoes and eating breakfast for every meal. Plus, Rin doesn't even cast any magic spells, which means that the unexplained coincidences that start happening around Ozzy are just that - coincidences.

With the help of a robotic talking raven invented by Ozzy's father, a kind and curious girl at school who decides to help Ozzy, and of course, a self-proclaimed wizard who may or may not have a magical wand, Ozzy begins an unforgettable quest that will lead him closer to the answers he desperately seeks about his missing parents.

Initially this novel has a slow pace and I was unsure about the plot or to even continue but the story eventually builds up to a powerful mystery and the ending is highly satisfying! The narrator grew on me but he was not my favorite. His Clark voice was my favorite.

Not a fan of this book. The narration was great but the story was just depressing. You think that it is a fantasy but really it's the story of a sad man leading a young boy around with the promise of magic that will never come and an end result that is just melancholy as hell. The main character is in a bad way and the only person he has to rely on is a delusional man/ deadbeat dad who makes up a fantasy world to escape his crappy life and the fact that his wife left him. Maybe I'm just projecting my own disgust at deadbeat dads seeingbas mine was never there but this book just makes me mad.

it is really good its a kindof detective book and its really funny its good.

Great narration but this is not a fantasy book!

Interesting story with some nice humor for readers of all ages. Kirby Heyborne is a fantastic narrator bringing the story to life. However I bought this under the impression that it was Fantasy and that is not the case, still an enjoyable listen.

I really enjoyed this book. looking forward to starting the second one. I will definitely be watching for the third one

I love Kirby Heyborne's performance. Iwasn't so impressed with the story. It seemed to lag at times, and had to worry of descriptions about each meal.

never-to-be-forgotten chase scene near the end is outstanding in a story filled with memorable characters and plot. overjoyed to see a sequel!

it was quite a surprise

I enjoyed much of the story, I felt a little lacking at the end but the book kept me guessing and entertained.

it is a good book.