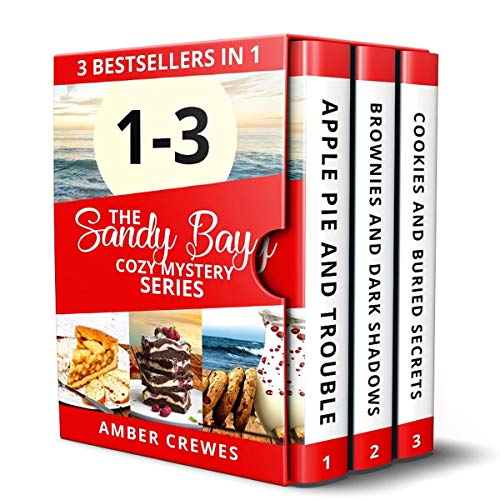 Discover how Meghan Truman, Sandy Bay's latest resident and new bakery owner, navigates her way through three murder mysteries as she gets to know the quirky characters in her adopted hometown after failing to make a career as an actress in Hollywood. The town's local detective, Jack Irvin, has an eye for Meghan, but will she find time to build a romance while she tries to clear her name?

Apple Pie and Trouble (Book 1)
Meghan Truman always had a dream to become a Hollywood actress. Hollywood decided she wasn’t good enough. She left Hollywood broken but with a burning desire to start afresh in the Pacific Northwest, pursuing her second dream - opening a bakery.

She never expected that the owner of a rival establishment would be found dead and all eyes would be focused on her as the prime suspect.

As the new girl in town with a new bakery store, she’s determined to clear her name and find the murderer; otherwise she’ll have to leave Sandy Bay penniless and pitiful and possibly the murderer’s next victim.

Brownies and Dark Shadows (Book 2)
When Sandy Bay’s crème de la crème congregate to raise money for charity, Meghan Truman is proud to have her tasty desserts the talk of the party. She’s not so proud when the wealthiest couple in Sandy Bay are discovered dead and rumors circulate around town that her brownies are the cause of this tragedy.

This murder case casts a dark shadow over Meghan’s budding romance with handsome Officer Irvin who’s disappointed that she’s once again at the center of another murder investigation.

With everything to lose, Meghan must work hard to clear her name, restore broken relationships and solve this murder mystery before everything she’s worked so hard to build comes crumbling down.

Cookies and Buried Secrets (Book 3)
When a beautiful stranger sashays into a birthday party, Meghan Truman, along with other guests, is surprised to discover her relationship to the birthday celebrant.

This beautiful stranger attracts more shady characters to Sandy Bay. When one of these characters is found dead in an alley, the whole town is set on edge.

Will Meghan’s attempt to link the owner of a golden antique gun to the murder prove helpful to handsome Officer Irvin’s investigation or will the discovery of a buried secret lead to more murders?

A wonderful 3 book set of pure listening fun! I loved listening to each book! I was surprised by who the murderers were in each story and can't believe I didn't have any figured out!

These three short and entertaining cozy murders will make your day. Meghan our bakery owner seems to have a knack of solving who done it. Each book has an entertaining and clever cozy to read and enjoy these are great stories for quick reads. The books are simply just good clean fun they are books that almost everyone could enjoy. The team of Amber Crewes and Elena Marino has given us a fun audiobook to listen too. If you like cozies this is a great audiobook to have.

I loved this series. It was fun and funny. The characters blended well together. I will tell my friends and family to read the books. Thank you Maria Keesler

I did not like the narrator. I was put off by the immaturity and narcissism of the characters. I was lost without character development. I'll avoid this writer and this narrator in the future.

These three stories are very cute mysteries. I had read one of them and the audiobook was just as I imagined all of the characters. Meghan is a little naive and Karen is a little over the top with the exercise but it adds to their charm.

Apple Pie and Trouble - short, fun cozy with the kind of story line that only happens in cozy mysteries and Hallmark world. This is the first book in the Sandy Bay series and introduces Meghan and the small town in the Pacific Northwest she has relocated to. It is of course full of all the stereotypical small town politics and gossip and includes the requisite attractive potential love interest - but all teasers for now. Lots of potential in this small town. Brownies and Dark Shadows - this second installment of the Sandy Bay series continues in the small Pacific Northwest town that Jessica Fletcher would find herself at home in, although by the end some of the events seemed more reminiscent of Home Alone. Another desert, another community member poisoned. This book is far from a rehash of the first book though - the motivations and events take a far different turn. Still no real romance, but it is seeming more likely. Great read for when you are in the mood for something short and light. Cookies ad Buried Secrets is book 3 in the Sandy Bay series and I'm starting to feel like I am getting to know some of the characters in this town only to have a stranger waltz in. And from there the plot twists and turns like a telenovela! The drama is high with this one. Fear not, Meghan will have it all sorted by the end of this quick read - and might even snag a date! Get ready to suspend disbelief and enjoy the ride :) The narrator's voice was well suited to these books. This is an honest and voluntary review of an ARC

I enjoyed listening to the reader's voice. She instills emotion into the reading without giving a full dramatic performance of the story. In terms of stories, the characters were pretty well defined. In my mind, the sleuth had an unhealthy disregard for her personal safety, given the ready availability of professional criminal investigation personnel. I would have liked richer world building.

This is a cute little cozy mystery series. A great introduction to the characters and the first three cases. I enjoy the characters that Amber Crewes has created. While the mysteries are not real taxing, the stories are entertaining. Elena Marino did a fine job with the narration. I was given this free review copy audiobook at my request and I have voluntarily left this review.

I found this audiobook to be extremely good. It has a great combination of murder, mystery, and suspense. The narrator does a wonderful job voicing each character.

This was a fun collection. Light and fun. Had me guessing as to who the culprit was. Enjoyed the narrator, too.