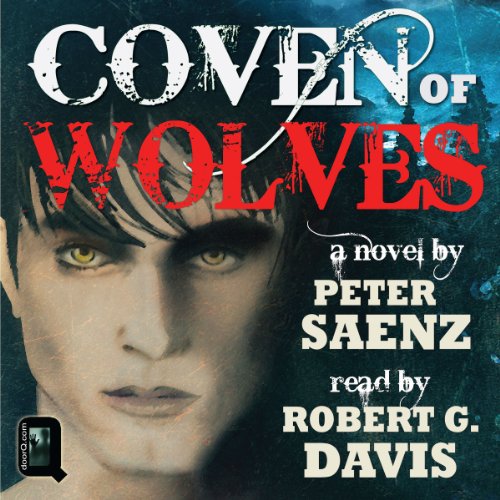 Devin Marshall is alone and on the run from a coven of dark witches. New to the world of magic, Devin tries his best to outrun and outlast the coven he once swore loyalty to in order to save his soul. In a last ditch attempt at freedom he discovers help where he least expects it, but also manages to upset a pack of deadly werewolves along the way.

Two supernatural cultures clash as Devin discovers hidden secrets about his past in an all or nothing attempt at survival. Coven of Wolves takes listeners around the globe and back into time as a new universe of hidden societies, powerful witches, and sinister creatures dominate the landscape in their fight for control of an unsuspecting world.

What listeners say about Coven of Wolves

I started listening to this book on the way to a comic book convention and it was the perfect way to get into the mood.
Coven of Wolves has all the magical elements I lived in Buffy the Vampire Slayer. (I still miss Buffy.) The lead character, Devon, it's mostly lost when the book starts. It's exciting flowing him as he finds his power and build a family along the way.
The sense of danger kept me listening just a little longer each time and the romance is warm.
The reader did a nice job bringing this take if witches, werewolves, ninjas and twinks to life. I had so much fun listening on drives and long walks.
I wish books like this had been around when I was in high school.

While easy to understand with clear diction, the narration lacks dynamics. Tied with a story written at a grade school level, the whole production loses it's adult theme.

I am a big fan of werewolves and magic and gods. from reading this story several times it keeps getting better. there is only one issue i have, when they are in the sequence with anna in the past how does devins inner monologue know the cusions bame before we here adam say it in the vision later. and whatever happened to luke's can, it got put in the scaber and thats the last we hear about it. but other then that it is a great story

witches, werewolf shifters, demons, magic, swords, action adventure it's all in this book

Anyone with an interest in paranormal creature adventures and lots of action will enjoy this audio book that just a bit under nine hours of the eternal struggle of goodness evil. This is not great literature but great enjoyment.

Loved the story. A facinating tale of witches and werewolves. The writing was poor- over written with way too much detail like a script. Grammer and speech was uncomfortable and unnatural. The reader did a poor job capturing the personalities of the characters.

I Was a bit surprised when i found out the main character Was gay since the summary didnt say but the story Was excellent, funny and a bit sad. As It turned out I loved It. Its realy worth getting. Also there are no explicit sex scenes only hinted at. So if your not open minded your sensibilities wont be offended.