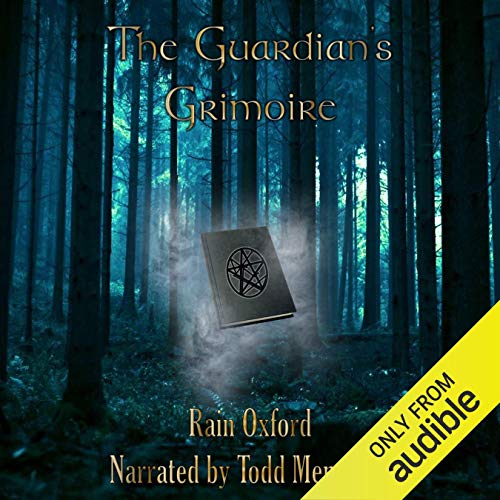 By: Rain Oxford
Narrated by: Todd Menesses
Try for £0.00

Dylan thought he was an average man with a dead-end job and no great aspirations. When he finds a black book lying innocently on his lawn with peculiar words and markings, he discovers the universe is bigger than he imagined. The guardian of Earth, who kept the book and its immense power safe from falling into the wrong hands, was killed. Now Earth needs a new guardian.

The battle to protect the book begins early for Dylan, as he must rely on his newly discovered powers to defeat the creatures sent to take the book. Dylan's life is sure to be full of adventure, danger, and magic.

To protect his book and the world that now relies on him, he must learn to survive in a foreign world, fight fierce horrors beyond imagination, master the magical arts, and ultimately battle a dark god who has already destroyed one world.

What listeners say about The Guardian's Grimoire

Love it really good story, also funny and had a good story line . hope the other audiobooks come out soon

Second time around and still loving it!

These days I listen to so many books, that I as good as never decide to start over with a book. But the last elemental book is finally coming out on audio soon and since I love these books and have recommended these to so many people already I thought I should start over to refresh my memory. I still love it and probably even more than before. I can see this series becoming one of the few that I’ll reread until the end of time.

This book is the first in a series that promises to be outstanding. Oxford's world-building skills are phenomenal! Initially, Earth seems exactly like we know it to be, a young man working a minimum wage job, with a pretty girlfriend and a crappy apartment. That is, until he is shown he can be something more, and that the world(s) isn't what it seems. I listened to this with my 12 year old son, during our long commutes, and we were equally enraptured!

I really enjoyed this book it was good world building and the characters were developed It I am planning on following this series and look forward to the next book.

This book was actually really good in my opinion. I really like books that contain magical themes. I'm usually more of a horror reader/listener. Although I'm really a horror, fantasy, mystical type guy. I thought the narrator did a superb job of making each character unique and distinct. Overall I enjoyed it quite a bit. I can't wait to listen to the other books in the guardian series.

This is Damn good book with awesome characters, personalities and world building that is not to over whelming. The VA ( Todd Menesses ) that was chosen narrate was awesome!

What a wonderful surprise. Truly entertaining. I wish the other books in the series were on Audible.

Good book. Lots of detail, believable characters, and magic. It's clearly the first in a series. The main character is in his early twenties, but there are a lot of references to historical events/people and psychology.

The narrator did a great job at keeping so many characters straight. The alien language is well thought out. Dylan's voice suits him well.

I would recommend this for people in their twenties who enjoy sarcastic humor and a LOT of imagination.

I really enjoyed Rain Oxford's The Guardian Grimoire! The story was amazingly adventurous and Todd Menesses did a wonderful job telling it. Oxford did a great job creating a vivid tale of of adventure that I will remember for a lifetime! I don't know if she made up some of the words in the story, but if she did, that made it even more intriguing to me. I'm definitely going to do some research about this genre because before this book, I really had only ever entertained works oike The Hobbit, Lord if the Rings, etc. But, this has reminded me that there's a world of fantasy and adventure stories to dive into! Great job, Rain!

The characters were fantastic and realistic. Could easily relate to Dylan. Epilouge was a great lead in to the next book. Fun and entertaining, worth the credit.

Would you listen to The Guardian's Grimoire again? Why?

Yes I would. It was 17 hours long and I'm sure there were things I missed the first time through I could pick up a second or third time through. I enjoyed the journey the book takes you on and enjoyed each world we traveled to.

I love Shinobu the squirrel cat with retractable teeth, the species that caused leprosy on earth. That was a cute touch. I want one If I have to pick a human character I like the most, I like Nano, he wasn't around for most of the book, maybe two chapters at most but I enjoyed his entrance and exit.

Which character – as performed by Todd Menesses – was your favorite?

I love the voices he did for the villain were amazing! I felt like his voice was perfectly evil and like a dragon!

Will Dylan be able to handle his new powers in time to save the earth?

great story, the characters were funny and Corky and engaging. I really like this book despite how long I thought it was going to be. the links allow the characters to develop and to contain the story. the end had a twist that I did not see coming and I think you will be surprised too definitely worth the time investment!