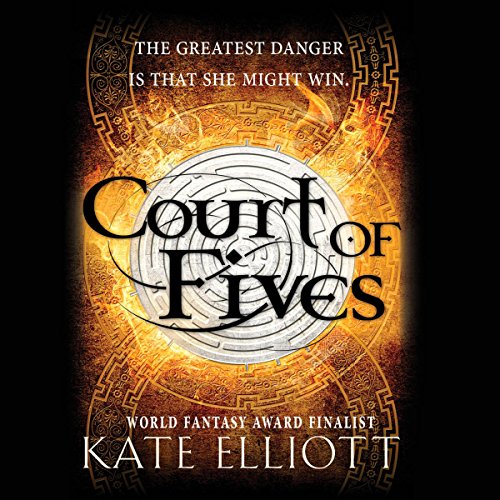 By: Kate Elliott
Narrated by: Georgia Dolenz
Try for £0.00

In this imaginative escape into an enthralling new world, World Fantasy Award finalist Kate Elliott begins a new trilogy with her debut young adult novel, weaving an epic story of a girl struggling to do what she loves in a society suffocated by rules of class and privilege.

Jessamy's life is a balance between acting like an upper-class Patron and dreaming of the freedom of the Commoners. But at night she can be whomever she wants when she sneaks out to train for The Fives, an intricate, multilevel athletic competition that offers a chance for glory to the kingdom's best competitors. Then Jes meets Kalliarkos, and an unlikely friendship between a girl of mixed race and a Patron boy causes heads to turn. When a scheming lord tears Jes' family apart, she'll have to test Kal's loyalty and risk the vengeance of a powerful clan to save her mother and sisters from certain death.

"Haunting. Epic. Impassioned. Layered. Breathtaking. This isn't just a novel; it is a coup d'état of the soul. Prepare to be ravished by Kate Elliott's Court of Fives." (Ann Aguirre, New York Times best-selling author of the Razorland trilogy)

What listeners say about Court of Fives

Another Great Book From Kate Elliott

I am a huge fan of Kate Elliott because I have always found her books to be incredibly immersive and riveting, like I resent having to go to work riveting. Court of Fives is no exception. the characters leap off the page (or out of your headphones) and the story is exciting. The narration was excellent and perfectly conveyed the emotions of the characters and the tone of the scene. I loved every tense minute!

A short description might show some similarly to The Hunger Games, but I confess I liked this better. Looking forward to book 2.

loved the story and also the reader of the audio book, she made great voices that made easy to understand who was talking even when there were 2 girls talking
I guess the only problem I have with the story is (spoilers! !!!!) how amazingly privileged the love interest in this story is, I mean, was is really expecting that she could let her dreams, her family and all behind her just to let him live a short fantasy? of course she had to do what she did, she would die otherwise! I am very exasperated by this guy. On the other hand I think that it is very lovely how our protagonist does all she can fit her family and I'm sorry she clings to her father so much, he doesn't deserve it but I think those feelings she has are very normal and real. Love the world -building, it is brilliant and I can't wait to read/hear the rest

I hadn’t read a Kate Elliott book in years and this item appeared in the two for one credit sale so I gave it a try. The story remained me a lot of the old fashion Greek Olympic Games and had the cut throat politics to boot. Unfortunately the names of all the female sister characters are so close in similarities that I was constantly confused on which sister was doing what in the story. However, the reader was great and the story intriguing. Well worth the time listening.

How run the world. Girls.

This is Good. really good. the first hour of the book is a bit dull but then the story takes off brilliant!
Miss Elliot is a new Star in fantasy and a plesent addition to my book shelf.

Relatively straightforward plot, very YA, fun, compelling at times. Really enjoyed some of the world building but felt it needed more to really help me get a feel. Pace as a whole felt rushed, would have appreciated lingering on some moments, breathing a bit, getting more nuance.

Has the required elements

Clever integration of the fives (Olympic rings?). Imagine if the Games were Katniss' life ambition. In a land of little joy, there is lots of courage; wrapped in the requisite trope of female degradation by wimpy male overlords; and a girl leading the girls from entombment. A recipe for literary awards, but I think it would be a great (but still not fun) story if the evocation wasn't so obvious.

intense music with a strong narrator.

amazing. already bought the next two books. strong narrator and love the music added for suspense.