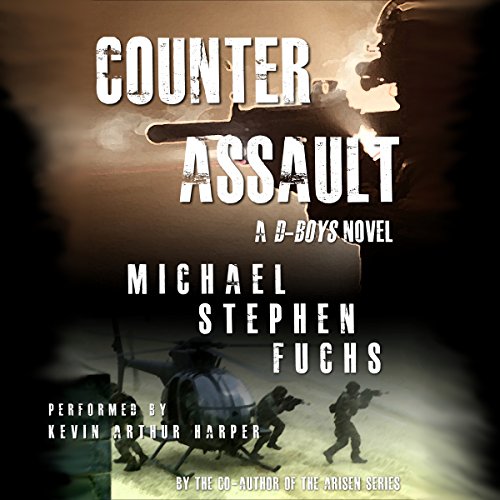 They are the most capable, committed, and indispensable counterterrorist operators in the world.

They have no rivals anywhere for skill, speed, ferocity, intelligence, flexibility, and sheer resolve.

Now one of them is the enemy.

Alpha team leader Sergeant Major Eric Rheinhardt is retiring from the Unit - hanging up his guns and jockeying a desk at the Pentagon. But just when he thought he was out, a ghost has emerged from his past (along with a lost love), dredging up a secret shame and past-due debt. Much worse, his old mentor and now nemesis Rod "the God" Tucker has turned up on the payroll of the messianic Iranian mullahs - training their proxy fighters in Hamas and Hezbollah, purchasing cyberwar talent and fissile material from the Chinese, and laying the groundwork for the fall of the Third Temple, the modern state of Israel.

What listeners say about Counter-Assault

Had this book for nearly a year now still haven't

What could Michael Stephen Fuchs have done to make this a more enjoyable book for you?

Who might you have cast as narrator instead of Kevin Arthur Harper?

If you could play editor, what scene or scenes would you have cut from Counter-Assault?

Best f'n book I've read! I'm a action and military history fan. So this book, much like the 1st d-boys was right up my alley. But this one!!!Book 2. Holy f'n hell. Great book!

superior to the first story in delivery and action

One of the Delta Force soldiers has gone rogue and is threatening the stability of not just the Middle East, but possibly the whole world.  The super soldiers of Delta Force, or D-Boys, are getting slaughtered in a pre-planned offense that goes horribly wrong.  The generals and government officials want everyone to stay out until there is more credible intel, but by then it will be too late.  Eric Reinhardt and his men risks life and career to do the right thing in a blaze of bullets and explosions.

Counter-assault is all action, super-soldiers and impossible odds.  But that is just how the D-Boys like it.  If you are a military novel enthusiast, this will be right up your alley.  There are lots of acronyms and weapons descriptions, military banter and enough testosterone to fill a fuel tanker.

It’s a fun listen, enough character development and back story to give the listener enough to make the action plausible.  There are also brief dialogue interludes where the listener gets some philosophical lessons about the necessity of a strong military and the wrong headedness of Islamic dogma, while stressing that human beings all want the same things.  The book doesn’t quite whack us over the head with it, but it creates a clear good vs. evil scenario.

The story is performed by Kevin Arthur Harper.  His voice is pleasant enough, but drags the narrative somewhat.  His characters are occasionally difficult to differentiate, confusing the listener a little at times.  He is at his best when the action goes hot and all is forgiven.  A good performance overall.

Counter-assault is book two in the D-Boys series but could be listened to independently.  The main characters are still here, but the focus is completely different.  The plots only slightly relate.  It is superior to the first story in delivery and action as well.  If you enjoyed book one, do not hesitate to pick this up.

I am A big fan of the Arisen Series and audiobooks in general. I really appreciate the level of detail and research that the writer put in to these books. My only issue is with the narrator. He is not a bad narrator, in fact I suspect he would or probably has done great work in more academic readings. But when he tries todo character voices they fall flat. Coming across as childish or way off character.

A very good story that keeps you interested throughout the book. While this is book two you do not have to read book one as it is about the same Delta team but completely different stories. I did like the first book too. The narration was well done and the narrator does a good job reading the book.

I hope there will be a third book in the series continuing the story and read by the same narrator.

Another Fantastic story by Michael Stephen Fuchs and Kevin Arthur does a much better job narrating this time.

Once I got used to the narrator it was a awesome set of books. I've listen to the whole arisen series and tissue series also definitely worth the listen especially Arisen. This book does have a tie in with the Arisen series as one of the Navy seals are also in the Arisen series

Excellent book but not narrated with a serious ton

Who would you have cast as narrator instead of Kevin Arthur Harper?

Michael Stephen Fuchs is a brilliant and talented author. As a veteran I can tell you that his level of military accuracy is a lot better than most authors.. you can tell that he puts due diligence into his research. Although the story itself is outstanding, the narration made it seem like one long whimsical joke that shouldn't be taken seriously. Kevin Harper, if I could make a suggestion please; although this book does contain some wit and banter, it is overall a serious book. This should have been read like 'The Good The Bad and The Ugly', not like 'Thundercats'. I would recommend that if you can't get behind a story and take it seriously, you might reject that narration job rather than creating a false perception for an otherwise outstanding book. Please take this with a respectful and constructive tone.

another awesome book from Michael Steven Fuchs. this guy keeps you on the edge of your seat

It was really hard to enjoy the book because I truly did not enjoy the performance. The attempts to make different voices were grating and made it hard to focus on the actual storyline because I got so annoyed. I am sorry because I really hate to critics anyone like that but I think he needs to work on his reading style.

With this reader, there are only about three vocal models. All the primary males apparently speak with the same cadence and all come from Kentucky or the Carolinas. All females sound identical, meek and very similar to all English-speaking Arabic characters.

Unlike other books in this shared world, it's nearly impossible to know from the narrator who is actually speaking.

For comparison, listen to those read by R.C.Bray. A strong voice actor elevates this type of mechanical, expositive-laden vehicle for hardware model numbers and three-letter-acronyms to something far less painful.