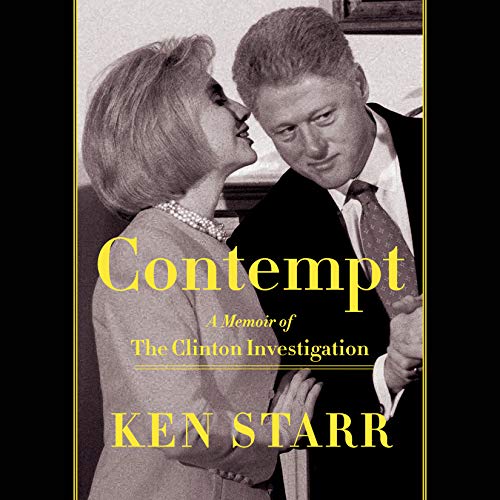 Twenty years after the Starr Report and the Clinton impeachment, former special prosecutor Ken Starr finally shares his definitive account of one of the most divisive periods in American history.

You could fill a library with books about the scandals of the Clinton administration, which eventually led to President Clinton's impeachment by the House of Representatives. Bill and Hillary Clinton have told their version of events, as have various journalists and participants. Whenever liberals recall those years, they usually depict independent counsel Ken Starr as an out-of-control, politically driven prosecutor.

But as a New York Times columnist asked in 2017, "What if Ken Starr was right?" What if the popular media in the 1990s completely misunderstood Starr's motives, his tactics, and his ultimate goal: to ensure that no one, especially not the president of the United States, is above the law?

Starr - the man at the eye of the hurricane - has kept his unique perspective to himself for two full decades. In this long-awaited memoir, he finally sheds light on everything he couldn't tell us during the Clinton years, even in his carefully detailed "Starr Report" of September 1998.

Contempt puts you, the listener, into the shoes of Starr and his team as they tackle the many scandals of that era, from Whitewater to Vince Foster's death to Travelgate to Monica Lewinsky. Starr explains in vivid detail how all those scandals shared a common thread: the Clintons' contempt for our system of justice.

This book proves that Bill and Hillary Clinton weren't victims of a so-called "vast right-wing conspiracy." They played fast and loose with the law and abused their powers and privileges.

Today, from #MeToo aftermath and Russiagate to President Trump's impeachment trial, the office of the American presidency is in crisis - and Starr's insights are more relevant now than ever.

“A firecracker of a book that tells the ultimate inside story.... Candid, illuminating, and authoritative.” (Rich Lowry, editor of National Review)

“If you think you know the story, you don’t - until you read this gripping account of what happened behind the scenes.” (Tim O’Brien, ABC News)

"Twenty years after the political tumult that made him one of the most polarizing figures in the nation, it is possible to see Ken Starr as a brilliant lawyer and reasonable man." (Michael Wolff, author of Fire and Fury)

What listeners say about Contempt

I remember this time in our country's history and it is good to hear Mr. Starr's view of it since we have all heard from everyone else involved. At the time, I was loath to see Bill or Hillary Clinton humiliared on the world stage for the crimes they had committed. Now, I am older and hopefully wiser. History and God will judge both former President Bill Clinton and his wife. I was interested in reading this book as soon as it came out and think it is good, though at times, tedious, as most historical books are. The time was tedious while it was happening. Now I know what Mr. Starr and his family were going through. I felt great sympathy towards the author and the people who worked with him. Overall, this is a book I am glad I read but very sorry it was a true story. I bought the audio book version and will be buying the book in hardback. While I didn't care for Mr. Starr's voice at first, toward the middle of the book I realized his voice was actually familiar to me and it was the only voice that could have told this story so well.

Every story has two sides

As a staunch Clinton supporter, Starr's book piqued my interest. The book is well-written, though I'm still trying figure out where Starr's reference to Nixon as "the nation's 38th President" given that all I can find is to confirm what I already know. Nixon is the 37th President.

Still, I found the book interesting, and with a grain of salt I listened to his POV, and I feel I have both sides of the story, although I am not persuaded by Starr.

The Full Truth At Long Last

This book was long overdue. The nation was riveted to the television during the investigation, but we only heard what the Clinton Administration wanted us to hear. In this book, Judge Starr finally answers the questions the Clintons didn't want asked. With the curtain pulled back, the full picture is rather unflattering for the First Family. The complete and utter lack of character and honor of Bill and Hillary shines through. Also apparent is just how singularly committed the investigation was to the truth, and just how far the Clintons were willing to go to hide the truth from the American public. Had this been written before the 2016 election, Trump would have won in a landslide. Thank you for your service to the country, Judge Starr, and thanks for finally revealing the full truth.

As a Millennial, I grew up just after the period in this book. I very much appreciated hearing a play-by-play review of the events as they took place in the 1990s. The level of specificity in the book is outstanding, and I have a much deeper grasp and appreciation for that period in American political, social, and legal history. Mr. Starr reads with feeling and with the conviction of true understanding of the subject matter, giving a fair view to the controversial subject.

Whoa ... I really had no idea. Living through this time of history and getting my views from the media at the time I really did not know the whole story. Who did? This is the first Starr has given the inside account. Love or hate the Clintons, love or hate Starr it is worth the read. Starr is the narrator which I think adds to the story.

Kenneth Starr is the Star

Why would you want to go back in time and hear this stuff all over again. Well, we’ve never had the opportunity to hear it from the Judge himself. Fascinating tale. Can’t make this stuff up as they say. Still unbelievable what this corrupt couple has gotten away with over the decades and they’re still not behind bars. A good reason Judgement Day. Great to have the story in Judge Starr’s own voice. Starr, an honorable man and glad to learn a little about him as well.

This is a must read

Everyone should read this.

I won't insert my politics into this review. This is a must read for everyone and a good historical review.

An important perspective of a precedent setting time in American history and politics. I'd toy seek to understand what happened, Ken Starr's version of events and his analysis deserve consideration.

I remember vividly how to he story unfolded, and it was very interesting to hear it from a main character.